Is it possible to move some steam games to a different library location (without re-downloading them?) [duplicate]

I would like to move some of my lesser-played (but still downloaded) Steam Games from my SSD to my larger, secondary 500GB "data" hard disk in my machine. I have set up a new library location through Steam > Settings > Downloads + Cloud tab > Steam Library Folders > Add Library Folder and created D:\Steam Library as a location. I can choose to download and install games to the default C:\Program Files (x86)\Steam location as well as the new D:\Steam Library without issues.

I have copied the files from (for example) "C:\Program Files (x86)\Steam\steamapps\common\Awesomenauts" to "D:\Steam Library\SteamApps\Awesomenauts", attempted to validate the game files (which should apparently check both library locations) which fails and re-downloads the game files.

I know you can symlink it but as now Steam will allow you to set and install to different libraries, I was hoping there was an easier way to move my games.

You're missing a couple of steps:
First, if the game was originally installed to C:\Program Files (x86)\Steam\steamapps\common\Awesomenauts, you need to move it to D:\Steam Library\SteamApps\**common**\Awesomenauts (except without the asterisks, of course). In general, if you chose something as a secondary Steam library location, you must move game files into something\SteamApps\common in order for Steam to see them.

Second, you might be missing a couple other files; Steam stores game configuration information (including the fact that the game is installed in this particular library) in a bunch of little .acf files in \SteamApps. If you don't copy this file over to the destination library's \SteamApps folder, Steam won't realize the game is installed in your bulk library.
Unfortunately, these files are not named after the game they refer to; however, they are just plain text files, so if you only have a few games installed you can probably find it manually by opening them with Notepad. The game's name should be under AppState->UserConfig->name. 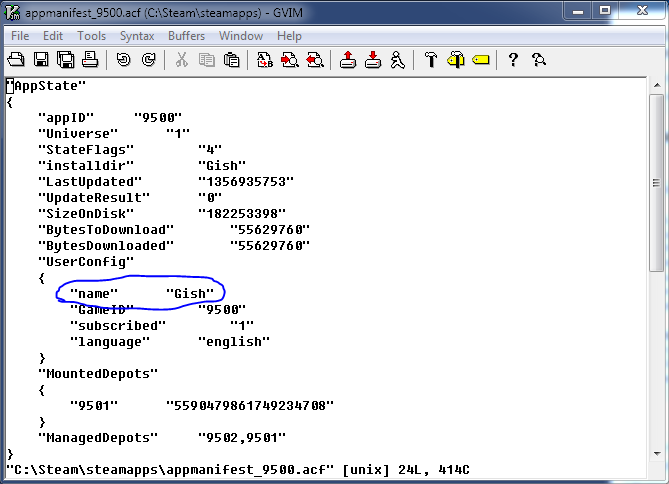 Doing things manually probably isn't going to work well if you have a ton of games installed, though, so in that case the easiest thing to do is to open up a cmd prompt (it won't bite) and use the built-in findstr command. Make sure to use /I since you never know how they're capitalizing things. The files you want to check will be on the left, in a lighter colored font.

Some games will have .ncf files instead of .acf files; those are usually named after the game and should be easy to spot, and they'll need to be copied over as well. Saints Row the Third uses .ncf files, for instance.

As long as you get those things right, the game should appear in your Steam library; if you right-click and go into the game's properties, it'll tell you which disk library the game is installed to. I have successfully done this to move Far Cry 3 from my bulk disk to my SSD.

Note that games with .gcf files are native Source games, and I wouldn't mess with them - just do a re-install.

As you said already, you can use a symbolic link. And it is by far the easiest solution. I've been using this for a long time, even before steam allowed you to select a specific folder for your game. I install all games on my big HDD and copy only some games to my SSD to improve loading times.

And with a symbolic link, you don't have to modify any steam config or use external tools. In my opinion, it's by far the easiest solution, as steam will internally just use the old folder and you can always copy it back if you want or need.

To open windows command as admin, go to the run box, type cmd and press CTRL+SHIFT+ENTER

Wikipedia has more details about mklink and symbolic links

Currently there is no easy way to move between steam libraries.

I personally user this application to move games from my SSD to HDD (and back if need be). Steam Mover : http://www.traynier.com/software/steammover

Backing up games and re-installing them may work, but as far as I know, only games that have migrated to the new install system will even offer the option to be installed to a secondary drive.

180
How can I move an installed game from one Steam library folder to another?
2
How do I change where Steam installs to?

15
Why can't I install TF2 in a non-default game library location?
3
Steam won't allow Black Ops 2 to be downloaded/installed to a separate drive
0
symlink to move steam games to cold storage?
1
Will Steam only install games (and DRM) after I first run them?
4
Can you bypass the space requirement when manually restoring backup of Steam game?
2
How to install Steam games on external HDD without having to rerecognise files?
3
Steam “not enough free disk space” error when attempting to move game folder
5
Steam Categories under “My Games”