Is it possible to escape a fight without fuel?

I am stuck in a never-ending fight in FTL. Is it possible to escape the fight?

I have no fuel, and no missiles left. My shield and my engine are top notch. The enemy shield has 3 slots. My best beam cannot pierce through shields with 2 slots or more. My best laser shoots 2 bullets at a time. The enemy rooms have no oxygen, so any teleportation for a sabotage would lead to the death of my crew. 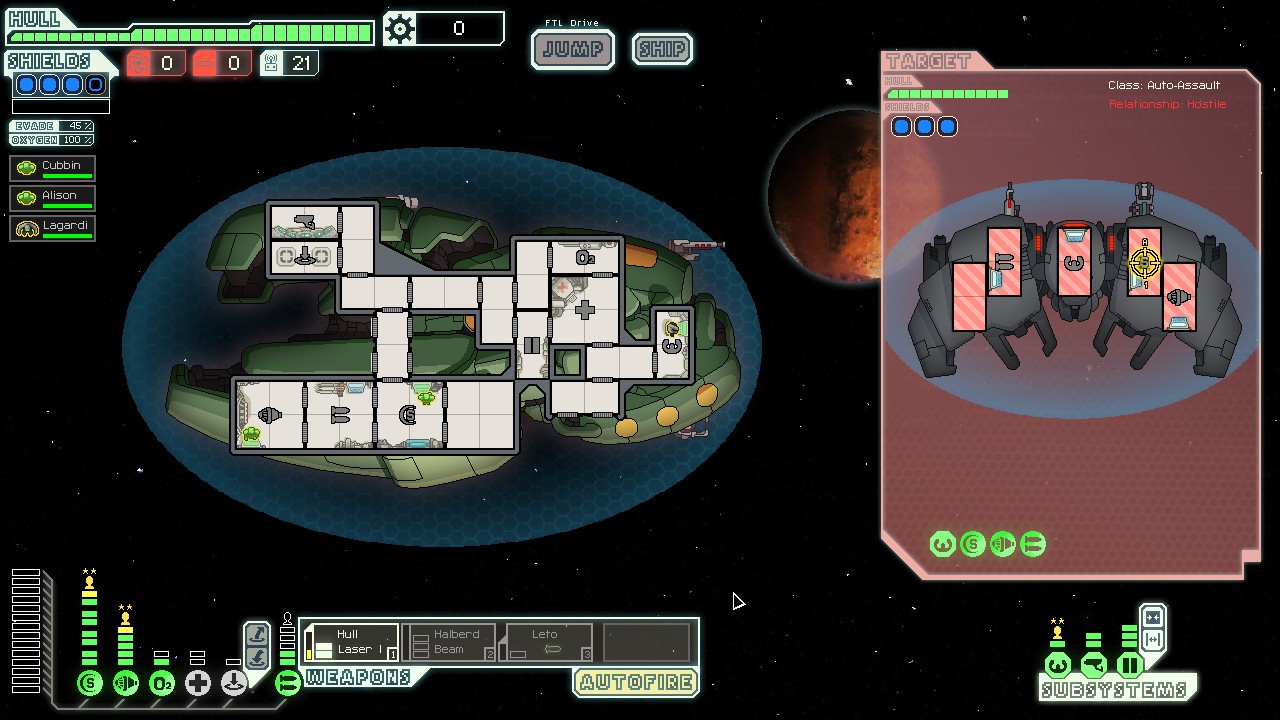 Normally you wouldn't be able to escape a situation like this, but your halberd beam should be able to do 1 point of damage per room through a 1 bubble shield, which is what the enemy will have immediately after your hull laser hits. You can destroy the enemy and be on your merry way.

While kotezot's answer is the best course of action, there is an ugly alternative.

Sacrifice a crew member. Teleport them over to start destroying the shield generator. Then do everything you can with your other weapons to bring it and keep it offline. Crystals, Mantes and Rockmen are best suited for this task with their improved attacks or protection. Humans and Slugs can do some damage, but won't live to return. A single Zoltan or Engi won't do enough damage before suffocating.

Unfortunately, you'd have to expend two crew members to pull this off, leaving you in a dire situation.

This reminds me of an episode of Start Trek: TNG, Thine Own Self.

Geordi La Forge and Worf are the senior officers in the simulation, where the insulation of the antimatter chambers is breaking down. Troi has to make fast decisions, but fails. Riker tells her that all parts of the test went well for her, except for that last and most important part of it, resulting in Troi failing the whole test.

After having entered the holodeck, Troi starts the test's simulation again. She is in engineering, and the antimatter is about to leak out of its container. She asks La Forge if he can repair the damaged parts. The Worf hologram says that La Forge never will survive the operation, but Troi, well aware of this, orders the holographic La Forge to repair the damage anyway. As an anguished Troi watches him enter the turbolift, Riker, having known she would not give up so easily, enters and congratulates her on passing the test. She immediately deduces that the point of the test was to see if she could order someone to their death, which Riker confirms. Having known this was part of being in command, but having still hesitated when the time came, Troi admits that he may have been right about her being ill-suited for the job - to which Riker counters that she passed with flying colors; she had tried every possible solution she could think of, and when nothing else worked, she made the painful but necessary decision required to save the ship.

27
Tips for killing enemy crew without use of boarding parties
21
How quickly do crew suffocate without oxygen?
17
Is it possible to re-name crew-members in-game?
15
How to destroy AI ships without weapons?
10
Is it possible to obtain more Lanius crew?
7
Why would you ever attempt to outrun a ship before or during a fight? (should you always take a blue option)
18
How many ions a day keep the rebels away?
2
Out of fuel, no missiles and encountered, what can I do?
3
Cloak the power surge or the missiles in the Rebel Flagship fight?