How can I stop blockading their system?

Or maybe a better question would be why can't I stop? I was invading Jovanus when they offered me a cease-fire. I am at war with 3-4 others, so being able to bring my forces to bear on other fronts seemed good. Yet my fleet won't move. I've given it orders several turns now and no dice. I'd think during a cease fire you'd want your enemy to move their forces away... 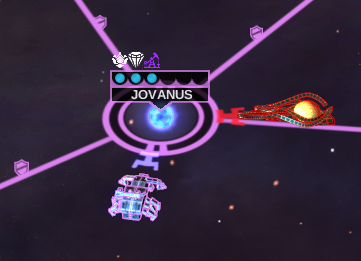 Noticing the icons on the strings in your screenshot, it looks like your opponent's fleet is blocking enemy movement. So the only way to get away is if your opponent either moves that fleet away, stops blocking or you sign a peace treaty with them.

Here's a relevant situation I often run into, with a similar lack of feedback.

Scenario: As you probably know, systems that have been promoted to full Colony have this aura in your faction color called Influence. Influence defines the borders of your empire. In certain diplomatic scenarios (namely, having a Ceasefire but without Open Borders, such as you probably are now), those borders are impassable. I suspect that's the situation, because there aren't any other colors on the Strings leading to this planet. If you try and order a fleet to make a move that would require you to String Travel across those borders, your fleet will simply not respond, with almost no feedback. Hmmph.

Solutions: If this is where you are now, there are four ways to get your fleet back: three diplomatic and one research. The first diplomatic solution is to wait out the "cooldown" period after accepting the ceasefire and making a deal that involves Open Borders, which will allow you to move through their empire (and they through yours). The second diplomatic solution is less likely, but it's possible that you could bargain for them to give you planets to make a corridor to free your fleet. In case you hadn't seen it, planets are considered valid bargaining chips in diplomatic deals. The last diplomatic option is one you probably don't want, but if Pink is a PC instead of an AI you could coordinate to Declare War, retrieve your fleet, and then declare a new Ceasefire. Finally, the research solution is to research your faction's String-less Travel research (usually tier 3-5 in the Colonization tree).

I don't know the details of your situation, so I can't tell you which solution is best for you, but those are all the ways I can think of.

Not the answer you're looking for? Browse other questions tagged endless-space or ask your own question.

4
Which Hero Types can learn which abilities?
4
Why can non-treaty players fly through my space?
17
How is Academy Size increased?
3
How do I clone Galdos?
5
Is Adaptive Taxation worthless in a system that only has asteroids?
13
How can I colonize a system with no food production?
4
Does everyone choose their reactions to Galactic Events in Endless Space?
1
How can I automatically redirect created ships?
1
How can I move population to other colonised systems?