How can I bring zombies down to one-punch kills in Minecraft?

There's something about zombies in Minecraft that if you merely drop them down 23 blocks for the fall damage, they take two punches to kill, rather than one punch like other mobs. (23 ½ is the same, and 24 blocks will simply kill them.) I’ve heard that this is due to zombies having “armor” (not visible armor, evidently) that has to be broken first (or perhaps it has something to do with the effects of rounding on armor damage reduction).

How can I automatically soften up the zombies a little bit more so that they only take one punch to kill, preferably in a way which ends in a drop of at least 11 blocks?

The mechanism must be fully automatic and accept zombies arriving through a water stream. It's OK if the occasional real-visible-armor-carrying zombie still takes extra hits.

Fall damage and suffocation damage seem not to be able to “remove the armor”: I have not found any combination of two falling stages, or 1 tick of suffocation followed by falling, which will result in a one-punch kill. (If you have found such a combination then I'd love to see an answer with a complete design to demonstrate it!)

There is the possibility of dropping mobs through lava, then water, which seems like it should work, but has the disadvantage that in order to prevent the mobs from swimming up in the liquids (thus dying to lava, or getting stuck in water), a simple tube would have to have, in order: a long drop, a lava block, (another long drop? not sure), a water block, and finally another long drop to the collection pad. This extreme height would make my underground zombie trap's plumbing poke up into my above-ground buildings.

I have invented a solution to this problem using a mechanism to apply one tick of lava damage. It occurred to me that a tripwire could be placed immediately above lava in order to remove it (using a dispenser) as soon as a mob hits it, thus preventing the mob from continuing to swim in it. Doing this for the water as well as the lava means that no acceleration is needed to make sure the mob will fall down, so the whole mechanism is only a little bit of extra height above a standard fall-damage trap. 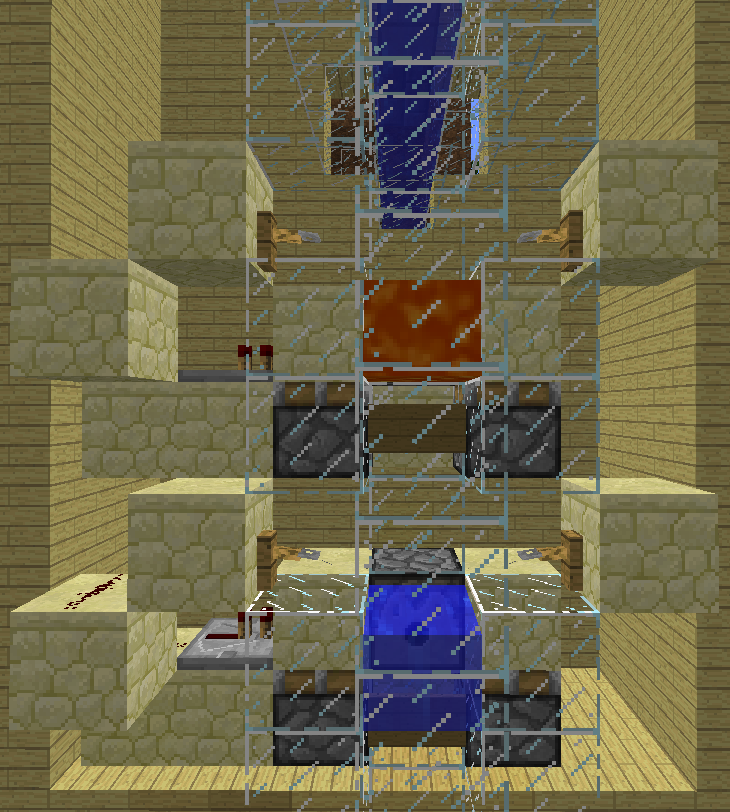 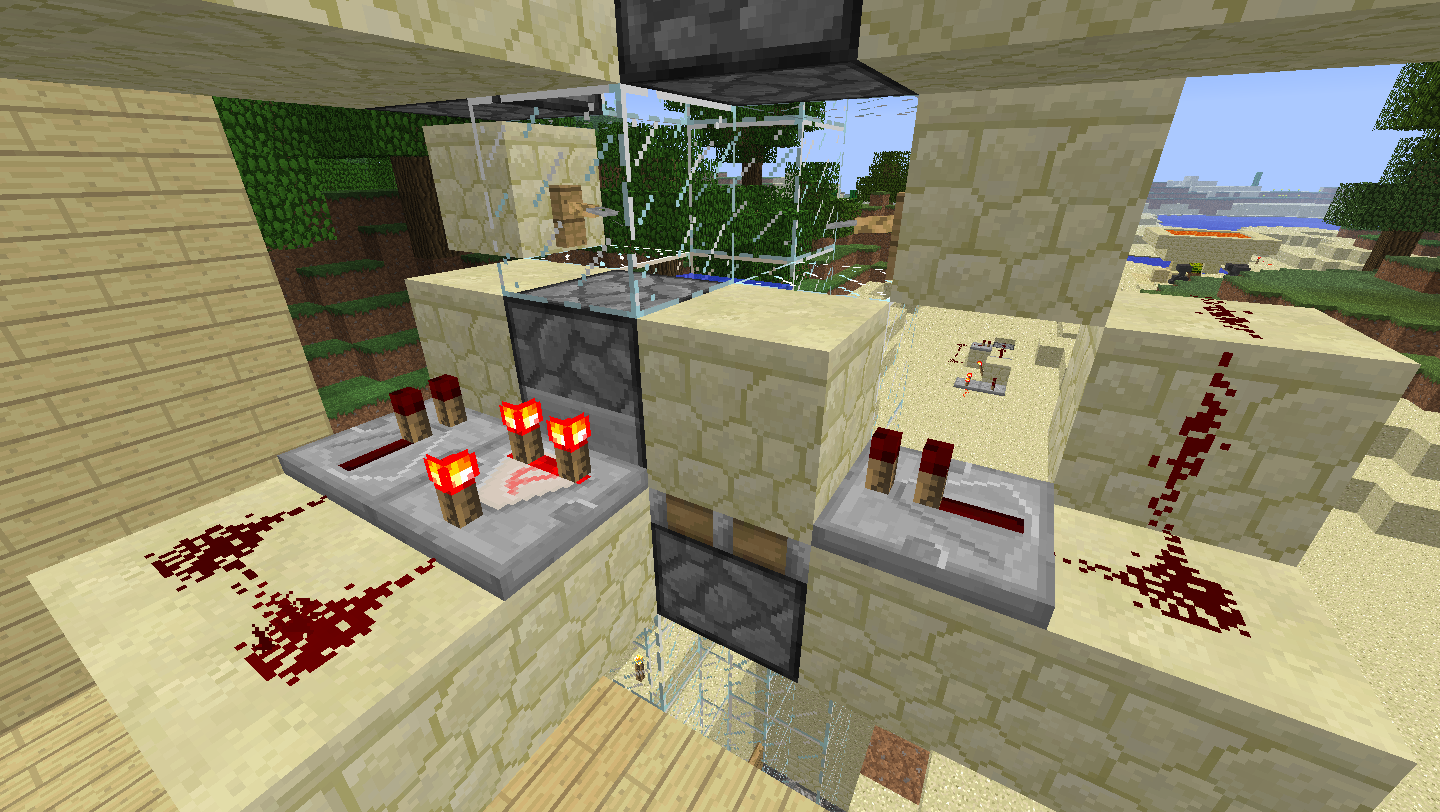 Build details, from top to bottom:

Results: When the zombies hit the platform, a few still take 2 punches, but most of them take 1 punch to kill. I have successfully operated this mechanism in my survival world fed by two zombie spawners.

I know it can be hard to build mechanisms from screenshots, so if you would like any further explanation of other camera angles, feel free to ask me to add them.

From what I gathered from reading a couple of forum posts/threads, 23 ½ is your best bet. Some of the zombies will die from the fall damage but the majority should end up being a one hit kill.

Hope this helped you, good luck!

Mechanism above is good to expose 1 tick of lava damage, however you ALSO need precision for the falling zombies. That device can have multiple zombies falling together each with "overlapping" parts of their bodies say the feet of 2nd zombie overlapping with head of first zombie, so ONLY the first zombie takes the lava damage.

So you need to make sure ALL zombies fall either totally separately (very hard) or as a single group that are all EXACTLY at the same Y elevation.

So INSTEAD use a long-delay clock to send a "start" signal at regular intervals.

Right under the spawning rooms, some (to be found) height above the water+lava device, you have a "trap room". Zombies fall from above from a hole in roof, onto the floor, and mass up there.

All signals go from the precise "start" signal, which repeats say every 10 seconds (or whatever).

Start signal activates a piston to close the traproom roof leaving exactly a 1x1x2 high room for the zombies. Thus, no more zombies arrive (for this "wave").

Small Delay. This makes sure all zombies in room are all on trap room floor, at EXACTLY the same height. well, some might be trying to "jump around" so this ain't 100% perfect. But at least the height difference of overlapping zombies is kept limited to a minimum (aboie distance between a zombie head and roof, only a few texture pixels, compared to before where a "train" of falling but overlapping zombies had no theoretical limit on it's total height length).

Then some falling distance = that yields a SPECIFIC falling time.

Then some other delay = activates the water+lava damaging device. NO STRING WIRE necessary, the delay can be directly from the start signal not from the falling zombies. That is in fact better because... zombies jump around, right ? A precise clock is thus better. More precise and thus more controlled device.

That way, ALL zombies will take the same exact same amount of lava damage. Well, theoretically possible that the SMALL vertical distance between zombies that were flat on the trapdoor floor vs zombies that were jumping right when the trapdoor opened, is sufficient to allow a zombie avoiding the 1 lava damage (I seriously doubt it), but that should either be a VERY rare occurence, or else just try another falling height / redstone delay combination. Or just try exposing the zombies to MORE than 1 tick of lava. After all, the zombies have a "cooldown" time between damage, so making tem exposed for more thna 1 tick but way less than the cooldown time, will allow even the "slightly latecomer" falling zombies (beause they jumped right when the trapdoor opened) to "catch up" to the others and thus ALSO take the 1 point of lava damage, while the "falling normally" zombies will still be in damage immunity cooldown.

Then some falling distance for enough falling damage so that 1 punch kills are always the case (well, zombies without actual armor equipped, that is).

You can keep the zombie suffocating for exactly 8 seconds and it will be a one punch kill (Minecraft 1.7.8).

10
How can you cook a cow with a dispenser and lava?

44
How do I make an effective Minecraft SMP trap?
12
What constitutes a fatal fall into one block deep water?
5
Can I break the fall of an Enderman with water?
4
XP Grinder Optimization
4
Can baby zombies break down a door if only one block is placed in front?
5
Why is my mob farm not allowing me to grab XP orbs in Minecraft? How can I fix it?
3
How do protective enchantments work on equippable non-armor items (elytra, mob/player heads)?
3
What is the hardest to kill zombie that can spawn naturally?
2
Detect if SelectedItem is part of a #tag