Is it possible to run RollerCoaster Tycoon 2 in windowed mode?

Is it possible to run RollerCoaster Tycoon 2 in windowed mode?

I have Windows 7 and the game works, but since my resolution is bigger than the game can handle, I would prefer to play in windowed mode instead of having the game scale.

So is it possible? And how can I activate it?

No, it's not possible at all to run RollerCoaster Tycoon 2 in windowed mode. The only thing I could think of, while drastic, is running the game in a virtual machine like VirtualBox or just Windows 7's XP mode and thereby 'faking' windowed mode. I'm not sure what that'll do to performance though.

Yes, it is possible.

Get rct2-ddhack2.zip and the Visual C++ 2010 Redistributable Package (x86). I see mirrors on Google if the GitHub link ever gets taken down.

Extract rct2-ddhack2.zip to your install directory. The default for GOG is:

When starting the game or changing the resolution in game, after a couple seconds the screen moves to the upper right corner on its own. This only seems to happen that one time though.

Additionally, I find that I have to press the taskbar button for the RCT2 window twice to minimize then re-maximize the window. Otherwise, the graphics are cut off.

When you change your resolution while using this hack, the on-screen graphics don't match with what the game thinks you're pressing. Everything is shifted down. Don't worry.

To change the resolution, start any scenario or load any saved game. If it hasn't already, wait until the RCT2 window moves automatically to the upper edge of your screen before doing anything else.

There is a floppy disk icon in the top-left that has an "options" menu item. Select it. From there you can change the resolution. Once you do, the graphics will be shifted and you won't be able to see any of the menu icons along the top of the window. Ignore this and don't press anything. Just wait. Once again, the RCT2 window should move automatically to the upper edge of your screen. When it does, press the [X] button at the top-right of the window to close the game.

If the game closes, you're done. Open RCT2 again and you'll see your new resolution has been saved.

If you waited too long (at least a minute if not more) since you opened the level, the game will helpfully ask if you want to save your progress. Since the graphics are still messed up, it's tough to click on "Don't Save". Simply open the Task Manager (ctrl-shift-esc) and "end" RCT2.exe. When the game starts again it will have your new resolution saved.

A developer named ToadKing made a DLL that intercepts RCT2's DirectDraw calls and puts them into a window.

As user56 notes, you can play the game within a virtual machine like VirtualBox. If you don't have a spare Windows license and love doing extra work instead of using ddhack, you could try installing a version of Linux like Ubuntu and also installing WINE. Then you would load RCT2 from WINE within Ubuntu in a VirtualBox window on Windows.

I found this hack in a forum thread that lets you run RollerCoaster Tycoon 2 in Windowed Mode; maybe it will help.

I get that OPs question is for win7, but I've found it trying to get the hack working with WINE. It hasn't worked for me out of the box, so here's my solution.

On Linux or OSX you don't have to use any hack. Wine has an useful feature called virtual desktops. Just run the game like this: 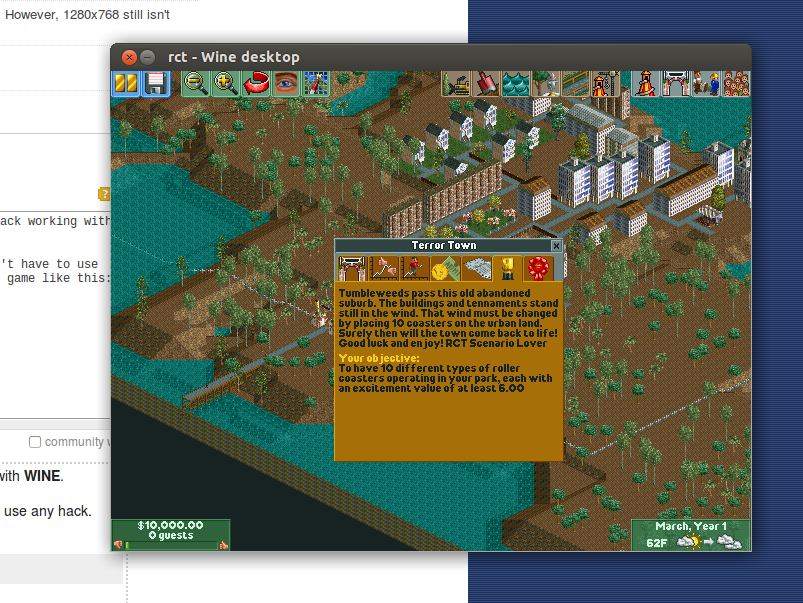 Works great and you don't run into problems when changing resolutions, don't have to offset your mouse position or do any of those hackish things.

Windowed mode is not possible with RollerCoaster Tycoon, however you can increase the resolution higher than the game allows in the options with some hacking.

While the original RollerCoaster Tycoon 2 does not support windowed mode, you can install the open-source recreation OpenRCT2, which adds support for windowed mode, multiple resolutions, and scaling options. 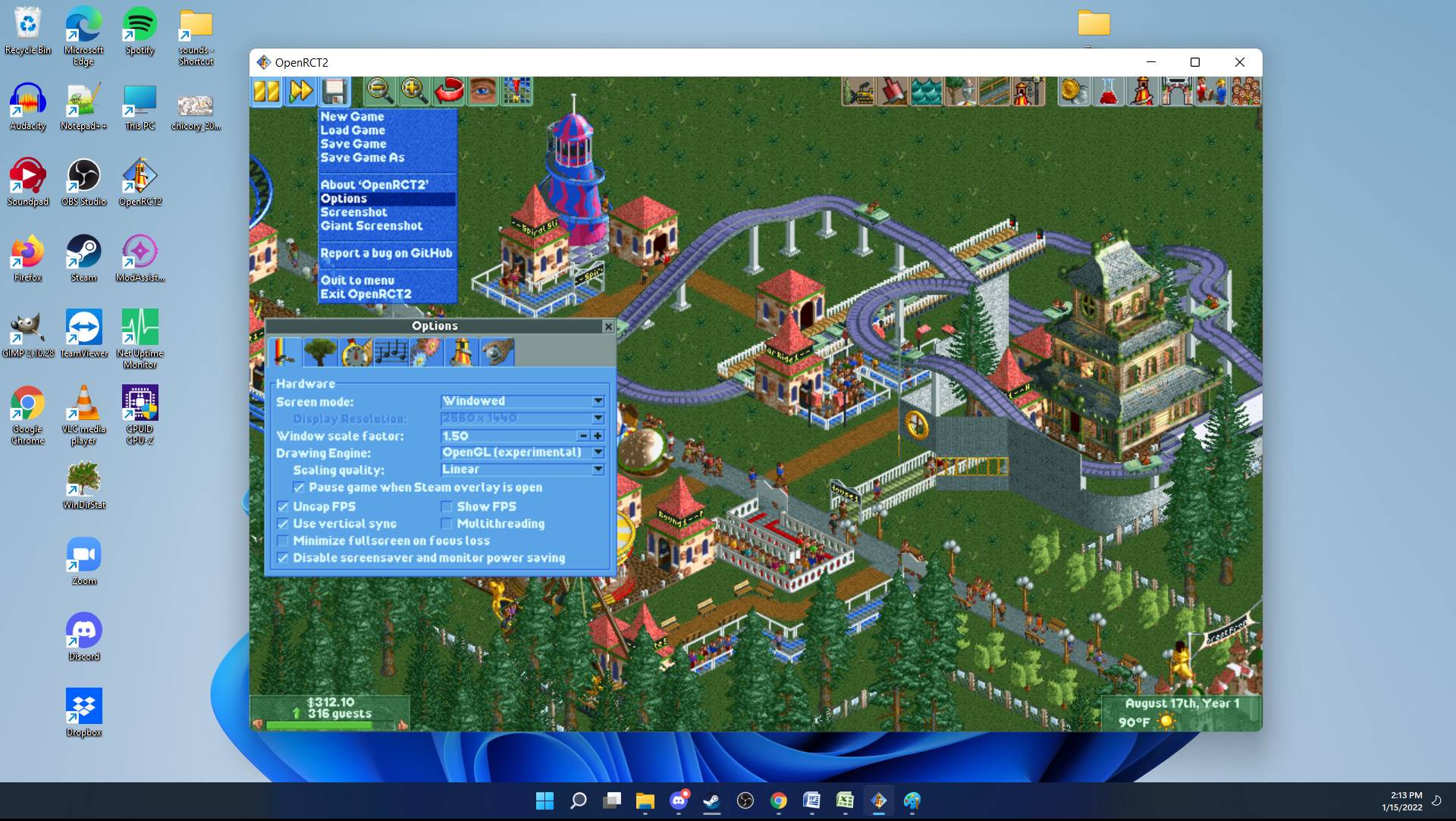 Not the answer you're looking for? Browse other questions tagged rollercoaster-tycoon-2 .

4
How can I run Plant vs Zombies in a resizable window mode?

9
Is it dangerous to run tall rides in a thunderstorm?
5
How can I beat Rainbow Summit?
2
How to run Roller Coaster Tycoon 2 in a window with PlayOnLinux and Wine?