Do you avoid the damage if you kill a turret right before its missile hits you?

This has happened to me various times but its kinda fuzzy as I can't find anything official on it.

Lets say you tank a turret with a teammate so you think you're gonna kill the turret in time before you die but then you realize you won't make it in time so you decide to run away or even flash out if the timing of the game is crucial and you really don't want to die. You are only one hit and right before you flash the turret fires a missile which of course follows you to wherever you flashed. But before the missile lands on you and kills you, your teammate manages to kill the turret and when the missile hits you it makes no damage.

Now the same of course has happened to me with champion skills. For example I've killed a leblanc but she had already thrown her Q on me and it killed me even though it landed after she died. Or a nunu snowball or any other locked spell with a short delay.

I'm pretty certain you can't get damage from turrets if they get destroyed in the meantime but as I said I can't find anything official. Can someone confirm this or point to a link stating it? I've always wondered :)

Here is the wiki about turrets where nothing related is mentioned.

EDIT: I'll use a picture to make it even more clear. If the turret in the picture was destroyed at that exact moment blitzcrank would take no damage from the purple missile heading towards him :) 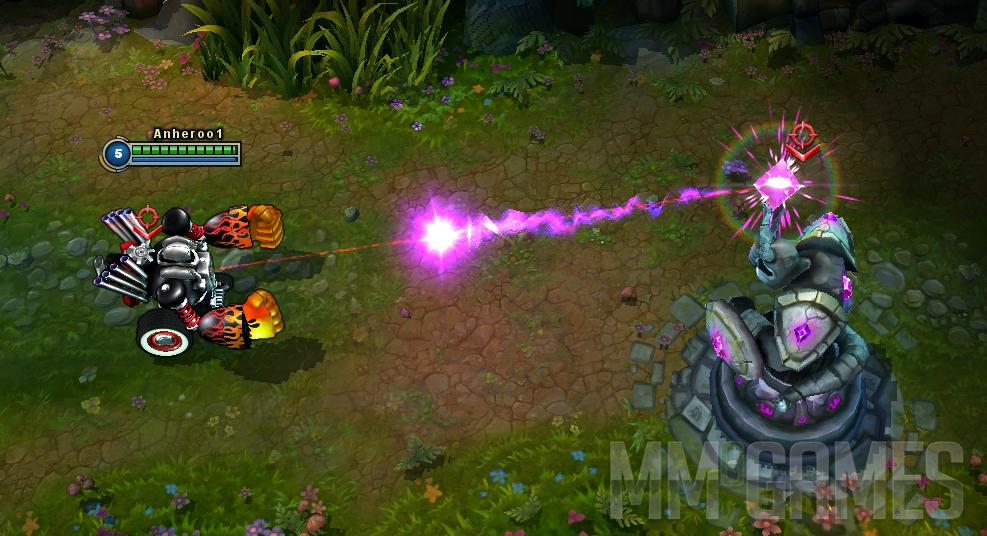 No, If the missle has been shot, you will take the damage no matter if the turret is there or not.

A shot that acts like a guided missle can not be avoided. Only shots that are not guided can be avoided by stepping or flashing aside.

The turret has a Guided missile system. So that means it will hit you and damage you no matter what you do.

It shouldn't be too easy after all.

A turret is there to give protection. Not to be dodged by every attacker.

The only way to avoid taking damage would be to become invincible right before the attack hit. Otherwise you will be hit and take damage

4
Can you make a turret change targets?

3
New Twisted Treeline Base Walls - Skills or Spells that jump over them
2
How would you maximize Kassadin's laning phase before he hits level 6
4
Can you "sequence break" turrets?
7
Can I hit with Ahri's Q more than twice?
7
League of Legends damage modifiers while channeling
6
Who gets the kill when the turret 'last hits' the champion slain?
8
Does buffing grant you Turret assists?
2
Dealing with very fast (moving) fighters
1
Sejuani vs Leona Support
2
How does flash work?