What does the “Portal funnel” option do?

The computer helps you aim into floor portals.

I don't understand what this is supposed to mean. Does "aim" refer to the portal gun crosshair? No, turning it off doesn't disable the crosshair. Why would I "aim into floor portals"? I can't shoot a portal into an area if it's already occupied by the other portal.

As I toggle it on and off while playing through the game, I don't notice anything different, so what really is this meant to do?

It should be noted that this option is completely absent in Portal 2. I'm assuming it's enabled by default somehow, since it's also on by default in the first Portal and they pretty much use the same portaling engine (and the same portal gun).

When you perform a fling, or when you're falling from the ceiling to the floor repeatedly to get the Terminal Velocity achievement, do you notice yourself being pulled toward the center of the portal you're falling into?

That's funneling: the phenomenon of being drawn toward a portal even though you may be a slight distance away from its center, such that you would have landed on the floor instead of passing through it had you fallen straight down. It's akin to filling a bottle by pouring the liquid through a funnel to ensure that it doesn't spill out of its narrow bottleneck: 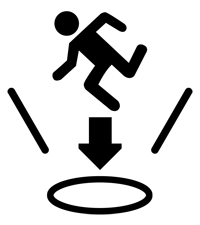 Funneling is most useful during high-speed maneuvers such as flings where you don't have a lot of air-time to aim yourself directly at the portal into which you're hurtling. (Suddenly the description given by the Options dialog makes much more sense.) If you disable this option, you're more likely to land on the ground rather than make it through a floor portal if you're off-center, forcing you to have to attempt the fling again.

This option corresponds to the sv_player_funnel_into_portals variable in the console (which, by the way, has a much better description IMO):

It also exists in Portal 2, enabled by default as with the first Portal, but isn't accessible in the Options menu so you have to set it using the console. As with most other Boolean settings, 1 is enabled and 0 is disabled.

I'm just going to leave it enabled in both games, even though I'm apparently good enough with portal flinging to not notice anything different in normal gameplay.

Best example of how this option works is the end of chamber 18, if you use this option you can make all of those platform jumps in 1 sequence with out problems, but if you have it turned off it's very hard to do so. It also lets you save 1 step on portal step challenges if you go through floor-floor portals, too bad I discovered this option after beating everything.

In addition to BoltClock's answer, it may have something to do with guiding your portals. I have noticed that - at least in the console version - it is a lot easier to position the portal directly in the center of the floor tile. I've seen portals do this despite me completely being off target. This might be what it means when it says "... helps the player aim at floor tiles."

Not the answer you're looking for? Browse other questions tagged portal or ask your own question.

21
What is that ASCII Art From the Portal Credits
9
What is the meaning of the end scene in Portal?
3
Portal: The First Slice Demo Glitch
5
Disabling the Radio in Portal
1
What does Portal have that Portal 2 doesn't?
16
What is this graffiti on the walls in Portal 1?
8
What makes surfaces portal-able?
22
The soul orbs in Portal
2
What is the audio file in Portal that plays when a radio is destroyed?