What skills or support gems work with Lightning Strike?

It's my understanding that the projectiles from Lightning Strike work with support gems like Lesser/Greater Multiple Projectiles and Chain or Fork, but what about the Iron Grip passive and other projectile speed and damage passives?

The first line in the description fo every gem contains some tags, i.e 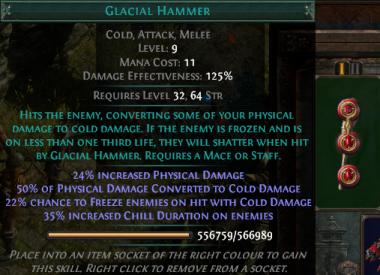 In this example Glacial Hammer is Cold, Attack and Melee. That means that any support gems with any of those same tags will add its effect to it.

Iron grip works with any physical damage done by projectile attacks. So yes it will passively increase the damage done by Lightning Strike + whatever support gem you are using, however it will only increase the physical damage done. Damage passives would also apply to which ever type of damage they specify, whether it be physical or elemental(i.e. - passive lightning damage increased by 30%, so if you had a lightning strike that did 35-50 lightning damage, it would now do 41.33-66.33 lightning damage with the passive bonus). As for projectile speed, I do not remember there being anything in the game that increases a projectiles speed, there are however passive skills that increase a players attack speed. As far as attack speed goes, I have yet to experience a change in the time it takes to fire a regular shot compared to firing a skill. Increasing your attack speed will make you attack more often but the rate at which the speed increases should stay the same for both basic and skill attacks.

1
Which support gems affect the Arc skill?
5
Can you gimp your character by insufficiently planning your passives?
4
Do support gems link all, or just nearby gems?
1
Do you have enough Gem-Slots to support 3 offensive Spells?
0
Does Iron Will change the listed damage?
1
What spells are good to link to cast on damage taken and melee kill
2
Support gems for auto-defense skills
3
How do I sustain Frenzy Charges for Flicker Strike?
2
Discipline of the Slaughter interaction with Flicker Strike