How to cope with choking when playing games?

It happens to me all the time, especially on rhythm games, but also on other action and fighting games where flawless performance is crucial.

I've practiced a very tough level several dozen times, and I'm getting really close to finish it flawlessly (like full combo, or something like that). And then when I start my perfect run push, as I get closer to finishing the level, at the very end I choke and I end up doing some stupid mistake I wouldn't do otherwise. I can't say how many times I've seen a result screen like this: 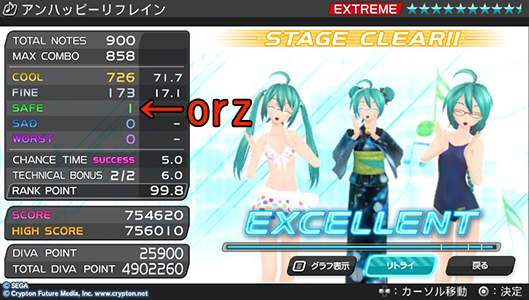 On the other hand, if I make a mistake early on the level, I know I'm not going to finish it perfectly, so I can flawlessly clear the later part of the level.

I think it has something to do with unconscious movement. If I'm doing the level unconsciously, probably even thinking about something else, I do it pretty well; but when my brain senses I'm close to finally doing a perfect run, I get nervous, and my consciousness, who sucks at playing games, takes over and I end up making really stupid mistakes.

In the end, when I actually flawlessly finish the level, it is more because I managed to somewhat finish the game consciously, rather than because I actually practiced. With levels with really tough endings, I can do more than a few hundred runs and never actually get to finish them, just because I get nervous at the very end.

How can I stop choking when playing games?

You are experiencing choking — you are playing the game relying on subconscious timing and movements, which totally break down once you become sufficiently self-aware that, god damn it, you've tried this segment thirty times already and finally I made it oh god oh god no dammit let's try again uh let's try again better wtf why can't I even make the first jump now!

As the article explains, there are really two types of learning: implicit ("muscle memory") and explicit ("study"). These processes are different, rely on different portions of the brain and are independent of each other. Stress can, however, inhibit the basal ganglia - the brain part responsible for implicit learning and short term memory. When that happens, you've choked. It's not a matter of being good or bad, expert or newbie — actually, it only happens to those sufficiently experienced.

I would suggest doing a context switch whenever you feel like this, if possible. Go have a snack, drink something, call a timeout, watch a video on youtube then come back to the task. This should help resetting your mind, relaxing a bit and losing a little bit of the excess self-awareness that is the issue to begin with.

You may not be open to it, but I have a suggestion for learning not to do this.

Whenever you're doing well and start to get excited/panicky/nervous and you're thinking about that perfect score rather than just playing with your normal focus, quit right then and there. Cut it off as quickly as possible. This should help avoid any sort of adrenaline dependence as well as prevent you from "practising wrong". For any sort of practice you want to maximize time spent practising correctly and minimize time spent practising incorrectly to better train your brain and muscles.

I'm new here. I, too, have experienced "choking" like you describe, plenty of times. Indeed, specifically when I start consciously thinking I'm on some kind of high to unprecedented score run (especially a "full combo" in Guitar Hero and Dance Dance Revolution), this is when that very fact tends to get to me and get in the way of me completing, in particular, a "flawless" run in any way. Over the years, I have learned to manage my temper better when this happens (so I don't throw video game controllers and whatnot at whatever that could cause damage), but I still have a tendency to "choke" in this way when this kind of score is on the line with little or no room for error.

One thing that I've found really helps is not to berate myself if I screw up. I think a primary symptom of this "choking" is that we get very angry at our screw-ups, and this makes it much easier for them to be seared into our memory when they happen, to come to mind whenever the relevant parts come up again. As such, I figure these kind of "chokes" will happen sometimes. Furthermore, in recent years I have moved away from "grinding" and restarting over and over again just for a particular score (whether personal record, "barely adequate" or anywhere in between.) In the past few years I have thought it more fun to play "live" where I specifically DON'T get to restart if I make a mistake - I simply have to salvage whatever I can get from there - it gets away from the "grinding" and repetition, and once I got over the periodic "bad" scores from this, the "good" ones ended up much more meaningful to me since they were all effectively "first try!"

I will say that alcohol helps me not think about such "meta-gaming" during the game itself in general. However, there is a careful balance to strike between such "calm" induced from alcohol, and drinking so much that you just aren't coordinated enough anymore. If nothing else, if you've been drinking, you can blame your screw-ups on the alcohol if you have any doubt you've had at all too much lol. Likewise, especially to, in a way, advocate for its worldwide legalization, cannabis can help a lot for many gamers without nearly the perception and dexterity impairment normally associated with alcohol!

Above all, I definitely relate to everything you are getting at, and seek to overcome this problem, for myself and others, as best I can.

I used to choke on games. I don't play rhythm games because I suck at them, but the way I found to stop choking on the types of games I do play is music.

I'd play a loud heavy track, something I'm familiar with, and then try and "zone out" of the game. I'll be playing but almost paying no attention to what I'm actually doing. I'm almost watching my own body play the game without me actively taking part in what I'm doing.

It's especially awesome in FPS's when I end up taking shots and hitting people I didn't even consciously notice, but my subconscious which is controlling the game for me has already killed them. I think I ended up gaming like this by having to play and work at the same time for a year or so in a lan gaming centre. It took awhile before this "happened". May not be worth trying if you enjoy being deeply ingrained into your games.

This answer works for all contexts (even outside gaming):

Choking happens when you get nervous, or overly excited. This is common in the exact situation you described in rythm games, but also in plenty of other contexts. For instances, when playing a game like League of Legends, is common for your clicking ability and attention to detail to be heavily reduced when you decide to commit to a fight. I think rocket jumping offensively as Tristana effectively makes me drunk.

I have found that the solution to this is mostly psychological. It might seem overly simplistic, but you only get nervous because you're heavily emotionally invested in the outcome.

There are two ways to stop being nervous about an outcome. The first is to have complete trust in your thought process. In the LoL example, if you've jumped in enough times in a similar situation, you'll eventually know all the outcomes, and therefore you'll remain as calm as in any other situation. In the case of Rythm games this is the reason why after you 100% a song, repeating the score is almost trivial.

The second, and perhaps more useful is to develop a secondary goal to winning/100%ing a song. In the case of a MOBA it can be CS'ing or buying pinkwards. Or even not dying to ganks in X amount of games. In the case of a Rythm game it could be "have less than X of a type of hit or worse in the next Y rounds."

This has two advantages: The secondary goal is less advertised in game and often requires a spread sheet or a calculator after the game to assess. This means that during the game you won't be thinking about it at all. If you miss a note you're probably still alright.

The second advantage, and in most cases the biggest, is that this secondary goals will be much better for real improvement than the one time goal post of winning a game, getting a lot of kills or 100%ing a song for the first time. If you only miss 20 notes over 20 rounds you're probably a lot better than the guy that misses 50 but gets the song perfect once (unless you're always missing the same note, then you need to get that shit right.)

Of course the hard part in this mental trick is getting yourself to trully value the secondary goal more than the first, obvious goal that you've had for a longer time. Feynman said we're the easiest ones to fool, but not in this context unfortunately. In the context of single player rythm games this might be slightly easier. But when it comes to multiplayer it's hard to overcome the social pressure. After all, everyone else is only worried about winning the game, not whatever secondary goal you set for yourself. Practice is the only solution. If you set secondary goals and go through all the trouble of keeping count, you'll soon find that your brain hates doing chores for no reason, and thus will assume the chore is important.

By the way, this mental trick also works for stage jitters. Simply reframing a talk from a presentation you must nail to some secondary goal like "teaching the audience about something." or "correctly portraying the story of this character" can have a dramatic effect on your nerves.

Not the answer you're looking for? Browse other questions tagged rhythm-game .