The description for the Arcology great work reads as follows:

Building this towering pinnacle of human architecture requires skilled workers and resources. This dense ecosystem contains everything necessary to sustain a massive community. Sims live here but many of them will commute to cities in the region to work, go to school, or shop

Please see the details in the bounty description below for an example scenario.

Having had the Arcology built for the last few days, I've been studying what exactly its doing.

Here's the current stats of my Arcology: 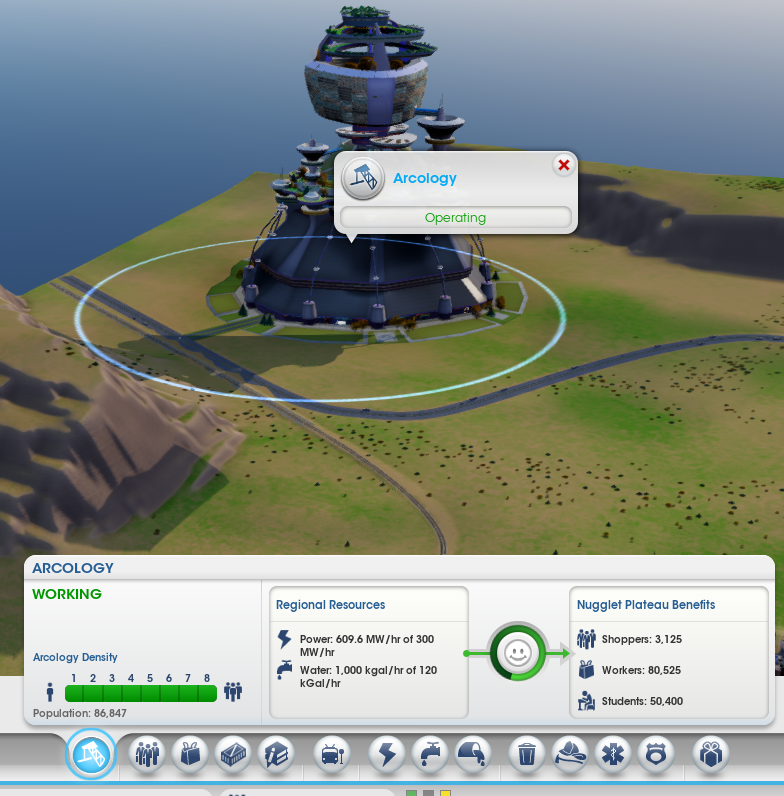 Arcology costs 1,000,000 (just one city pays this fee) and requires 1,000 Alloy, 2,800 Metal, 60,000 TVs (entire region can help with goods) to construct. One thing to remember is each city in the region processes the Arcology separately. I had to load each of my regional cities to get it "built" in each city. To get it operating you need 300 MW/hr power and 120 kGal/hr water available in the region.

While building the Arcology, it doesn't directly update its required goods very consistently. A lot of people on the forums are complaining it's not working, but it worked for me relatively fine (except for a few goods-eating bugs).

Arcology provides 3 direct benefits. Arcology fills the need for residential buildings. With Arcology in place, you could technically create a city without residential zones since all your shoppers, workers commute in. It's an absolute absurd notion, but that's what it claims. 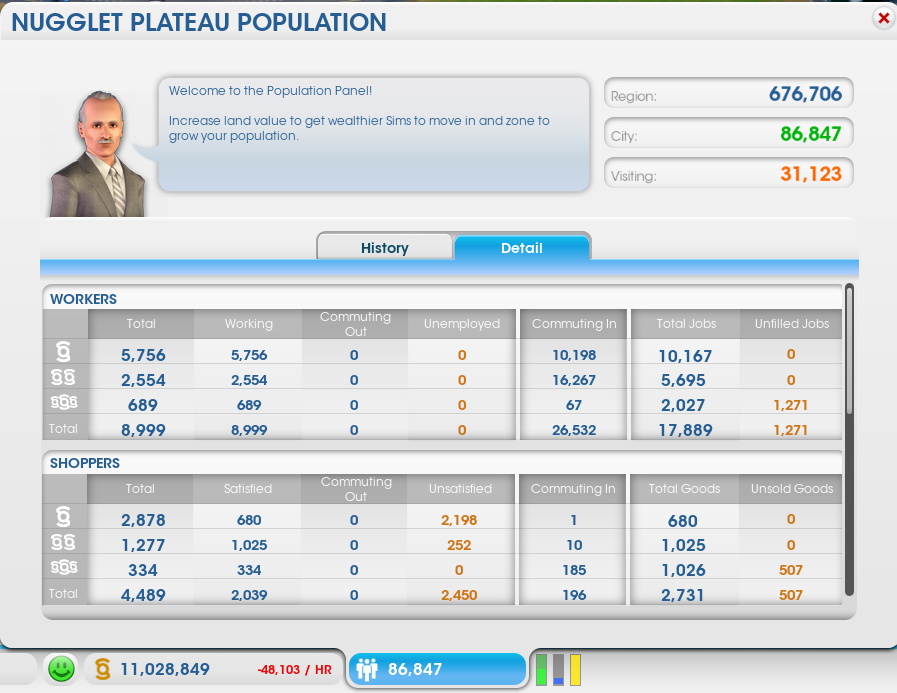 The first benefit is shoppers commuting in to fill gaps in your Commercial demand. At level 8 I have 3,125 Shoppers available at the Arcology. I think these numbers are for the whole region. I don't know what would happen if two people both requested the maximum number of shoppers/workers from the Arcology. I suspect it would grant both cities what they wanted. Anyways, the shoppers commute in and look for shopping. They fill the gap of Commercial needing shoppers if you have one there. You will still have businesses complaining about needing shoppers but they will be eased a bit. ALSO: looking at my numbers it seems Arcology shoppers don't replace your city's shoppers. I think they have some kind of priority over shoppers from Arcology. I think this is true for workers as well.

This is the most important benefit of the Arcology by far since getting that RCI just right is hard. If you look at the above population breakdown you see that I have huge numbers commuting to work. Before I had the Arcology up, I needed $ and $$ workers, but they are filling the gap in my RCI. My needed jobs is staying at 0, while unemployment is staying at 0. Very few $$$ workers are commuting in so I assume most or ALL of the Arcology residents are $ and $$. Just recalling from memory but I think I am receiving 10,000 $ Workers and 10,000 $$ Workers after building the Arcology. 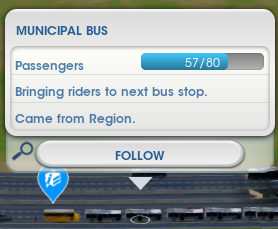 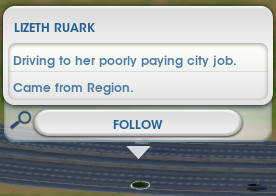 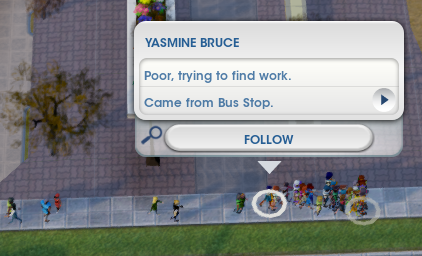 I just watched a morning rush hour and didn't notice any school buses or cars coming in and headed to school. Unless they are all on mass transit and only going to the college/university they aren't coming in. All buses I followed coming in from Arcology seemed to drop off unemployed worker agents, but its possible students were on those buses too. In any case, there's not much need for extra students filling up your schools, so that would be a drawback. I have an extra amount of schools for this city and I haven't noticed any extra filling of my schools. Just taking a look at my community college shows very little regional impact: 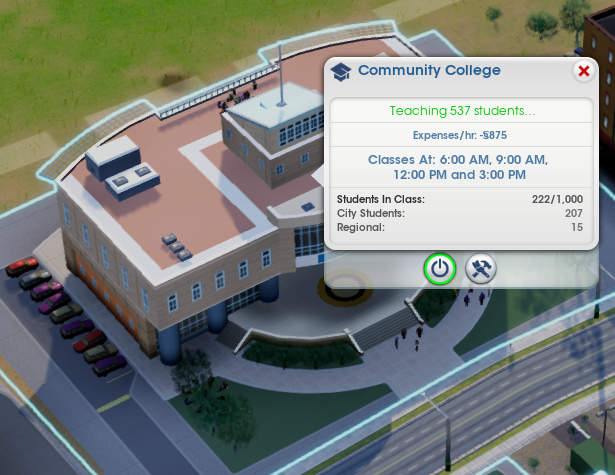 The drawbacks of the Arcology after being built are pretty singular, in my opinion. The only problem Arcology causes is it has the potential to put extra strain on a city in the form of Traffic. 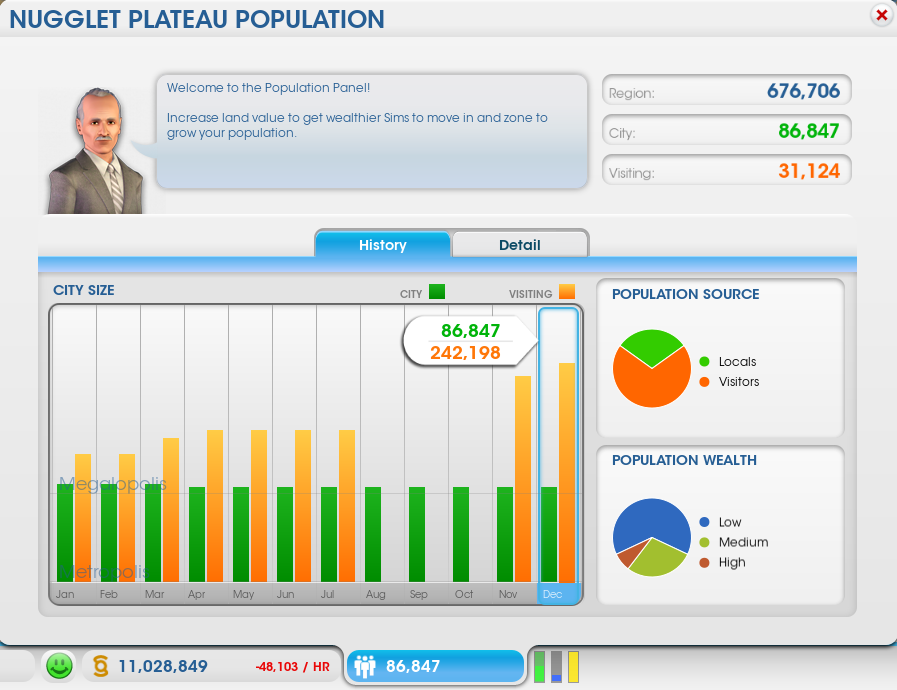 You can see the huge spike in Visitors to my city. That equals traffic. Look at it like this: All those unfilled jobs you had before, all those shops that needed to sell goods got serviced by new people because the Arcology supplied and fixed the gap. IMO, if you have a city that has bad traffic problems Arcology could potentially make it worse. If you have a city that is OK on traffic but needs help in the RCI department (particularly for $/$$$) then Arcology is GOOD. As for your Residental concerns, I don't see ANY impact on the residental in my city, the only thing that is happening is Arcology is flooding my city with Unemployed Workers and Shoppers with money. The students I don't know about so much. In your 2 scenarios the 2nd one is definitely true. Arcology is all about filling the RCI gap (just the CI part) in the form of Shoppers/Workers, not devaluing or replacing your residental need. I can't speak to what would happen if you had very high unemployment and you built the Arcology. And the way the Industry/Commercial need workers at the moment I don't know why you would have Unemployment unless you're trying to game the system with 100% residental city.

Just one last update. It was suggested that you receive tourists from the Arcology. I can't see any proof at all of this. In fact my tourism industry is flailing in the wind and seems unaffected by Arcology being built. I think any shopper from another city is labeled a "tourist", which is true. However, it won't help your Tourism industry, only local commercial. 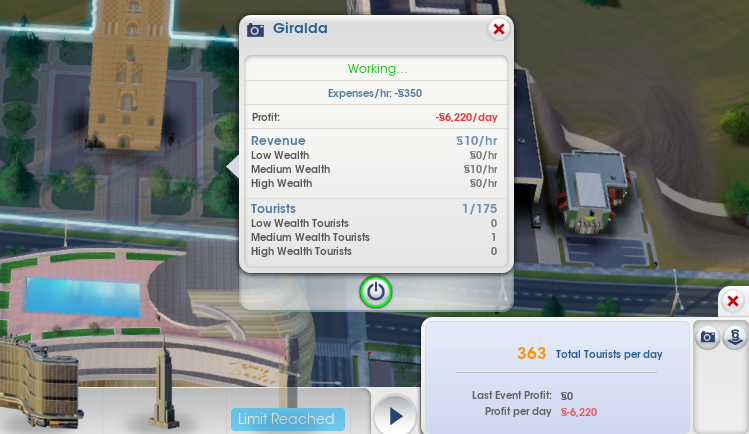 Not sure if you've built it yet, but gonna give my initial thoughts. Having just built the Arcology, I can only tell you a couple of really basic details. However, it doesn't seem as straightforward as simple filling in the gaps in RCI demand. I tried to upload an image but my rep isn't high enough.

The Arcology info screen has a bar that shows Arcology density, ranging from 1 - 8. My current population is also shown, which is around 200k.

Then it shows the current power and water consumption: 300 MW/hr and 120 kGal/hr. And finally, it shows the amount of workers, shoppers, and students supplied by the Arcology, which is only a few thousand.

Since my Arcology has only been active for a few game hours, it hasn't had much time to process. However, it seems to me that the number of workers and shoppers supplied will increase over time, since a few thousand people is a drop in the ocean. It may also be the case that your current residential population needs to be high first in order to fill the Arcology, so it's not a magical people farm.

My RCI still shows residential demand, and commercial is still complaining about lack of workers. I'll get back to you when I spend more time with it.

Click on your population on the bottom of the screen to bring up the population tab. This shows detailed information about how many sims of each wealth class live in your city, commute in, commute out, are unemployed, etc. "Residential demand" is just a summary of unfilled jobs and shops without enough shoppers. As workers/tourists commute into your city from the Arcology, you will get more commuters and so this demand will be alleviated.

Figured a separate answer will help others see this easier.

At the highest Arcology density (Level 8), my Arcology is supplying me with 3k shoppers, 80k workers, and 50k students.

Numbers for shoppers look too small, but I demolished pretty much all of my commercial in all cities to rebuild their road layouts, so that may explain it. Either way, not a massive game-changer, but still a nice bonus to help out with shortages. Certainly not endless as I was led to believe.

I'm playing in a region with some friends and have built the Arcology. The density is currently level 8, and there are 1,093,306 people in there now.

Benefits for my city (so the game says)

Still, my schools are kinda empty, businesses close because they don't have workers, and housing demand is still high for $, $$, and $$$.

So to be honest, I haven't seen any real benefits yet... but I could be overlooking something.

I noticed before I built the Arcology, I used to have 60,000+ tourist. After when my Arcology has been build, the number of tourist started going down to 30,000 after the 3rd day.

5
What does it mean when residential demand is halfway faded?
4
Does one city have to pay for the entire Great Work?
3
Does proximity to a fire station affect building flammability?
8
How does the water sent to the Arcology affect the region?
4
How much does supply and demand affect global market prices?
5
How long does it take for a great works project to start building?
9
Does a great work bring benefits to the entire region or just to the 4 cities which built it?
2
How are great works' perks shared between the various cities in the different regions?
4
Do cities under computer simulation continue building great projects?
1
Powering the Arcology great works