How can I reduce congestion on the highway coming into the city?

I am having issues with large amounts of traffic being backed up coming into my city. I already have 2 Bus Terminals running 13,000-15,000 Sims per day fully capped out on buses with a wait time of about an hour still for them.

I also am utilizing my train stations with about 1,000 Sims using those per day. I also have street cars on all of my avenues which 40,000+ Sims are using those on a day to day basis with an average wait time of 40-45 minutes. 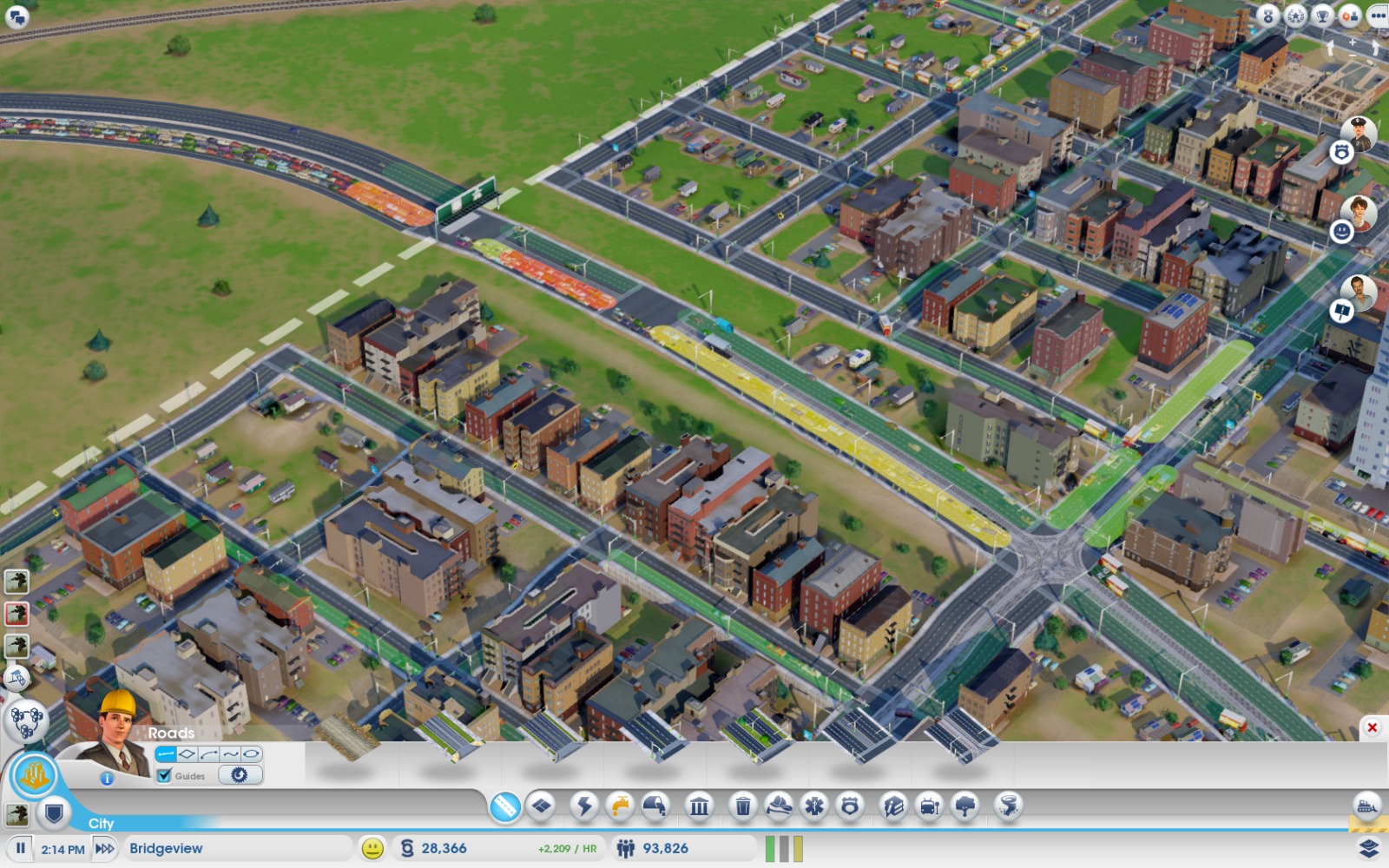 My city only has a population that fluxes between 90-100k at the moment but this incoming traffic problem seems to really hit me hard. Any ideas? Above is my incoming highway.

You have a problem with people turning left at that first intersection. If everyone turns the same way, it effectively turns the road into a single lane road. Address this by making sure that people who turn right and go straight can still reach destinations on the left. Cars do not always take the shortest route, so some will take the alternate routes.

Add destinations that incoming sims will want before the first turning intersection.

I landed in a similar situation in my game today. Here's a shot of the commuters. It's a nice mix of workers and shoppers which have founded a bumper-to-bumper parking lot outside my city. 9pm? That's not a rush hour, it's a way of life. 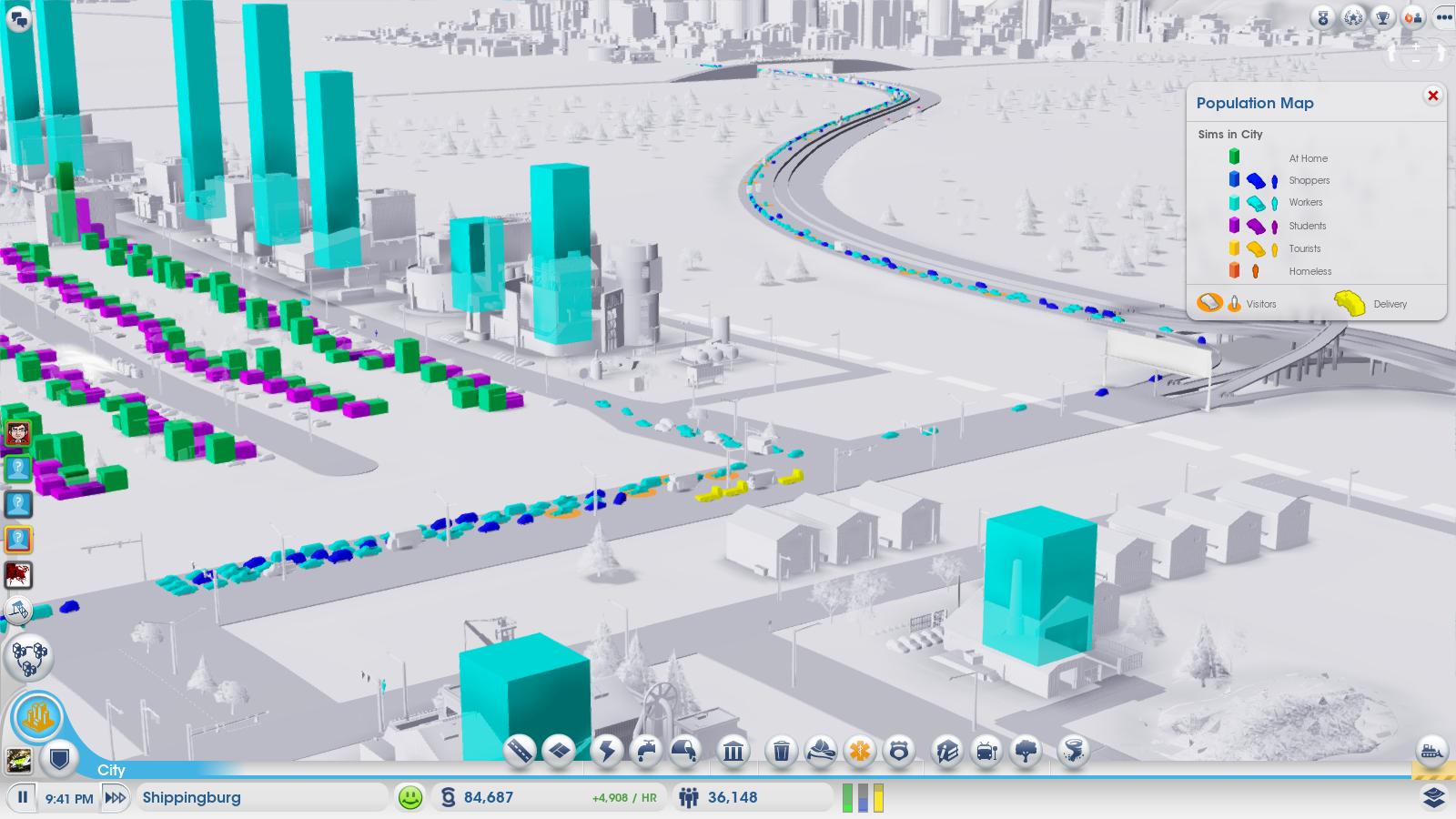 Everyone is turning right at the first intersection. I tried various things to solve it. Reducing the number of commuters. Adding a commuter train. Adding 48 commuter buses (at ~5000 simolean monthly cost). Nothing stuck, so I removed those buses and made the roads "worse". Here's a shot of the solution, along with a nice long column of flowing traffic. It's 8 o'clock and I don't know where the traffic went. 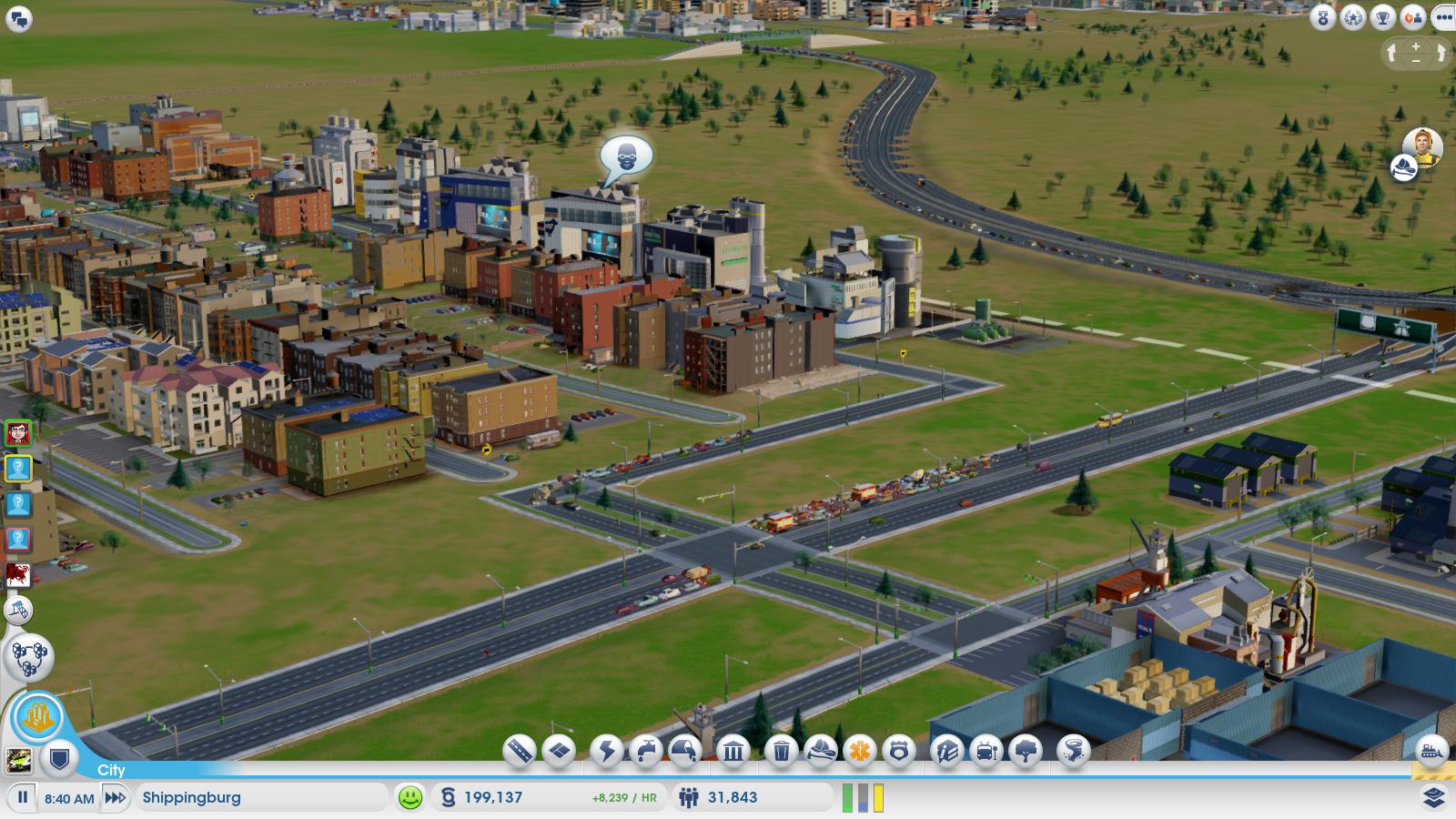 But that's not enough. By itself this would just move the problem to the end of that long street. I moved the right turn forward, and made cars have to drive back to reach places near the entrance. Cars also would enjoy a shorter trip to places in the back of the city if they just would go straight through that first intersection. This had the affect of dividing the traffic. In that first intersection, get 3/4 of the traffic to go straight (using three lanes!) and 1/4 to turn (using one lane).

Breaking the grid this way made the drivers do what I want, even though they could have done it themselves. Now, they have a longer commute, but less time spend parking during it.

In my largest city, at 244,000, the first intersection is about half of the way in and is a three way going to the right. Streetcar Avenues. My next is about three quarters of the way down. Another three way, this time to the left. After that I let high capacity streets cross. I use buses and streetcars. I am careful about placing anything on the Avenues. I use Streetcar Avenues as feeders. Then I use dead ends and loops to carry traffic to the avenues. I have two trade centers two recycling centers, three elementary schools and a University. And I no longer use regional buses. Traffic is heavy at the first intersection in prime time but does back out of the city and the cross city traffic, school buses and trash and recycling plus city services can get through with no problems. I can't post an image you can try this link to Google+. https://lh3.googleusercontent.com/-JTddYs1PEQY/UUid-vnU4PI/AAAAAAAABJk/1qHfgywa6u0/w497-h373/Spark_2013-03-19_12-43-37.jpg. I've never tried this.

edit it appears to be a little small. I'll substitute a larger one when I can.

I have the same problem conjestion is starting from othercity. I demolished all crossroads and make a huge one at the far end of the city entrance and all is great :) 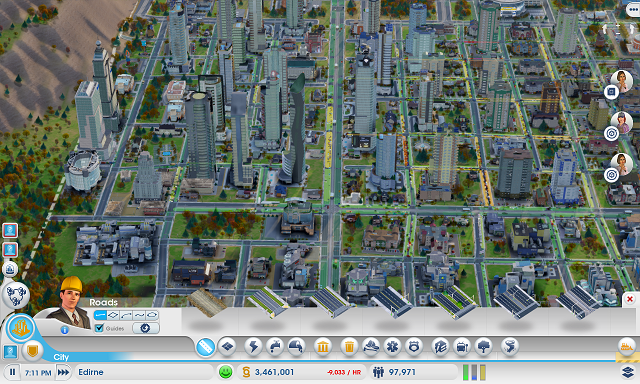 7
Does demolishing or closing city hall upgrades and specialization HQs affect the region the same way it affects my city?
11
What do the City Border colors signify?
5
How do we share our city upgrades to the region?
6
If you volunteer recycling trucks to another city, does your city have to process the recyclables?
6
How can I increase high wealth tourism?
4
How can I reduce commuting workers?
5
Cities cooperation and services
2
How does city resource trading work?
1
How can I claim an abandoned city?
2
Can you make a city all industry and just ship in workers from another city in SimCity 2013?