What is the ideal "block" size in SimCity 5?

In SimCity 5, what is the best 'block' size to use (meaning, how much space should there be between roads)?

How big does a block need to be to accommodate the best buildings while minimizing waste & traffic?

To answer this I'm going to need to establish some criteria for "ideal". I'm going to assume that most people are interested in the most efficient use of a given space for high density buildings allowing you to stuff as much population/commerce/jobs into your city as possible.

Luckily the game itself provides an excellent tool to help you with this. Turning on the "gridlines" feature when plopping a road tile will display gridlines for the last two road tiles you mouse over. The gridline displayed for a given road depends on what road you moused over and what road type you currently have selected.

Mouse over avenue with road selected: The first gridline will provide enough room for two high density buildings back to back making for maximum use of the space given the two road types you want to use.

Mouse over avenue with avenue selected: Same as above

Mouse over road with avenue selected: Same as above

Using the dirt road tool, here is how much space to leave between roads in simoleans. Numbers in parentheses were tried and found to be not enough. 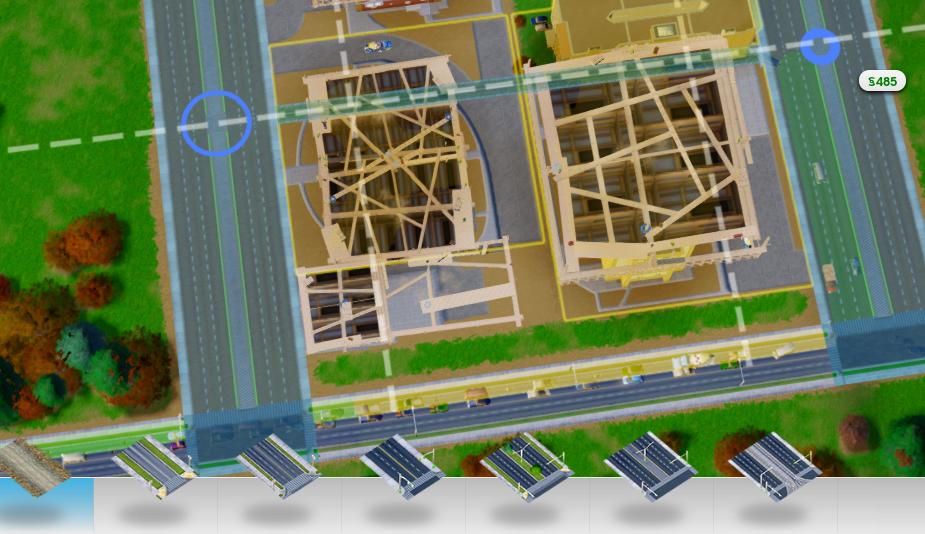 The zoning tool also provides a hint. When adding a zone two rectangles will appear of the appropriate color (green for residential, etc...). The thick rectangle snaps to the road and indicates where the zone will be and the thin rectangle indicates how much space is needed for the largest building. If there is not enough space smaller buildings may still appear in the zone. Also I've seen the rectangle turn red when there was not enough space. The amount of space buildings will occupy is based on the kind of road, high density roads can support larger buildings than medium and low density roads.

This doesn't necessarily tell you the ideal block size, but it does tell you how to get the largest buildings possible for a given road.

Since even on a dirty road some services like firemen or moving truck will never turn left (from the road to a building or other object) but will instead go to the nearest intersection (or end of the road), turn back, go back to the building and then turn right to it, in my opinion the ideal road consists of many intersections, thanks to which paths of cars and buses are shorter, and so they spend less time on the road and so they leave the space for other cars sooner. I may be wrong here, as Sims can't stay on an intersection and an intersection-heavy design decreases movement smoothness, but as I've done some experiments I thought I would share.

The ideal block size for an intersection-heavy streets is 1458$ long avenue (low traffic) or 2914$ high density avenue (without streetcars). Measuring in simoleons is the best way I found so far. In such block, every so-called '4x4' residental building will fit perfectly. Unfortunately it's not same with commercial buildings - sometimes two high density buildings will fit the block perfectly, sometimes one high density building will take about 90% available space, not leaving enough room for anything else (look on the selected building below): 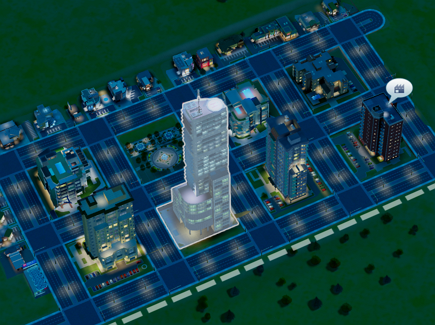 Parks next to it don't fit perfectly as well, but you will get same problem with standard block sizes as well. 6 remaining buildings are residentials of low, medium and high value and they all fit perfectly.

There are many advantages here:

There also are disadvantages:

I didn't test it with industrial zones yet.

Update: I've made a test and spotted some interesting things:

From my testing §242 is the minimum dirt road size for 1 HD building between 2 streets. That is just enough space to fit a soccer field, which is the same width as an HD building. §241 and less will not. I tested the previously posted §239 figure and that is too small for HD commercial buildings.

§266 is the minimum size for 1 HD building between a street and and avenue.

To fit 1 HD building between the edge of the map and the street, the minimum space is §188.

For a megatower facing North, it has an East-West length of §525 and North-South width of §546.

to fit a soccer field, which is the same width as an HD building. §241 and less will not. I tested the previous

9
What's a good strategy for dealing with traffic?
4
Are there any benefits to zoning with empty space?
12
Is it possible to relocate a building expansion after it has been placed?
19
How can I prevent gridlocks?
30
What is a good road layout when starting up a city?
3
Is it possible to change city size in SimCity?
5
Cities cooperation and services
2
How do I troubleshoot the problem of workers not able to get to a workplace?
4
Is there a way to see a Layout Grid in Sim City 5?
5
Have enough room but still needs more for high density?