How to kill Zurvan in the HotS campaign on Brutal?

I have been playing the game on brutal and got the basic skills,how ever I am having trouble with Zurvan.

I saw the movie by Joltzblc and parazx already, but I believe there is some trick to the fight that I have missed. At some point I get too many monsters spawning too quickly and can't manage to do any damage to Zurvan, and then it is just a question of time before I die.

How do I beat Zurvan on brutal?

How I personally ended up doing it: if you notice, the very top left and top right spots will NEVER get hit by his tentacles. I would put all my primal hydras and roaches in either corner and have them attack Zurvan. You can not fit all of your roach/hydras into the top positions, but at least 50% of them will not be attacked by Zurvan until the final stage. When they are hit, move Kerrigan up and use your Mend spell to heal her and your roach/hydra/ultra. 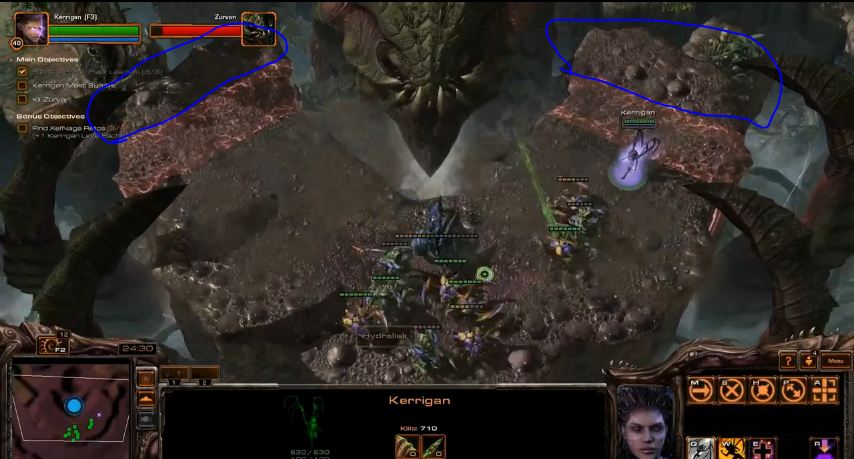 The safe spots are circled in the blue (screenshot taken from PsyStarcraft replay, see first comment on question for link)

I would then micro Kerrigan and the Ultralisk to both kill minions, and to attack Zurvan as much as possible. When minions came up, I would use Kerrigan's special abilities to burn them down while the roach/hydra took down Zurvan. It's also important to use Kerrigan to group the minions together, and use Psionic Shift to attack as many as possible. When the acid spewers are summoned, make sure you burn them down first (they will spawn in a group of 2 with an ultra) as they will two shot your hydra/roach if you let them get attacked.

At the final stage (roughly 10-15% life), I only had the Ultralisk and Kerrigan alive. I was able to defeat Zurvan strictly with them and eventually with Kerrigan only. With her spells she can solo Zurvan alone. I used Leaping Strike and Psionic Shift to mainly get out of the way of Zurvans Attack and to burn the minions down faster. And Mend was used as much as I could get away with it, to keep Kerrigan topped off in case I would slip when microing. 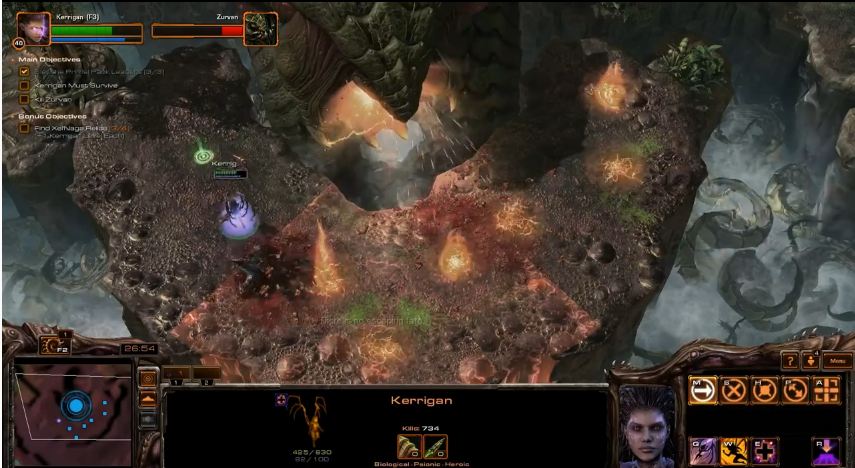 Picture of the last stage where Zurvan uses a cone shaped attack. This is where I used Psionic Shift and Leaping Strike mainly as evade and for burning minions. (screenshot taken from PsyStarcraft replay, see first comment on question for link)

I also beat it all on Brutal, and he was my biggest test. It would take me about 5 attempts, but after I started microing better I was able to take care of him. Hope it helps :)

I thing I only recognized after many failed attempts, is that you can use the "Leaping Strike" on Zurvan himself. This greatly reduces the amount of time the fight takes and doesn't lead to you being spammed by spawned minions.

If you're having trouble doing this head-on, there is a stupid simple method to beat it. It's a bit tedious and takes much longer, but it's also way easier.

This method only requires soloing Kerrigan, so you can ignore the rest of her army. As soon as it starts, just tell the entire army to fire on Zurvan and then forgot about them. They will be killed off pretty quickly. Focus all your attention on Kerrigan.

The far top-left and top-right corners are dead zones that Zurvan's tentacles never hit (Falcon165o's answer provided a screenshot that demonstrates this well). The trick to make this easy is that you can burrow Kerrigan in this dead zone. In this state, nothing can hit her -- she is out of range of Zurvan's tentacles, and the minions can't see her.

And if you position Kerrigan at the very top edge of a dead zone, she is in range to hit to Zurvan. So the idea is to:

That lets you beat stage 1 without even breaking a sweat. When Zurvan hits stage 2 (I think that happens at 25% life), the minions stop spawning, at which point it becomes a cakewalk. The rotating cone of fire is easy to dodge just by walking out of it (or psionic shifting in a pinch) and the little electric fire things don't hurt too much. So for this stage it's as simple as:

That's it! If you're paranoid about making a mistake, save the game frequently.

When Zurvan slams the ground in the first phase, it will also damage all the units he spawns. Use Kerrigan and the Ultralisk to kite the enemy Ultralisk into the danger zone, and make sure to avoid it yourself. It may take some practice, but it drastically speeds up your clear times for each spawn.

4
Killing Air Starcraft 2 Devil's Playground
7
How to best manage Protoss Observers in StarCraft 2?
19
How do I recover from a cannon rush as Protoss?
11
Is there anything missable in the HotS campaign?
4
Is there an infestor evolution in HOTS campaign?
1
How can I learn to manage multitasking when fighting in Starcraft 2?
3
How to pass “Evil Awoken” mission of prologue campaign on Brutal?