Is it possible to get the old Microsoft Reversi from Windows 2.03 to run on Windows Vista? It's an old classic! It looks like this: 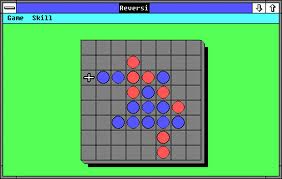 @agent86 had a fairly good answer. I've tested the following step-by-step solution which is essentially what he suggested. Please note that this is a fairly convoluted method of running Reversi.

First, get a copy of DOSBox and install it inside Vista. If you don't have a copy of Windows 3.1 on your hard drive already, see this guide on how to create one from the original retail floppies. How you acquire those is your business.

Once you're able to successfully mount a copy of Windows 3.1 in DOSBox, I'd suggest modifying the autoexec for DOSBox, as mentioned in the guide above, to make Windows boot automatically upon running DOSBox. See if you have Reversi preinstalled as part of Windows 3.1.

If for some reason you do not already have it as part of the OS, here is a link to a Reversi executable. Place that executable in the root directory of your 3.1 installation (i.e. the folder you mounted in DOSBox as drive C), then start DOSBox and boot to Windows again. Navigate using File Manager to the root of drive C, and go ahead and run it from there.

Proof of functionality; I was able to successfully play a game of Reversi like this. Feel free to ask if you need more clarification on any steps. 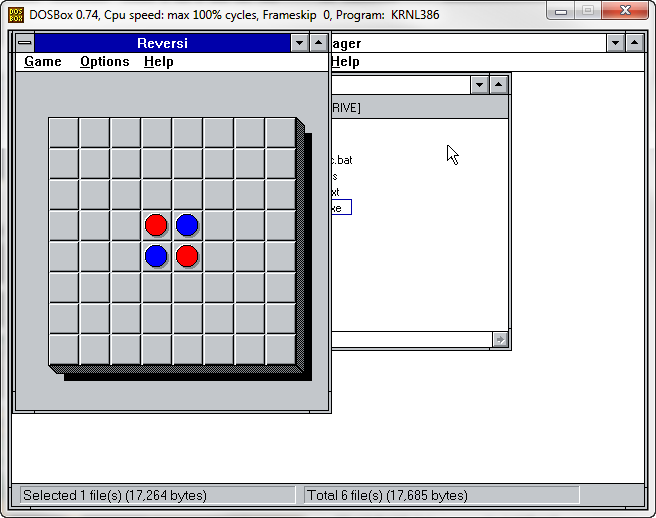 First, you're going to have to find a copy of the EXE. You'll probably need original Windows install floppies for this. Luckily, Reversi was also present in Windows 3.1, which was a popular version of the OS, and copies are relatively abundant if you know where to look.

Playing this game natively in Windows Vista is possibly going to be problematic. The problem with games created for Windows that predate Windows 9x (and probably at least some percentage that came out afterwards) is that they were written for a 16-bit OS. Microsoft doesn't support 16-bit applications on 64-bit Windows installs. Installing 64-bit Windows became fairly common with gamers using Vista, and especially common with Windows 7 and Windows 8.

You can emulate a Windows 3.x environment by installing Windows into DOSBox or some other emulation environment like VirtualBox. Again, you're going to need the original, still copyrighted version of the Windows floppies in order to do this.

If you're willing to part with the old-style Windows Reversi, Microsoft partnered with Bicycle to produce a version for Windows 9x as part of a board game collection. Since this is a 9x title, running it on Vista might be slightly non-trivial.

... or you could just say "forget this" and play it online instead.

It's technically not true that there's a processor limitation. Intel's processors still support 32-bit and 16-bit modes. The 64-bit OS is the issue. If you really wanted to mess with it, you could probably run FreeDOS directly on the hardware and actually use Windows 2.03 directly. As long a you have a PS/2 mouse and have legacy support enabled in the BIOS, you should be able to get primitive VGA support and have it see the standard 640k of RAM.

One can use Winevdm https://github.com/otya128/winevdm to run 16-bit Windows software on modern Windows version, including the applications developed for Windows 1.0. 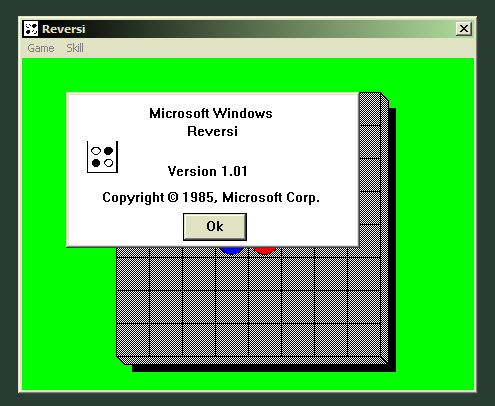 Not the answer you're looking for? Browse other questions tagged backwards-compatibility windows reversi or ask your own question.