How can I get rid of the message that pops up sometimes when starting Call of Duty 4 - Multiplayer?

Your computer appears to have changed since the last time you ran Call of Duty 4: Modern Warfare.
Would you like the game to configure itself optimally for your new hardware?

This is recommended for most people.
It will change your system settings but not your controls. 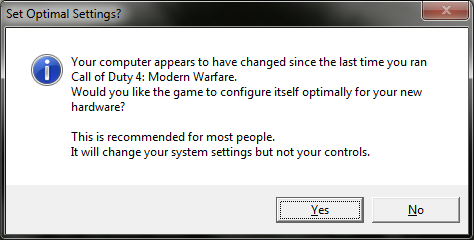 I have tried these different solutions, none of them works:

I have a sense that this message is linked to the sys_configSum variable located in the config_mp.cfg file, because sometimes this variable is equal to "0", and some other times to "4379996", but I can't figure why it changes.

PS: I do not use Steam.
PPS: The config_mp.cfg file is located under C:\Users\[user]\AppData\Local\VirtualStore\Program Files\Activision\Call of Duty 4 - Modern Warfare\players\profiles\[profile] for me.

I had the same issue as you. Every time you join to a server. Do not quit the game using the command "/quit". Instead of this, press ESC -> Disconnect, and to main menu press quit button. Doing this, next time you connect to call of duty 4, you don't see anymore the pop-up. The /quit command is a "forced close" of the game, and causes to appear the pop-up.

Not the answer you're looking for? Browse other questions tagged windows-7 call-of-duty-4-modern-warfare or ask your own question.

8
Fallout New Vegas quits to desktop with no error message
4
Unexpected Blast in Call of Duty 4
3
Problems with playing Battlefield 2 where "My Documents" are not in the default location
6
Steam + Call of Duty 4 problem
4
Jet Set Radio HD crashes
5
How to fix the Call of Duty 4: Modern Warfare Multiplayer crash on startup?
5
Is it possible to install/run 16-bit games on Win 7 32-bit?
1
Disable "Server Violation: Punkbuster Disabled" message while playing COD 4 with BOTS