What is a good road layout when starting up a city?

First things first: I know it depends on the resources etc how exactly you start out.

Whenever you start out with a new city, you need to make sure you don't run into traffic problems later. Best for this is having the medium avenues around the city. But those are expensive and therefore, you cannot lay out the basic foundation of your city at once.

What is a general tactic to start out with for roads, without having to replace them later on?

Do you use all 3 loans? Lay down 1 part of the city and continue later on?

Screenshots of an example would be nice!

I'll take a stab at this.

First thing is to draw your main avenue out. 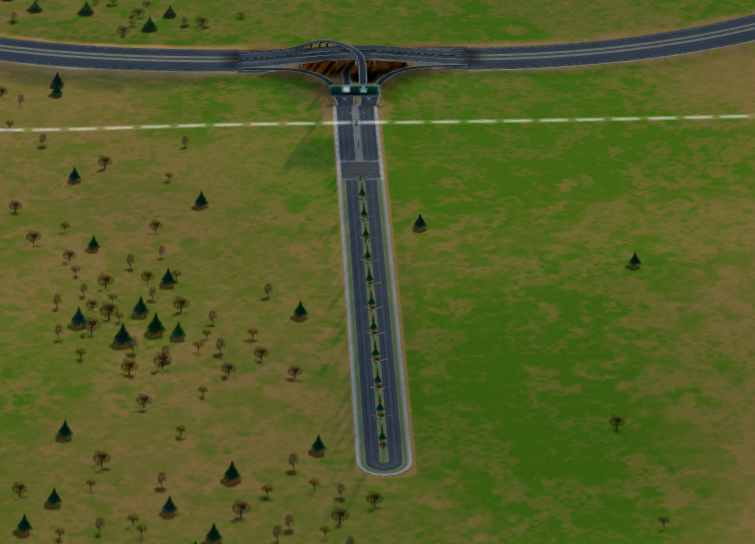 Second, look at the direction of the wind. Note this direction because you want to place industry down wind and inital water away from that industry. 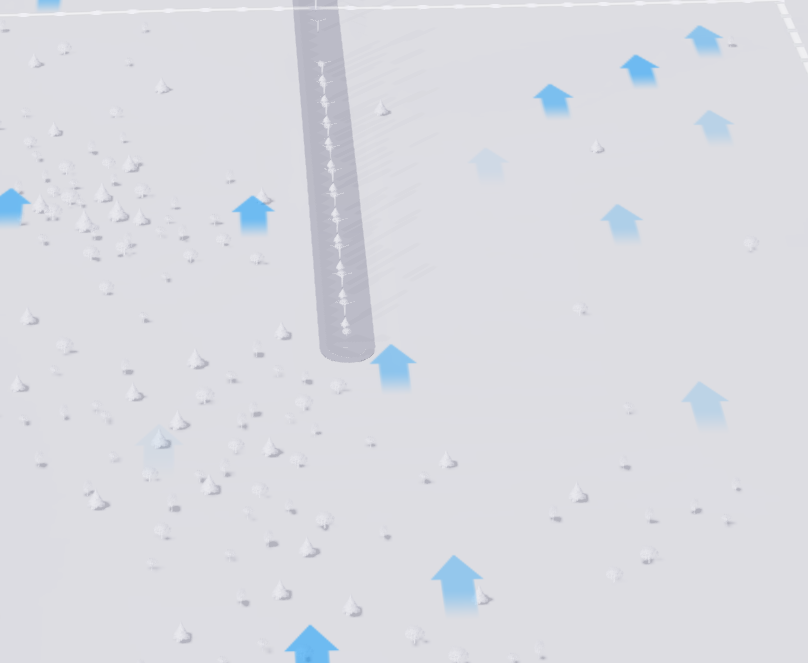 In my case its north towards my highway, meaning my industry/dirty polluting things will be at the top.

There are two ways to go about this like you said. Either you can plan out and place your cheap roads first, then destroy roads later, or just slowly expand based on your funds. Speaking of funds, do NOT be afraid to take out all 3 loans. If you have a grand plan in advance regarding road layout, you can afford the hit in your monthly income since early on you will have NO service expenses so income will flow fine. Just remember to get power, water, and enough road area for initial RCI.

Okay so for this plan I'm using a road layout system of Halby on YouTube. It basically involves a lot of T intersections and L-shaped roads to get the main traffic on your avenues and avoiding the side roads. This is my first time doing this from the start so I hope it goes well! 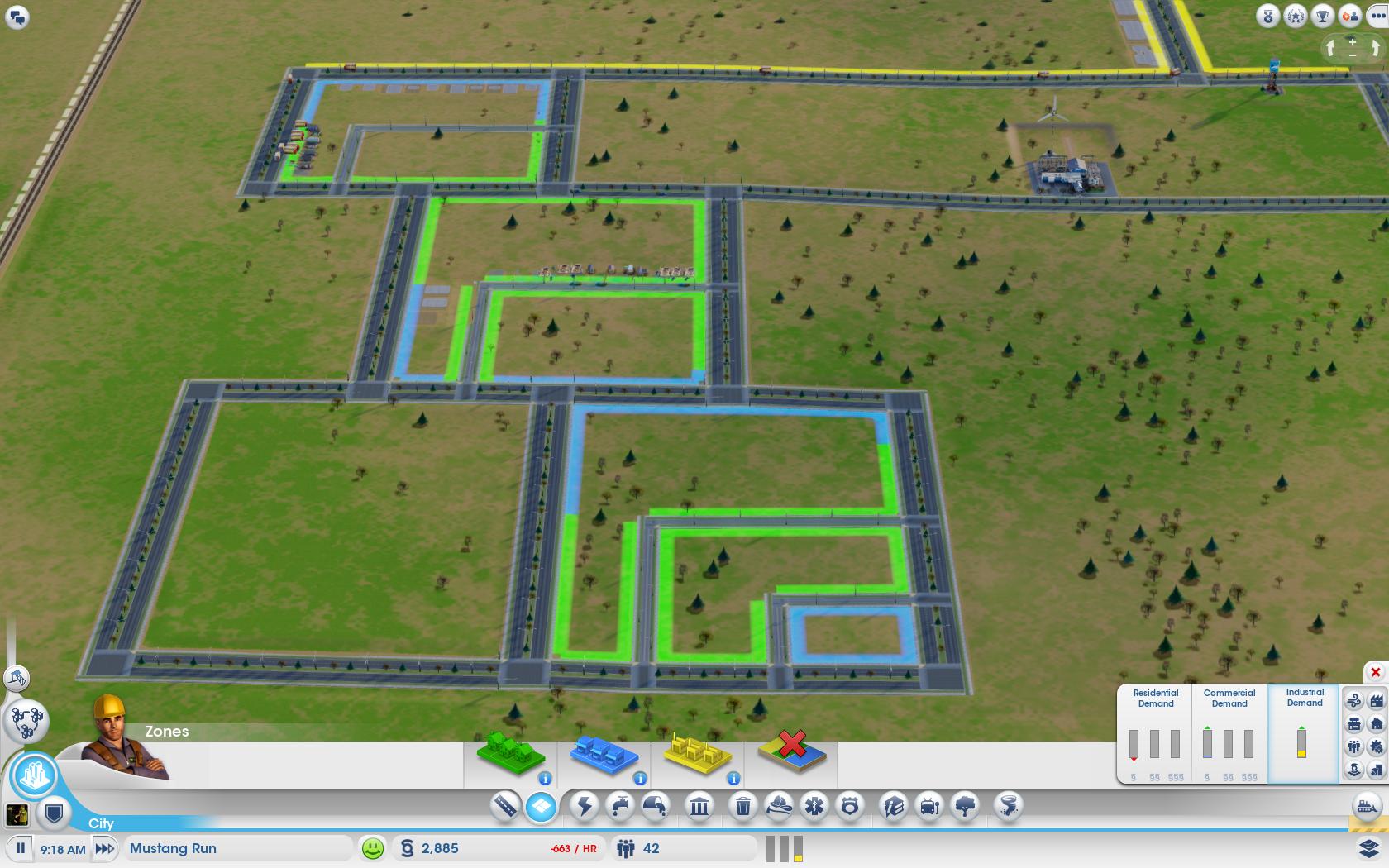 Before this point I took out 3 $25k loans. It was enough to get this much roadwork down.

It's important to mix your commercial and residential together closely. If a sim can WALK to a local shop, he won't have to drive, and we all know traffic is the bane of everything negative in this game. 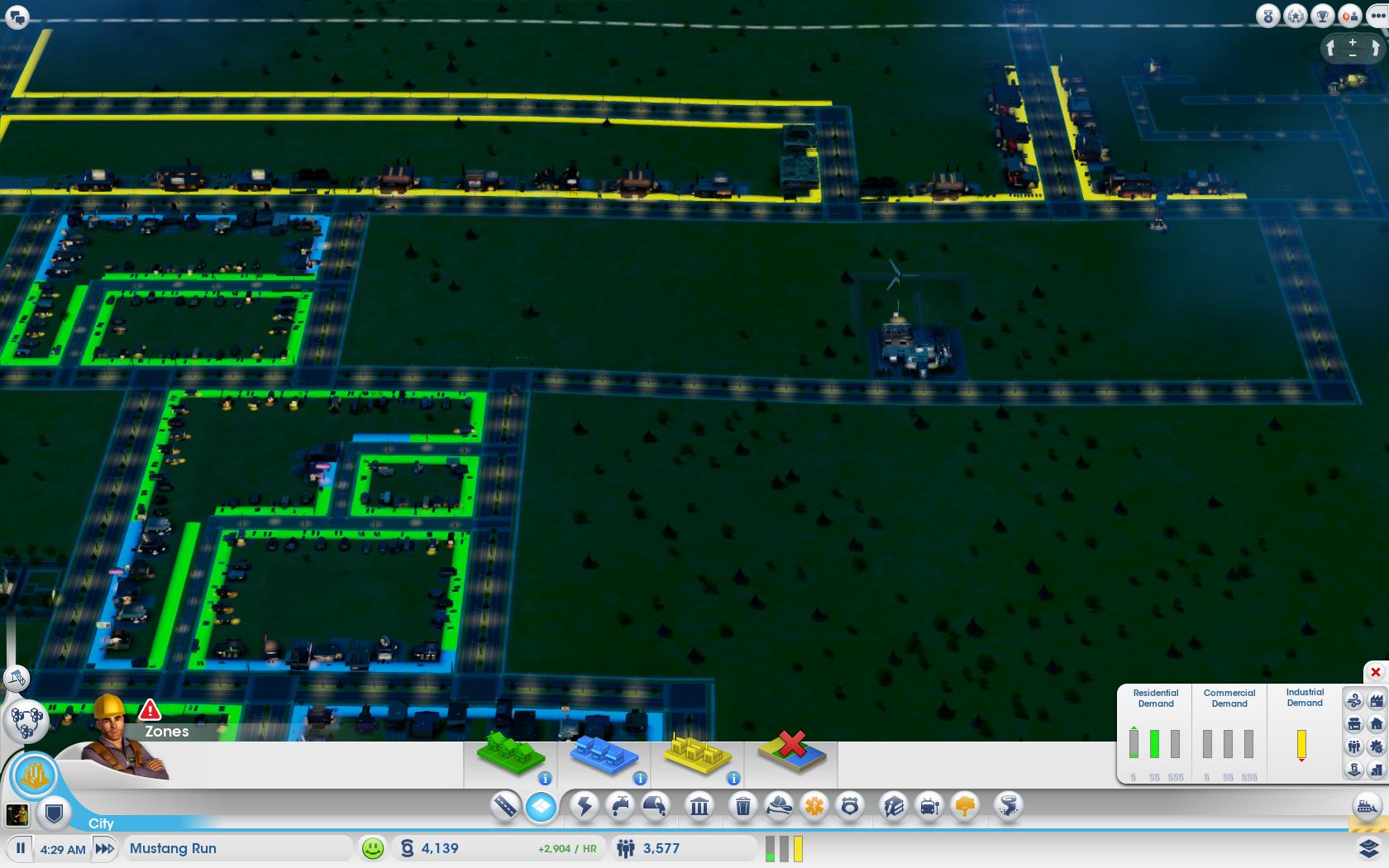 Stick with Medium (or Low) Density roads. The reason I say this is the job requirement for Commercial and Industry High Density buildings is much much larger and will wreck your city if you're not prepared for it.

The idea behind this road layout is: 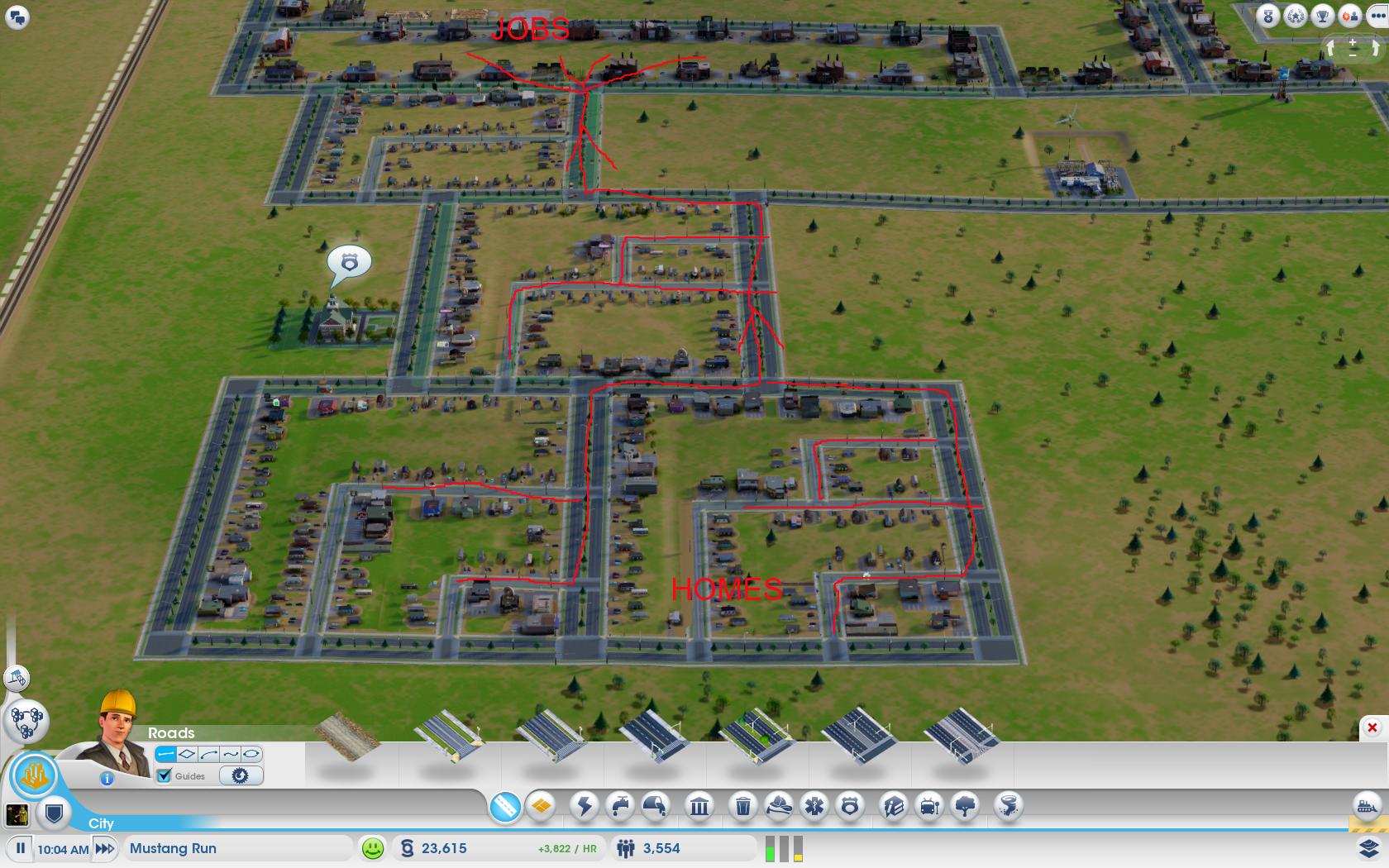 In order to drive to work the sims will avoid driving on all those side streets and basically FUNNEL them towards the avenues. I may not have the perfect spacing here, but that's the general idea. Avoid making new "shortest path" roads since that's the direction your Sims will want to take by default. This strategy does cause a lot of intersections so I may have to do some tweaking later.

Also, as I noted above, avoid 4-way intersections as much as you can. The reason for this is it can cause gridlock when compared to T-intersections because there are less "left turns".

Also note at the moment mass transit is buggy so it causes general traffic problems. Street Cars get stuck (apparently only if they have a lot of intersections, one-loop is OK), too many Buses flood from the region, Buses follow each other around in packs, Service vehicles get buggy and get stuck in the roads. Basically anything you can do to lessen the burden on your traffic (including limiting 4-way) the better. One of my worst traffic-jam cities (120k pop) has 100% avenues with 4-way intersections. Horrible idea. One of my more traffic free city (80k pop though) has 95% medium density stop signs and hardly any stop lights. Go figure.

I have been seeing recommendations that park-n-rides are better than Bus stops because of limiting cars vs just transporting walking people. I don't know so much but its definitely smart to put some park-n-rides near the region entrance. This will allow incoming cars stop and get off the streets. 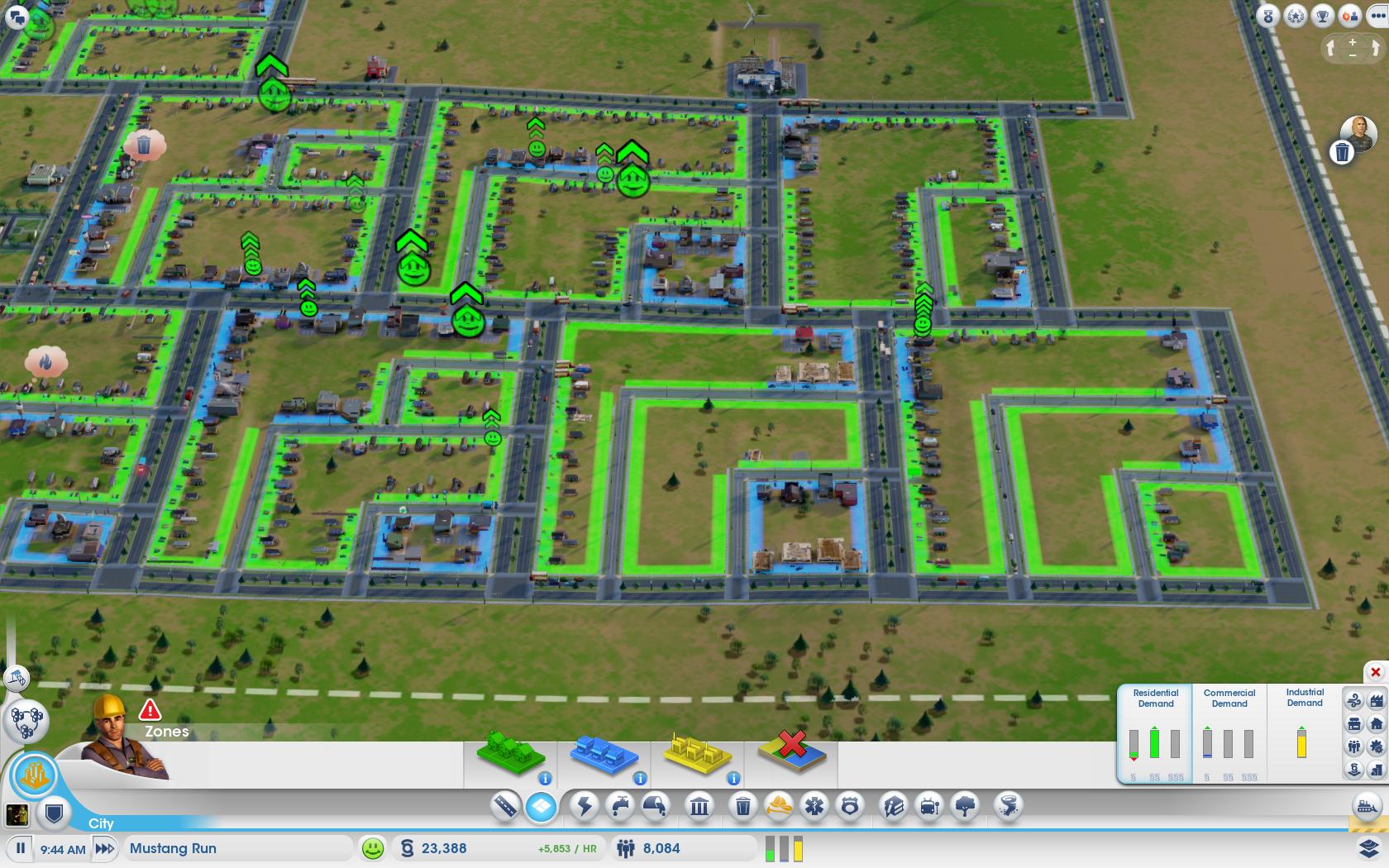 Avoid dead end roads. It may be tempting, but you will run into problems because of the dumb nature of sims. Basically a larger number will start heading for a house/job/business. If it fills up and they haven't arrived yet, they have to turn around. This causes unnecessary intersection issues. If you can connect your dead-end road somewhere, they will continue along their way. I don't know how big of a deal this is in the real world but it seemed logical to me when I read it. This is especially problematic if you have long dead end roads.

Hopefully this helps. There are all sorts of different types of layouts as well. Circular cities, "Palm" layouts, straight squares is what most people go for.

Anyways good luck! I would recommend reading as much you can about traffic and theories people have to broaden your understanding of traffic. I might edit this post if anymore ideas pop in my head.

One thing I didn't discuss was Commuting and how this can wreck havoc on your ideal road layout setup. 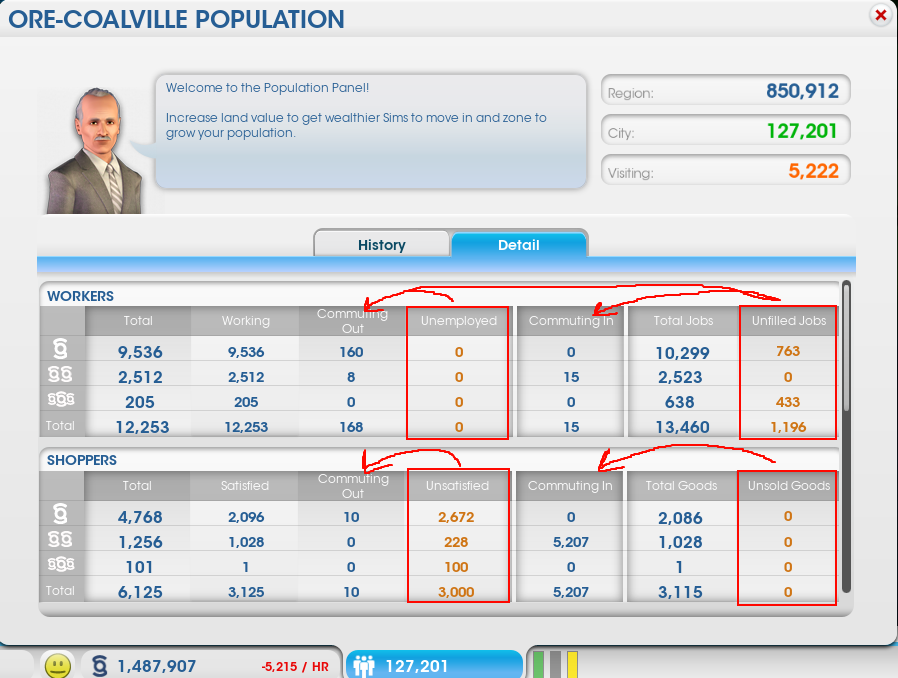 If you have another city in your region, your main goal should be to closely monitor your population details (ignore the RCI guy). Strive to have low Unfilled Jobs and low Unemployment. If either is high, it will cause Commuters in and Commuters out, which can add extra burden on your traffic system and bring any city to its knees.

I wanted to also bring up the idea of placing important and traffic heavy services opposite of the flow of general working/shopping residents. The thought here is to put them in a location that will not impact the highest traffic roads. Examples of this would be: Police, Fire, Schools (Especially University! This is VERY important), Buses, basically any service or building that is going to bring traffic or depend on getting out to do their job. This applies to tourism and casinos as well, you don't want your worker traffic going to the same place as your tourists.

In my example services would be ideal in east/west direction as worker traffic flow is going north/south: 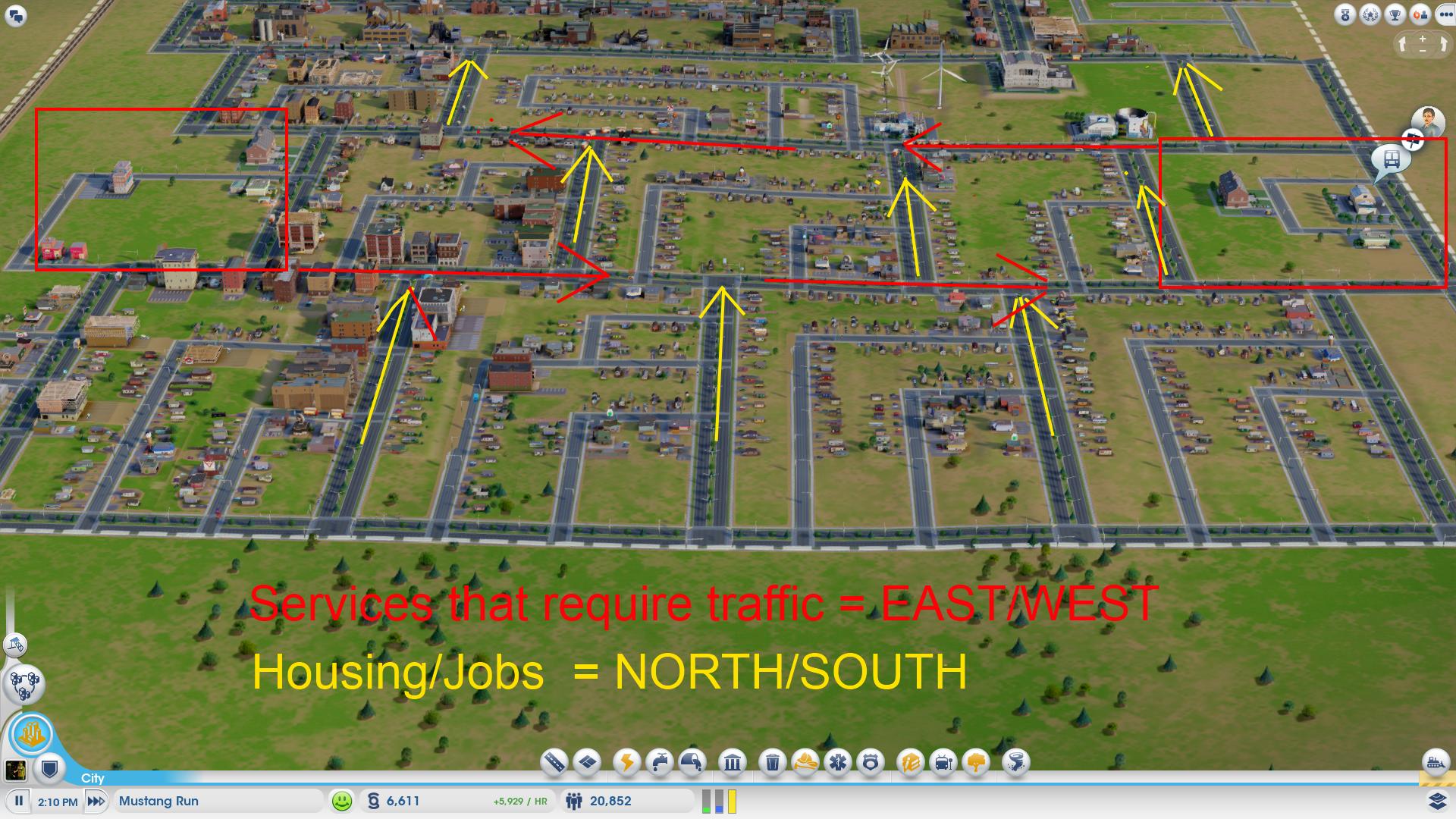 The best way to lay roads in SimCity would be in large squares or rectangles. As for the roads, I suggest just laying a basic road at first (I believe it's the second from the menu), but keep in mind when you're placing the road that you need to expand them and so make them wider. The districts should speak pretty much for themselves. An industrial zone in a corner far away from residential and commercial zones should be easily accessible. 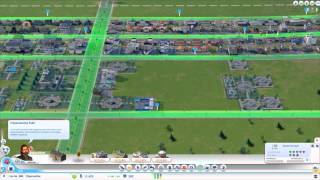 I applied most of @teeone's tips except for a few things:

I still don't need public transportation at 350,000. The traffic builds up from time to time but it clears up just as fast.

The following is a simulation in sandbox with only money cheat activated. Everyone is tax-exempt to encourage growth. A real gameplay would require finding the ideal balance between industry, commerce, and housing.

Take a look at the layout at 40k people: 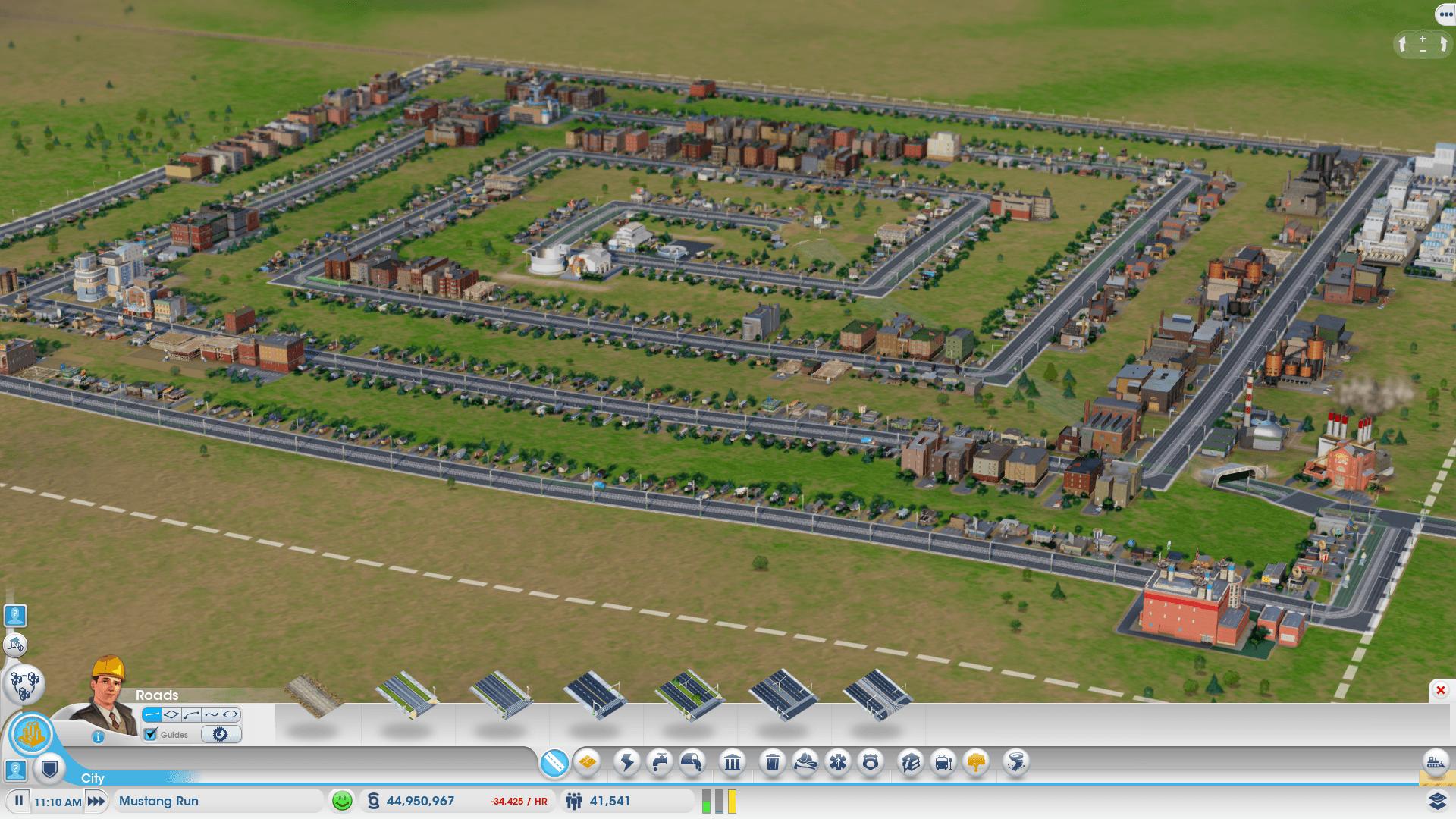 At 100k you can see light green traffic here and there but nothing big: 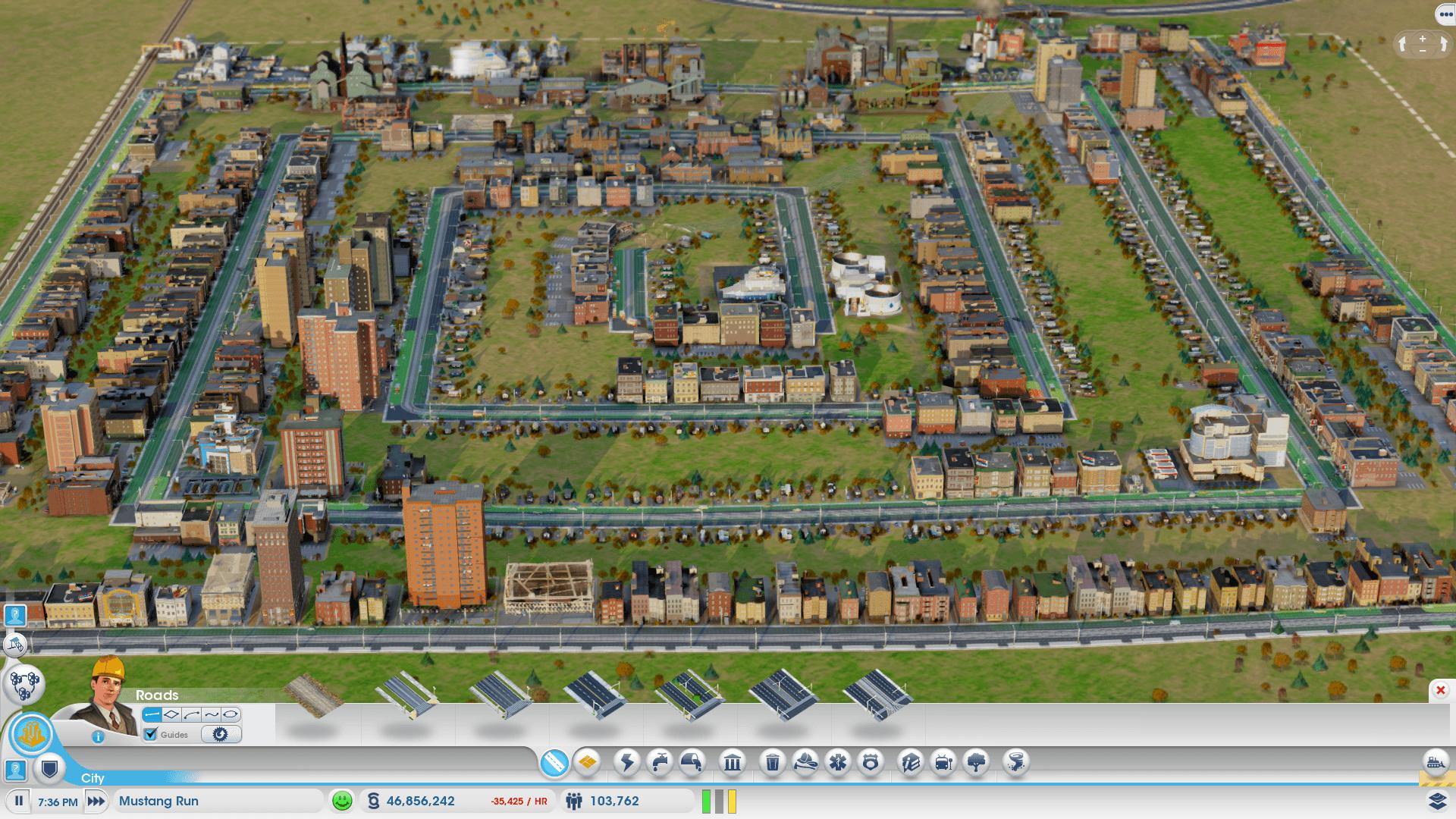 200k. This is where I thought it would end. You can see the traffic is starting to get worse but it doesn't stop at any point. They just keep going like a river flow. 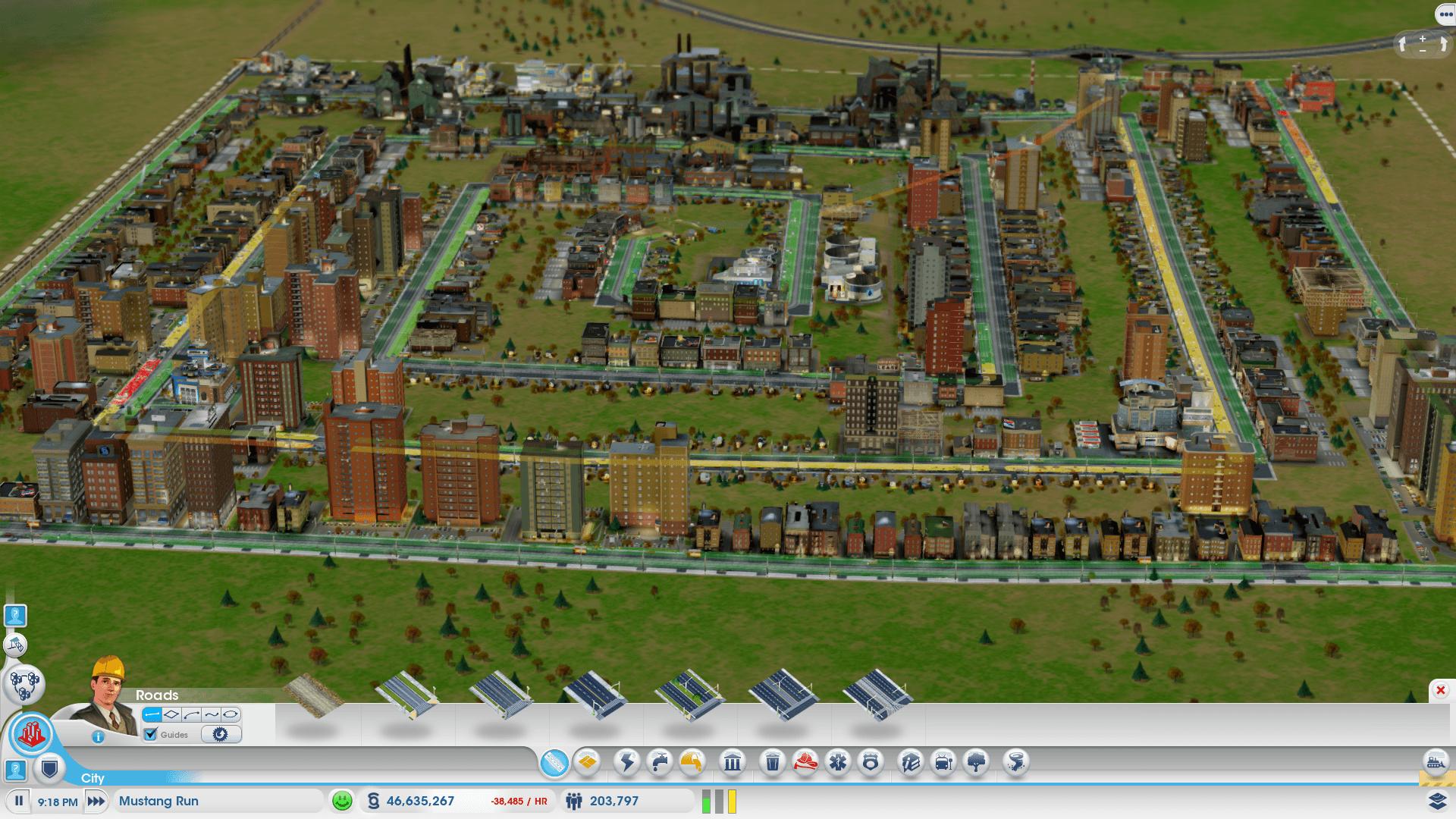 350k. I got bored. I'll probably continue pushing this layout to it's limit before trying it outside the sandbox. 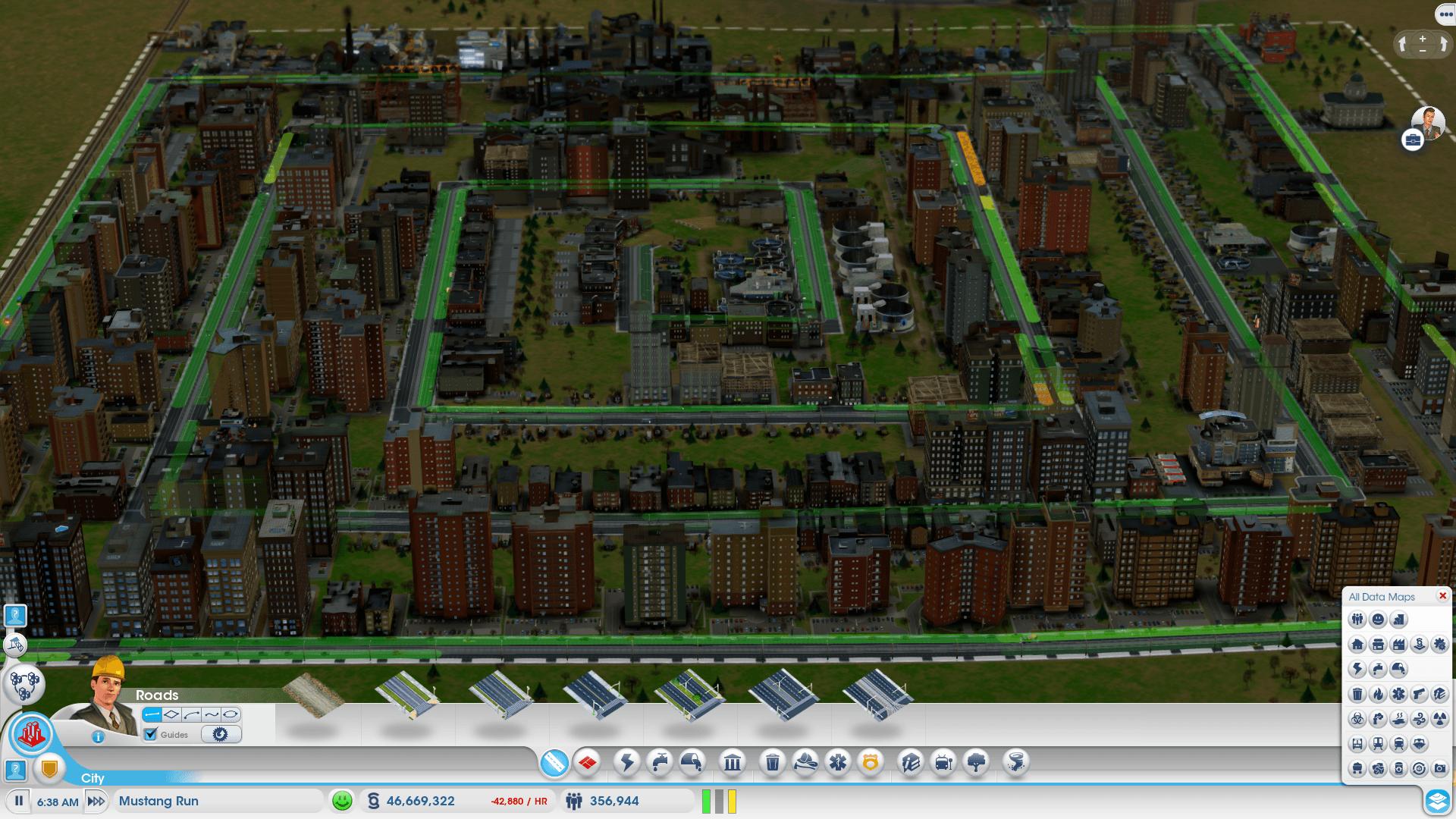 The general idea of this layout is to exploit the Sim AI that will always commute to the nearest building, not a specific job or house. They behave like a river, we treat them like one.

If you do 3 circles of avenues, an inner, a medium, and an outter, it really solves all traffic problems.

19
How can I prevent gridlocks?
9
What's a good strategy for dealing with traffic?

9
What type of resources should I consider for an initial city?
4
Are there any benefits to zoning with empty space?
11
What do the City Border colors signify?
5
What effects do city specializations have on buildings in your city?
3
What effect does completely destroying your city have?
8
How do you trade commodities between cities?
7
What rate should I set taxes at in a medium sized city?
3
Density Bar - what happens when it completely fills?
4
Is there a way to see a Layout Grid in Sim City 5?