Does my opinion of other people matter?

For example, my wife likes me well enough, but I don't like her much: 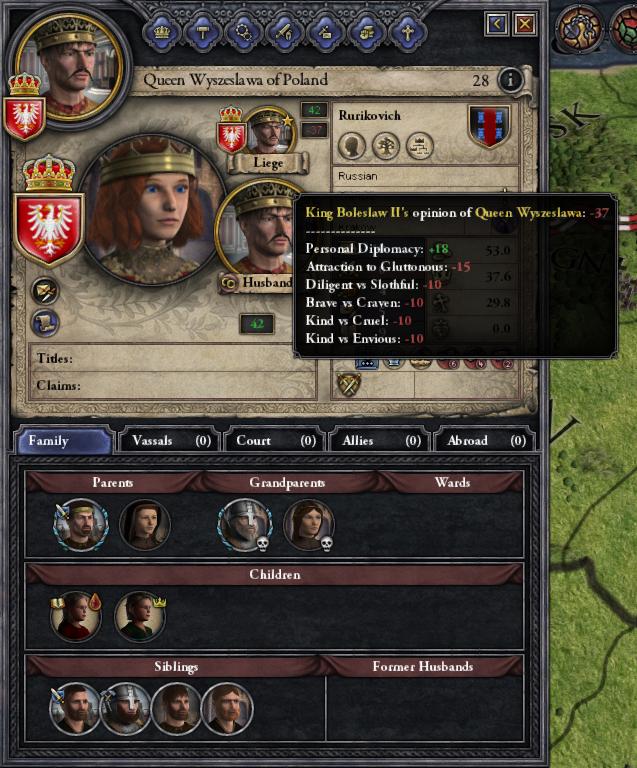 Does that impact the chance of having children, maybe? If so, it doesn't seem like it has much of an impact, since we've already had two children after not many years.

And as far as I know there's no way to switch your character aside from death*, so it's not as if the opinion your current character has will matter after you take control of your heir. I suppose it can indicate incompatibilities between me and other people that might flag problems I should deal with. Does it matter otherwise?

* During normal play, I mean. I know I can save and load as someone else, but the sort-of cheat of switching to NPCs to manipulate the state of a savegame doesn't interest me. I'm only interested in the opinion's relevance, if any, to actual game mechanics.

It has an impact when the person is your liege. Negative opinion means your liege gets less taxes out of your demesne and less troops if (s)he should decide to raise your levies. Other than that, the opinion modifier is mostly used by the AI.

Also, from what I understand, your opinion of your spouse does not impact fertility.

(As an aside, your own opinion is a handy indicator of a vassal being in a faction conspiring against you. Mouse over your opinion of a character and if you see a -10 modifier "Faction member" you know they are up to no good. At this point use standard tricks to get them out of the faction before it becomes too powerful.)

Unfortunately, I don't think there's been any documentation of this having a particular effect. However, I think it probably works in a lot of the ways it works for you interacting with NPCs. The most evident is that the NPCs are not likely to ask you to join a plot to murder someone that your character likes, for instance.

I think the primary (only?) use for your personal opinion, is for roleplaying purposes. For example, if your character really loathes his wife, he might want to divorce her or have an affair – and if he has a high intrigue rating, it might be in his character to see her dead.

Not all players choose to roleplay, but for some it adds a bit more flavour to the game.

7
Does the bishop stats really matter?
13
How to check opinion between any two arbitrary people?
4
Does council opinion matter?
6
Fulfilling vassals' ambitions gives no opinion bonus. Is this a bug?
4
Looking for another opinion on whether my son will inherit Byzantium
3
Resolving betrothals 'stuck' due opinion change
2
Revoking bishoprics without opinion penalty
2
Grant Titles to Non-local people
1
How can I steal a duchy under my liege?