What was up with the coin flip question?

During the game, two characters ask the player to flip a coin that results in heads.

What's up with the question and the results on the blackboard (all on heads)? 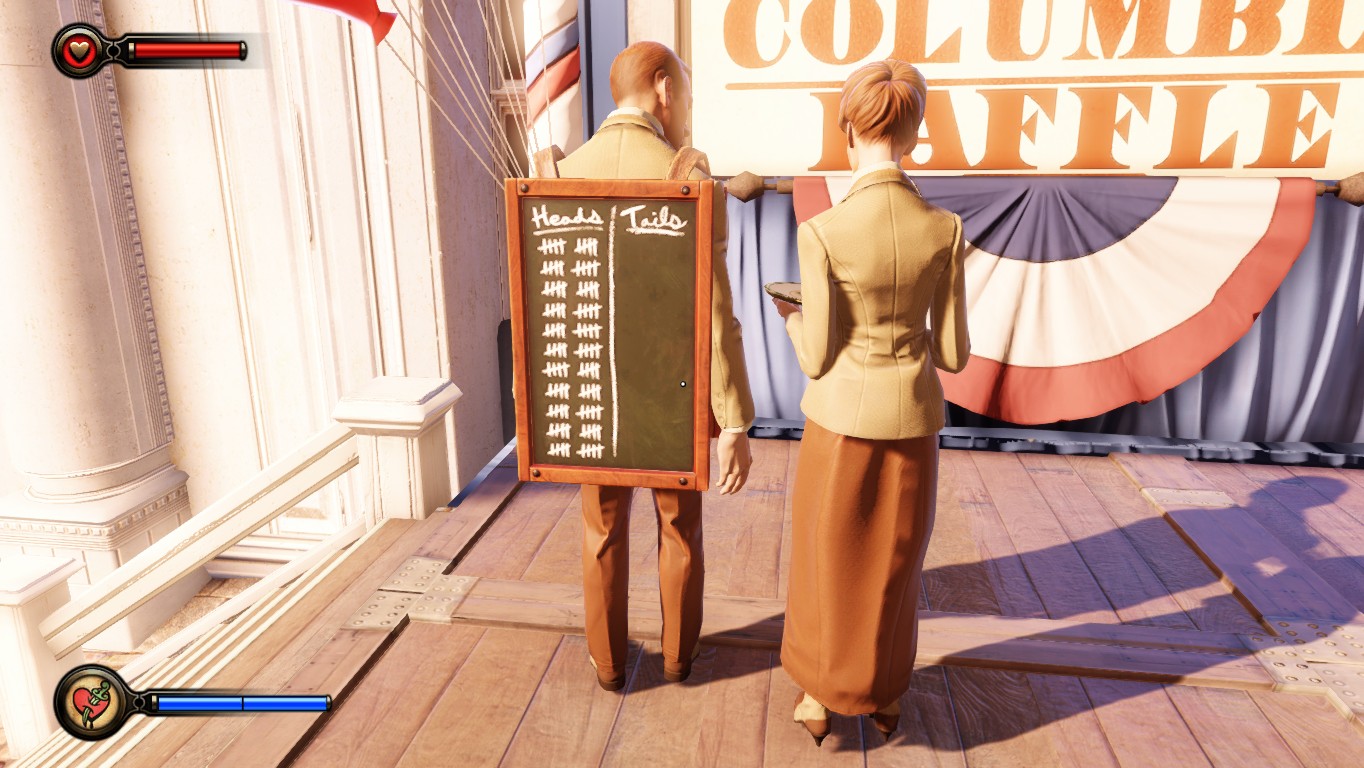 These two characters are just checking something regarding Booker.

That "something" is connected to the whole game plot and requires a deep explanation, so unless you finished please don't read the following because of SPOILERS:

Let's start from the beginning: These two characters are the Lutece "siblings"... well, truthfully they are the same person from different dimensions. Rosalind is from the dimension where the game mostly happens; Robert might be from Booker's dimension.

There was an assassination attempt on them to keep the secret of Elizabeth's origins but it went wrong since their dimensional machine was involved and, instead, they became "unhinged" from space and time. After getting "unhinged" they regretted stealing Anna (Elizabeth) from Booker and decided to fix it. How? By transporting Booker to the universe where the game happens.

Unfortunately it didn't go so well and Booker probably died or was unable to save Elizabeth for some reason. So they decided to try again, in another very similar dimension. They did this 122 times... until the Booker the player controls finally did it.

Meanwhile the Lutece "siblings", being the scientists they are, keep doing what scientists do: acquire knowledge by research and testing. So they tested Booker with the coin flip, and by Booker I mean all the "Bookers" they helped to get on Columbia. The result of that coin flip all ended as heads and that is what they recorded on the black board.

On a side note, Robert believes that coin flip would change sooner or later, Rosalind did not. It never changed, not even for the Booker that finally did it. This is one of the "Constants" mentioned in the game ("Constants and Variables").

@Diogo Gomes' answer is excellent and pretty much complete, so I have little to add, but it is worth noting that later Elizabeth tells Booker that some things change and some points are fixed - e.g. it always begins with a lighthouse. The coin toss is therefore almost certainly a fixed point in the story, and this is why it always comes down heads.

This scene is actually a reference to Tom Stoppard's play "Rosencrantz and Guidenstern are Dead", the Luteces also being minor characters in someone else's story with their own tragicomic existence. In that play, the coin is tossed 92 times landing on heads (why the extra 30 times here, I am not sure). It seems likely that here, as in the play, the scene is used to draw the attention of the viewer to the existence of the fourth wall (i.e. that they are experiencing a somewhat self-aware piece of art rather than viewing reality), as well as underlining that Booker, like Rosencrantz and Guidenstern, cannot escape his destiny because it truly has been pre-ordained (by Mr Levine and Co.).

What are Constants and Variables?

This is honestly a hard thing to describe as we are not privy to the entire set of time/dimension traveling rules in this game. However, we can get some snippets of what is certain from the events in the game.

The Lutece twins speak of constants and variables. In short, this means that in every timeline, there are certain decisions at are always made, or certain events will always play out in a certain way. They experimented this with the coin toss experiment, where Booker will always flip the coin heads, as he has done 122 times previously. They also demonstrated the inevitability of certain events. In the beginning of the game, Booker receives a telegram to not choose #77. However, during the raffle, Booker will always pick #77, which will set off a series of events that tag Booker as the False Shepard and enemy of Columbia.

So, back to the original timeline, we have Comstock, who grows in power and creates Columbia thanks to the efforts of Lutece. However, his repeated experiments with tears has rendered him infertile and caused other debilitating side effects. Thus, Comstock planned to steal Anna, Booker DeWitt's daughter from the other world, in order to continue his dream to create the Lamb. However, once this occurs, the Lutece twins, in one of their tear experiments, see a future in which Elizabeth rains fire and brimstone on the world. Before they could do anything about it, however, their machine was sabotaged by Fink and they were caught in the blast. But instead of dying, they seemed to have been scattered across the possibility space. However, in this state, they do not risk tampering with the timelines. They instead continued to find the person who would be able to actually save Elizabeth: Booker DeWitt.

Thus, the twins appeared to Booker 20 years after he lost his daughter and brought him over. However, upon crossing his memories changed, prompting curiosity from the Lutece twins. They continued this over and over, observing each Booker that they encounter, noting of certain constants and variables that occur whether or not Booker actually succeeds in saving Elizabeth in that timeline. One constant they realize is that there will be an infinite number of timelines with Comstock in it, thus Booker will always lose his child in every timeline. Even if Booker does succeed in one timeline, in another he is unable to stop Comstock. This is the universal Constant, that no matter how many times they repeat this, these series of events "happen, happened, and will happen". In order to truly stop Comstock's ambition, they needed to find a Booker that would be able to break this circle of events.

The only way to do that is to find the Booker who would realize the existence of this Constant and end it before it all begins. And, it seems that #123 might be it...

The coin toss is apart of their(Robert and Rosalind) thought experiment. It keeps track of every Booker that has come to Columbia to stop Comstock. This represents the cyclical nature of the game, showing us that no matter what we do, the outcome will always be the same. Booker is trapped in a never ending loop, and the coin toss shows that he will never escape it.

30
How can Booker and Comstock meet?
18
What is the “Only one obstacle?”

3
What are the consequences of my choices?
59
Does it make any difference if I choose the Bird or the Cage Brooch?
7
What role does the number “77” play?
10
Who or what was Songbird?
15
What did the woman in the boat mean when she said “He doesn't ROW”?
9
Who was lady Comstock?
10
What “futuristic” songs play during the game and when?
5
Should I use the Hand cannon or the Shotgun for close-range combat?
8
What is the coin that Booker can't pick up?
8
Elizabeth's necklace changes to the opposite?