Density Bar - what happens when it completely fills? 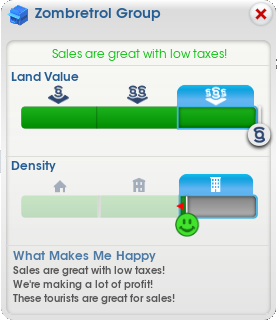 also, just a side question, why are the first two bars shaded weirdly? Is it just a graphical glitch?

There is no "next step" beyond high density as you suggest. Density is just low, medium and high. The density raises along with the Sims' happiness (thus the smiley face). If the density bar fills 100% it just means your Sims are really really happy and will stay high density. Think of it like a progression bar. Once they are continuously happy for a certain amount of time, they are ready to upgrade to the next level. However, roads can also prevent going to the next level of density.

Since Density is a progression bar based on their happiness, if they are really mad the building will either lower to the bottom level of their current Density level and sit there: 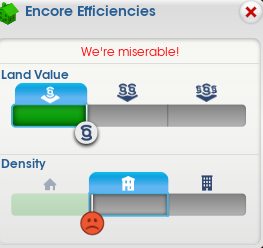 Or they will abandon for whatever reason they are mad. I don't think I've ever seen them downgrade a density level. Typically if they abandon, a same-sized building will move in.

As for the shading, I think the intent is to show the building has grown past the first 2 bars of density by shading the previous ones lighter. The reason why Land Value is different is because they will not actively lower Density (change their building) but they WILL actively lower their wealth value.

14
Does the capacity of the road influence how many agents can travel down it simultaneously?
9
What's a good strategy for dealing with traffic?
24
How can I increase the density of residential zones?
5
Why are my sims complaining about too many injuries?
5
What does it mean when residential demand is halfway faded?
5
Why do different casinos generate different amount of money?
6
How can I increase high wealth tourism?
4
Are high density buildings larger on avenues than for streets?
5
How do I adjust for overproduction from Industry?
3
Raising commercial/residential wealth in SimCity? When should I do this?