Do spine crawlers *in* the mineral line affect the rate of resource gathering?

I sometimes like to put spine crawlers in between the minerals and the hive when I am really sick of harassment. How much does this affect the rate of mineral collection? I reckon there must be some impact, since nobody seems to do it.

It depends on where the spine crawler is placed. See in this picture: 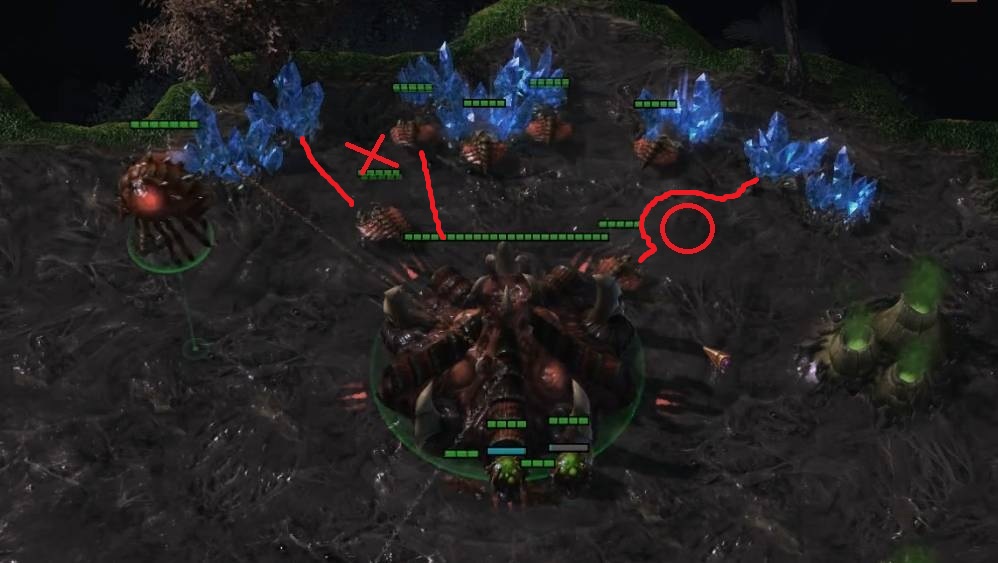 If you place a spine crawler at the X position, it might force drones to take a slightly less direct route to the minerals, if at all. The mining rate of the affected drones will decrease by a near-zero amount, pretty much negligible.

However, if a spine is placed directly in the way of the shortest path, such as at the O position, the rate will be affected noticeably. The drone will have to move around the spine in a crescent shape (as shown). This will increase travel time by a fraction of a second, which doesn't seem like much, but can add up.

Here are some rough calculations:

Accourding to liquipedia, the 1st and 2nd drones assigned to a mineral patch collect 40/minerals per minute. Drones collect 5 minerals per trip, which means a drone will make 8 trips back and forth every minute, each trip lasting 7.5 seconds.

If a spine crawler is placed in the direct path of a drone, I'm estimating it adds ~1/8th of a second to the travel time of each trip. Let's say it would normally take 20 minutes to mine out an entire base. The affect that a 1 spine in a direct path will have is:

This may not seem like much, but if you have 2 or 3 spines and a fully saturated base, the opportunity cost would be fairly sizable.

So the lesson here is, don't place spines in the direct paths. Place them behind the mineral line or on the outskirts of mining paths.

Yes they do, but at a minimal rate. The spine crawler will take away the shortest path possible for the drones to use. Just like in any other situation, the smallest amount of time from point A (mineral patch) to point B (hive) is a straight line. If you introduce something like a spine crawler that gets in the way, the shortest path is no longer available. This makes it so that the drones have to travel a longer path and take longer for you to gain resources.

17
Do early workers really have an exponential effect?
15
Why don't the pros kill the scouting probe as it passes through their mineral line?
11
How to deny Protoss observers effectively
13
How to counter marine rush as a protoss on maps with huge ramps like Scrap Station?
5
Why zerg taking a third to P's FFE or T's double Command Center is only an equilibrium?
3
How should Protoss respond to a Zerg expanding a lot?
10
How do zerg counters mines
3
How to make worker carry multiple resources?
7
Do workers 17-24 still provide additional minerals?