How to add Better dungeons to Feed the Beast [closed]

I copy and pasted the Better Dungeon mod into the minecraft folder, seems I am doing this horribly wrong since Minecraft crashes. Here is the crash report:

Googled how to do it but I can't find anything that deals with Better Dungeons specifically and i've even used edit mod pack from the FTB laucher.

The crash report explains itself right at the top:

Better Dungeons is trying to use the same block ID for its new mob spawner blocks as the wild beehives in Forestry. You have to fix that.

Unfortunately, Better Dungeons is one of those rare Forge mods that doesn't use a config file to assign its block IDs, which means the easy way of fixing this is not available to you, and that's something the author should fix. (Consider posting in the BD thread and requesting that block IDs be changeable in the config file for the 1.4.7 and later versions.)

You can reassign the block ID for Forestry beehives instead. However, be aware that some mods require their block IDs to be sequential, so changing a block ID for a big mod might force you to change many block IDs, or at least any that form a sequence of numbers. Fortunately for the case of the beehive, it's not part of a sequence of block IDs so it's safe to change. The other drawback of doing it this way is that it will make your new configuration incompatible with any existing worlds you've started, but if you're installing Better Dungeons, you're probably starting over in a new world anyway so you can get the new structures everywhere.

Note that Minecraft will crash as soon as it finds the first block conflict. Once you've fixed the beehive/spawner conflict, you'll probably see it crash again on another block conflict. You'll just keep doing this, fixing one conflict at a time, until it runs without that crash message.

As a semi-automated alternative, you might want to install the ID Resolver mod. It'll detect block conflicts and ask you what to do with them. It has buttons to assign the conflicting block to a new ID automatically, as well as a button to automatically reassign all IDs for a mod to new numbers. Note that this might not work for Better Dungeons, though – if it's not already using a config file for block IDs, it might have other coding errors that make it crash if the block IDs are changed. If that's the case, you'll be better off not using the resolver mod and just editing the other mods' config files by hand.

Alright before I answer this I wanna give 99% credit to SevenSidedDie as without him I wouldn't have been able to figure this out, although it did take some time to find this and the litte trial and error I did.

First Download BetterDungeons. Make sure you have WinRAR or a similar program that extracts files.

Go into your FTB folder, click on the modpack you loaded, for example I loaded the Ultimate Modpack so I clicked on the "Ultimate" Folder. Then click the "Minecraft" Folder. Here is where you will open the BetterDungeons file you loaded with WinRAR (or similar program). The first folder you will see is the folder titled "Copy the contents in this folder into your .minecraft folder", ignore the title as it does not apply, click on it. proceed to copy and paste the "Chocolate" folder into the "Minecraft" folder you should have previously opened. Now go back to the BetterDungeons folder, click on the "Mods" folder and copy and paste the "BetterDungeons.zip" file into your "Minecraft/mods" folder. Now that you have completed this launch your FTB Launcher, then launch your modpack.

Minecraft will crash, at this point close out of minecraft and go pack to your FTB Folder. Click on your Modpack folder just like before. Then click on the "Minecraft" folder. Proceed to the "Chocolate" folder. There should be a PROP File there now named "config" click on it and open it with Notepad. You should be able to see some text "blockID = 250" change this to "blockID = 1206". save the file and close out and launch your game it should now work. 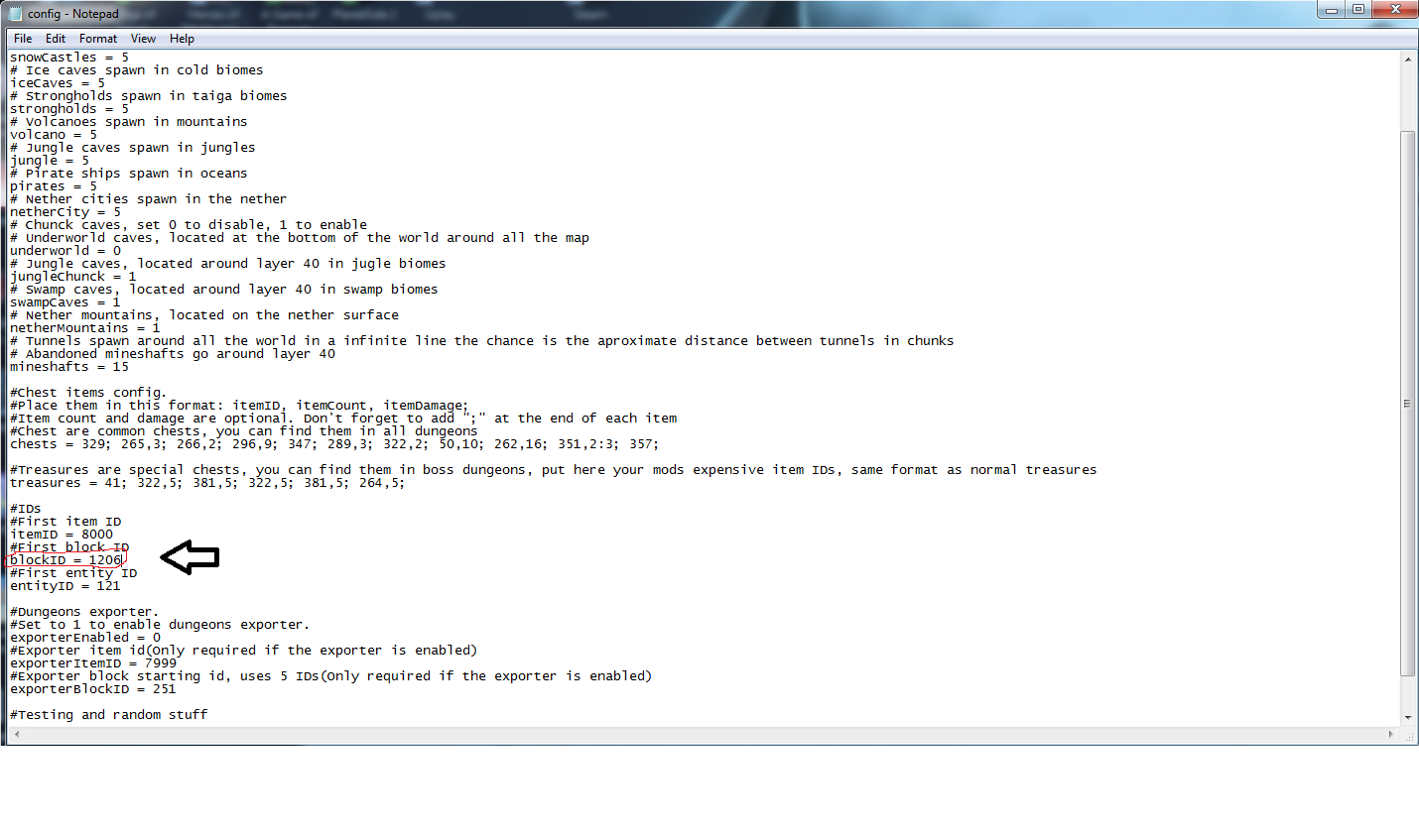 wow that picture is awful...