Unexpected Blast in Call of Duty 4

I'm playing Call of Duty 4: Modern Warfare, level No Fighting In The War Room. I read a lot of walkthroughs, but couldn't solve the problem.

First of all, you start as Soap MacTavish, with your teammates: Captain Price, SSgt Griggs, and Cpl Miller. The latter is is not mentioned in any walkthorugh I saw. He is a real coward, and engages in almost no fight. Despite this, he gets killed no matter how I try to save his life.

Anyway, I continued the level till I reached a corridor where crates blocked the road. There were two entries to my left and right, each leading to parallel side corridors. I entered each of them and killed every enemy. Oddly enough, neither Captain Price nor SSgt Griggs followed me.

After that, killing all enemies in side corridors, I took a path leading to the main corridor (bypassing the wooden crates which blocked the road). At the moment I set foot on the passage joining the side corridor to the main one, an alarm set off.

I sprinted to the main corridor, meeting Price & Griggs! They were running towards some giant door. No matter how fast I ran, just before entering the door, something exploded, and I was dead!

This explosion is not mentioned in any walkthrough. I think it might be related to Cpl Miller's death, but I'm not sure.

One thing you should always keep in mind with Call of Duty games is that the action sequences are completely scripted. Basically, what that means is the game will keep throwing enemies at you or will otherwise not progress the level until you initiate a specific action. In this case, you are faced with this corridor: 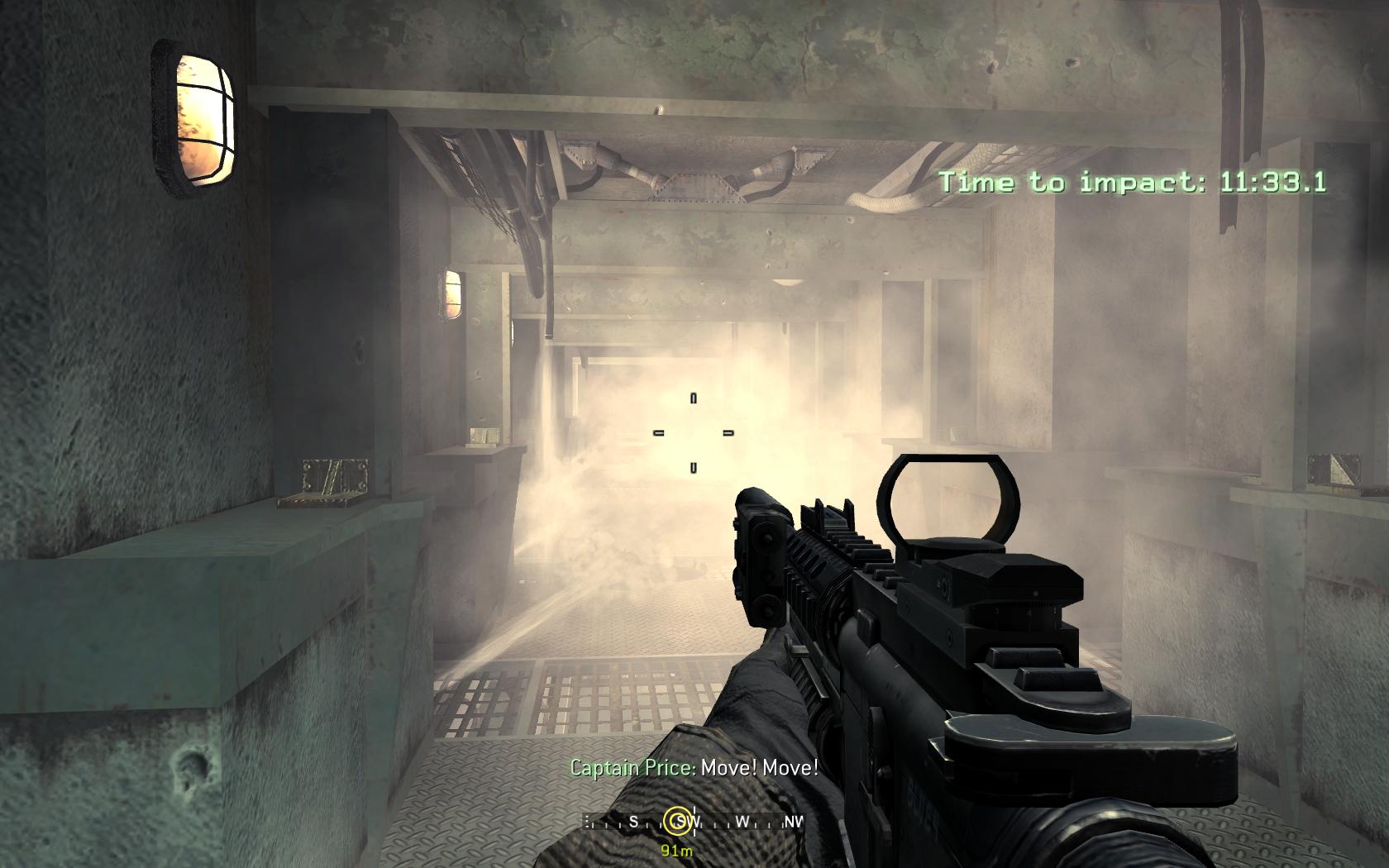 The corridor is filling up with flammable gas. Once you pass a specific point in this corridor, shortly after exiting one of the side corridors, Captain Price will say Go! Go! Go! This is your queue that the corridor will be detonated by the opposition. If you listen carefully, you can hear a countdown on the overhead speaker in Russian. You need to make a mad dash to the end of this corridor and exit it before Captain Price shuts the door. He will shout out Move! Move! right before he shuts the door.

I would suggest sprinting for this door as soon as you exit one of the side corridors and make it through the door before Captain Price shuts it, thus: 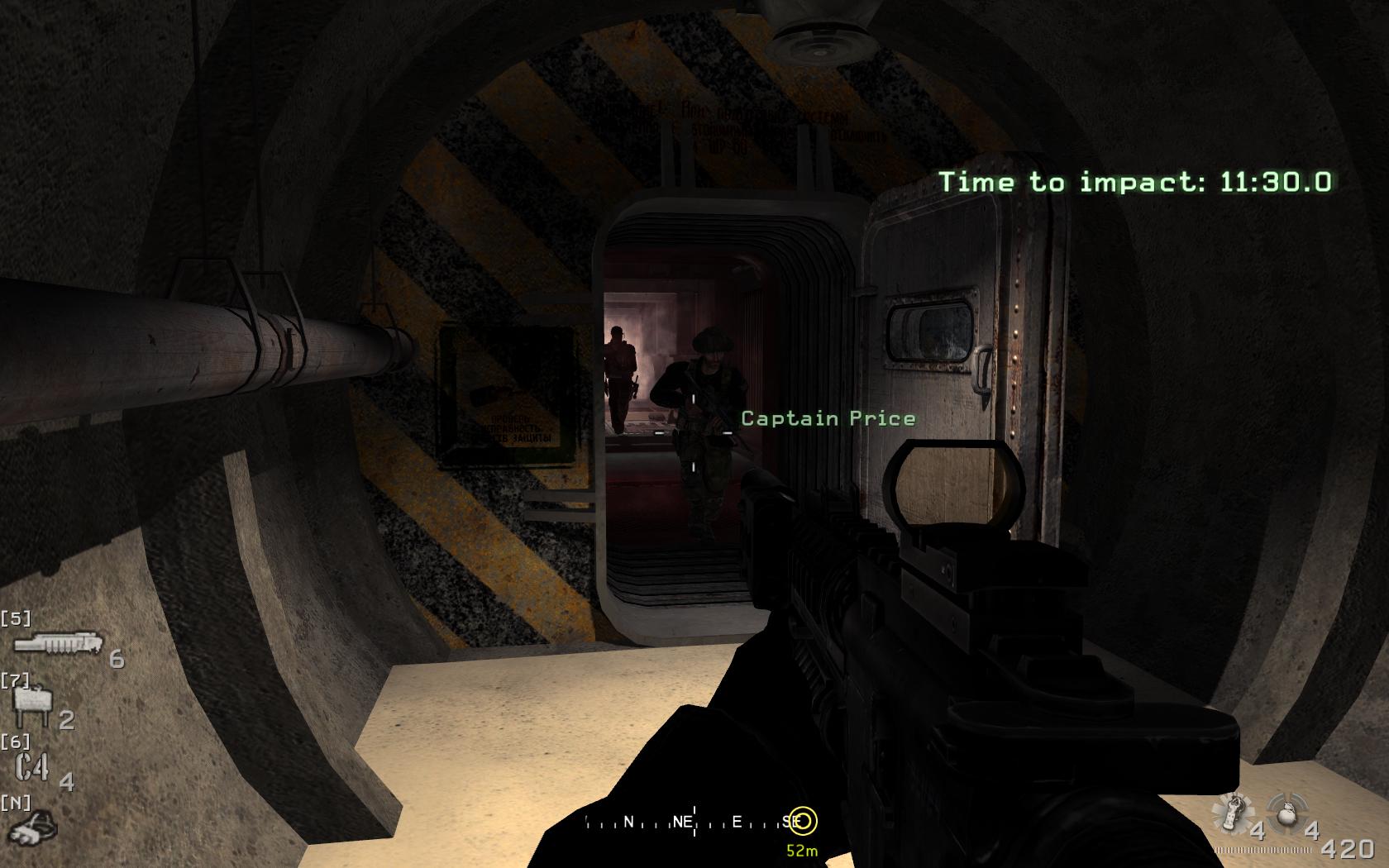 I know this is an old question, but as I can see, it has not been solved.

What you are describing is a simple case of bugged game. As mentioned in above answer, this game has no sandbox effect what so ever -- everything is scripted. And there are triggers, like everybody waits for you, while you wonder inside previously cleared room AND when you go near them -> past a trigger-point, then new objectives appear and everybody starts running..

In your case, this trigger is bugged.. You have to reinstall you game in this case. I normally know all the COD4 related glitches and cases, but this is something new..

Are you going through both the corridors? You only need to go through one. Once you see Price and the others run through the hall, follow them. Don't keep going straight to the next one.

Not the answer you're looking for? Browse other questions tagged call-of-duty-4-modern-warfare .