How can Elizabeth survive the plot twist?

If the baptised Booker (Comstock) is killed in the end, why don't all versions of Elizabeth/Ana disappear as opposed to all but one version remaining?

We see that all Elizabeths disappear. Except for one. She is the daughter of Booker. Booker is killed before he is baptized.

Given the plot twist explained above, how can she even exist?

"Your" Elizabeth is not present in the drowning scene. If you look closely, she is not wearing the necklace which you gave her at the beginning of the game. I quote here a good explanation which I came across on the 2k forums:

Elizabeth's fate is still rather up in the air. It's possible she exists within the probability space like the Luteces. As far as I understand it:

By the end of the game, the Elizabeth with whom we traveled was omniscient and quasi-omnipotent. It seems reasonable to conclude that she was able to remove herself from the Comstock timeline, to survive the erasure of the Columbia universe.

The ending is somewhat ambiguous in this regard:

As each note of the final song is playing, another Elizabeth fades away. The final note is accompanied by the entire screen turning to black - it's possible that at this point the final Elizabeth has disappeared as well. You can watch it here. Obviously - massive spoilers, so no one-boxing :)

However, practically all time travel and inter-dimensional travel science fiction stories have their fair share of issues:

How can Elizabeth even drown her own father before she was born? Doesn't drowning all the possible Booker/Comstocks mean that Elizabeth never existed in the first place? Then, who drowned him? Further, if there are infinitely many worlds, there's not a single one where Booker perhaps never had a daughter? There's a lot of hand waving about "constants" here that they use to get away with it, but it's still a bit silly.

I think that any story which includes these types of elements is highly likely to fall afoul of some type of similar paradoxical situation. (See also: Looper, Doctor Who, Back to the Future, etc)

I think all answers here are missing a key point, which is (in short): If Booker is never baptized, he never turns into Comstock, so Booker will never give up Anna to Comstock in return to erase his debts. As such, killing the Comstock timeline (by rejecting the baptism) also removes all Elizabeths. 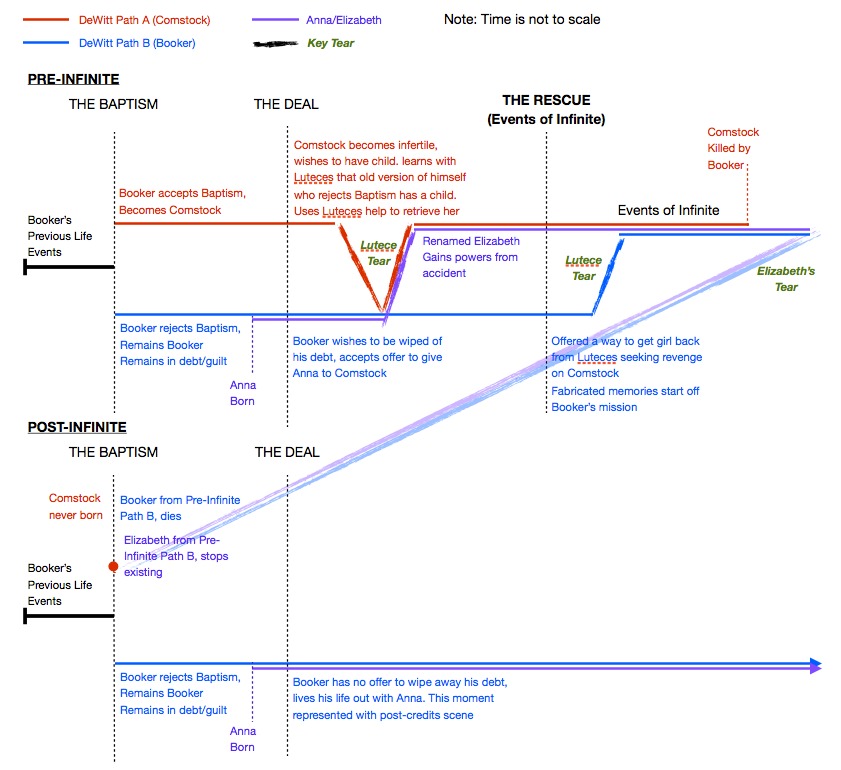 If you listen carefully during the ending, everytime an Elizabeth dissapears from a certain world, a piano key chimes, signalling the end of existence for that Elizabeth. Right after the camera fades to black, you hear one final "plink", indicating that the last Elizabeth ceases to exist, and everything in Bioshock Infinite never happens.

As such, your question isn't actually correct, because the "Elizabeth" that has powers all dissapear.

The Elizabeth you know disappears along with the other ones you see in the water. From that moment it will be one universe, with one Booker and one Anna. With the final decision all universes disappear and becomes one (post credits scene). Anna will never be sold and renamed Elizabeth; Comstock doesn't exist any more and neither does the Booker who is picked by the Luteces at the beginning of the game.

All this is possible because destroying the siphon and controlling Songbird with the song from the future Elizabeth breaks the loop of the universes.

That's why at the beginning the Luteces know you won't row the boat and they have a tally of 122 heads at the fair. The Booker you're playing is the 123rd and the only one that survives.

Without the events of the game if you bring Booker directly at the end he would become Comstock or would still be a desperate Booker. In order to break the loop the Luteces bring the 123rd Booker in the "game's universe", he creates his own memories for the different reality (message at the beginning of the game and explanation by Rosalind Lutece at the end), he succeeds in the rescue, he really wants to change, he breaks the loop and only after dying under these conditions the universe is restored.

"Your" Elizabeth still somehow survives at the end of infinite. The Elizabeth in Burial at Sea is "your" Elizabeth as she is still wearing the necklace that you gave her at the beginning of infinite. As it is said above, Elizabeth doesn't go into the final lighthouse with you. Instead the parallel Elizabeths are the ones that drown booker.

If you haven't played Burial at Sea, don't reveal the spoilers please.

One has to keep in mind that each choice made creates a new set of universes. This does not mean an either/or choice - as many universes/paths will diverge as there are options. Also, remember that each either/or choice always has not two, but actually three choices - there's the option to abstain from choosing. From there, choices explode (how was the choice bypassed? A clever line? An event? etc.).

It is also very worth noting that the only universes seemingly "erased" from existence were universes that dealt with Elisabeth being tortured/tormented in any way (thus giving her cause for correcting them). Other realities remain unaffected.

Of course, this can all be "waved away" by assuming that each subsequent choice is in fact - subsequent. As in, "you can change time, but you cannot change history". Consider: you eat a burger, you feel sick, you go back in time, you don't eat the burger. Time was changed, but history (cause - effect) still stands and chronicles what occured. You still didn't eat the burger because you felt sick after eating it previously - you didn't erase history by changing the past. (this theory is also known as the subjective timeflow theory)

This, of course, allows Elisabeth to continue existing. Her past torment is now gone, but she will still remember it.

(as she clearly does in Burial at Sea)

She didn't break the chain to stop herself from being tortured - she meant to void the entire phenomena set, so that it wouldn't perpetuate any further, and no more lives would be affected as hers was.

Of course, there's another massive hole in the plot - Burial at Sea itself, or how did Comstock escape to Rapture when all realities related to his existence at all were erased? But that's a different story altogether.

Some clever posts. However, all seem to be making the assumption that the baptism happened before Anna/Elizabeth was born. I don't think that's ever clearly stated in the game. Why couldn't it just have easily have been that Booker's ordeal at Wounded Knee caused him to become alienated from his wife (but in this story, the issue of his wife is a red herring)/become distraught, ensuing gambling issues, resulting in debt and left him unhinged enough to give his daughter away... At which point he hit "rock bottom" and found himself at the baptism?

This way the original Anna would continue to live. But because Booker never became Comstock, he would never set the plan in motion to take her away from Booker, spurring multiple timelines, and multiple Annas/Elizabeths. This might also explain how COmstock knew about the existence of Anna to begin with. And as mentioned already, of course there are always paradoxes with these types of plots.

Not the answer you're looking for? Browse other questions tagged bioshock-infinite .

4
How can Bioshock Infinite saves on the PC be backed up and restored?
30
How can Booker and Comstock meet?
1
How did Elizabeth lose her small finger?
6
Can you change the outcome of the game's ending?
4
How can I avoid the Handyman's ground pound?
21
How does Elizabeth getting various loot and then giving it to you work?
2
Is there a maximum limit on the amount of corpses I can pile up? How does it work and how can I remove/increase the limit?
12
How does the Tesla Coil work and how can I optimize its use against enemies?
0
Where can I get a candyfloss for Elizabeth?
11
When did Lady Comstock die?