How to find missing areas to explore?

While vistas, POIs, wps, hearts and skill points are listed and easily visible on the map, allowing a player to compare a fully explored map from the internet with his own map, this is not completely true for the concept of "areas", required for certain achievements split in Ascalon, Kryta, Maguuman and Shiverpeaks.

To get 100% map completion you don't need to explore every area, so it becomes hard to tell, in the end, which areas you missed while exploring.

What is then the faster way to see which areas are missing? Is it just a matter of looking manually for "blurs" in the map where you haven't been yet?

Bonus question: Will exploring different areas of the map with different characters on the same account add up in the achievement (like jumping puzzle, for example) or, like standard world completion, you have to explore them all with the same character?

I was in the same boat as you: I already got 100% world map completion but I was still missing explorable achievements for Kryta, Shiverpeaks and Maguuma. For me, these achievements were ~95% complete with only a couple of missing spots.

Thankfully wall-scrapping is not necessary, unlike in gw1. What I found really helpful for getting those last few missing spots was to use the gw2 wiki zone maps. Similar to Joetjah's suggestion, what you do is open one of the zone maps for the area you're missing and compare it with your ingame character's map. The gw2 wiki maps work very well for this purpose because:

For me a lot of the missed spots were small areas usually off in the corner of the map that's easy to overlook. One example, I was at 174/175 for Kryta explorer. After exhaustively checking all the Kryta maps, turns out the one spot I'm missing is in Bloodtide Coast. It's the little segment all the way on the upper left corner of the map shown below: 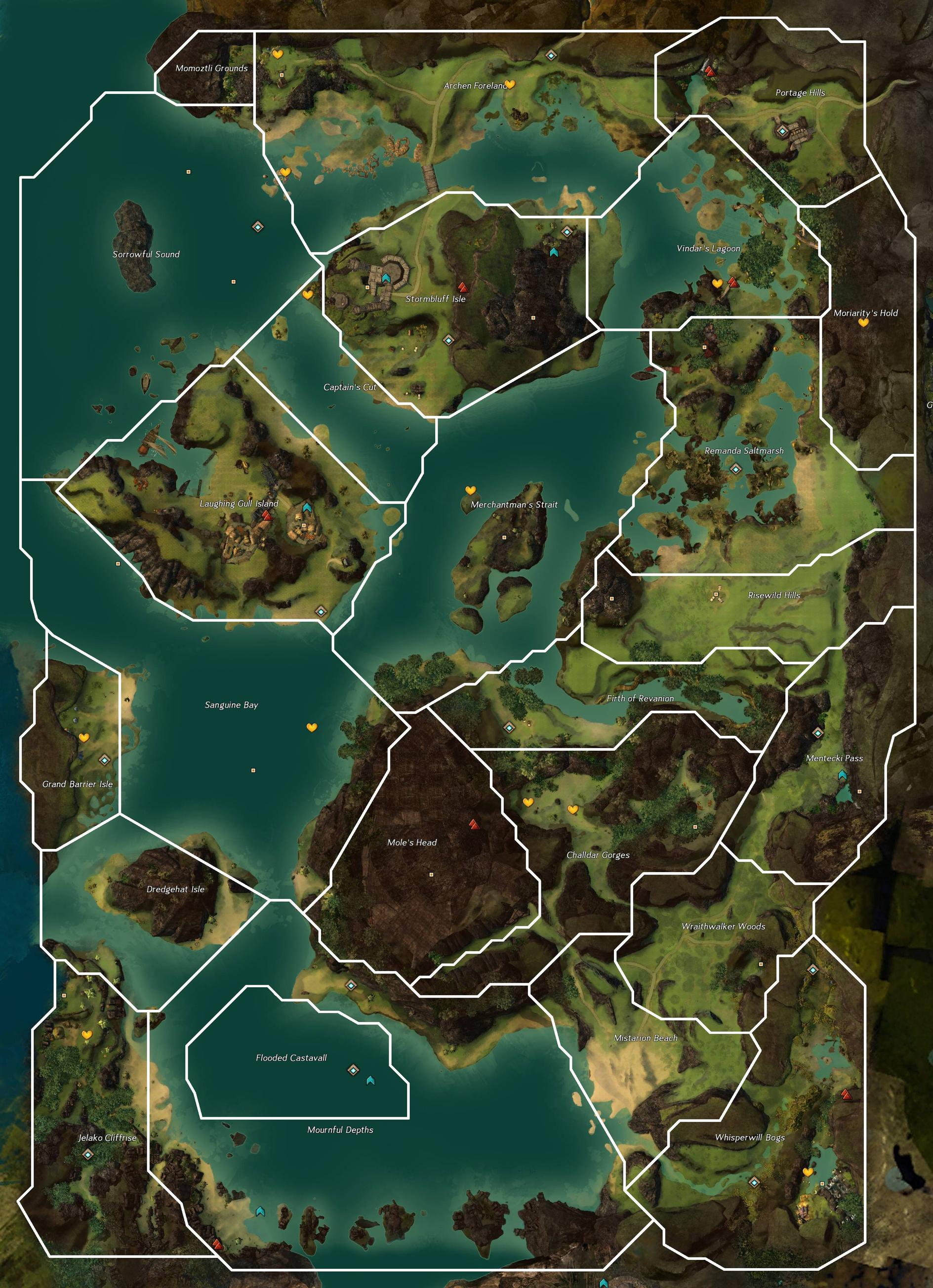 Using this method it didn't take me very long to identify and uncover the other areas I've missed.

To answer your bonus question, all explorable achievements are account-wide; you only need to discover an area once on any character for it to count towards the achievement.

OTOH, 100% world map completion is per-character specific -- you get rewarded at the end for each character that completes it. This is important because one of the reward item is needed to craft a legendary weapon.

When you press M to see the map, and scroll out a bit so you can see the name of the zone, you can hover your mouse over it to see how much % you've completed on that map. That way, you can see which maps you still need to complete your achievement.

When you are in the map, you can see how many Vista's, POI's, Waypoints, Hearth's and Skillpoint's you still need. There is no way to check ingame where the exact location is: I had a few missing Vista's and even Hearth's which I didn't see on the map and found later on a part of the map that wasn't even blurred.

A thing I tend to do to find those last missing points, is to compare the map with this. Just scroll over the parts of the map slowly and compare all the locations with your own map ingame. If you don't see them on your map, you've located your missing object!

If you want the full explorer achievement, you'll need to discover all 25 explorable zones except Southsun Cove. A zone can contain area's. Discovering areas in the zone is not required, and it's possible to have a map completion chest before visiting all areas.

The only reliable way I know is to wall scrape, as you did in Guild Wars. As far as I know there is no method to work out which zones in the achievements you are missing.

You can also zoom out the world map just until the watercolour style overlays, then you can start to see which parts of the map are showing a brushed area, and which are clear. From this it's quite easy to see where the sharp contours of the edges go into these blurry/watercoloured/brushes areas. Hold ALT and LMB to pop a waypoint on it and then you're all set to go exploring.

4
How do I find Troll Salve?
0
Where to find a Juvenile Shark?
20
How does Magic Find work in Guild Wars 2?
3
Do you get WvW Bonuses while in overflow maps?
3
Where to find a Juvenile Wolf?
5
Find missing points
4
Explore Mad King's world after act III
7
Does party size influence magic find percentage?
4
What are the consequences of leveling in lower level areas?
2
What's the second area to explore in Brigantine Isles?