How do I make Talvas Fathyron stock up his merchant inventory?

Whenever I try to buy something from Talvas Fathryon, he shows me that he has absolutely nothing to sell: 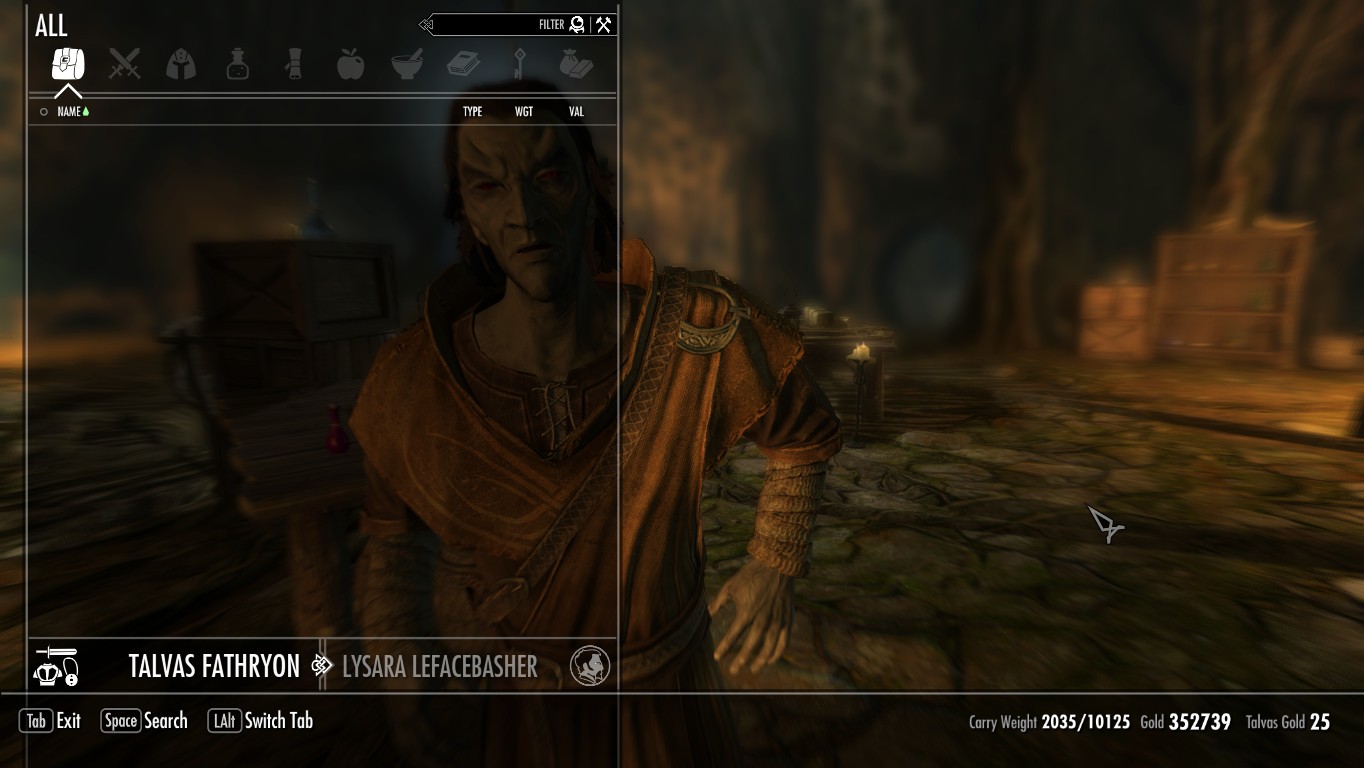 This happened after I told Talvas to part ways with me (leave as a follower), and when I visited him at the Tel Mithryn Tower. I'm pretty sure that it's been more than 48 hours (so his merchant inventory should have reset by now), and I also don't recall buying out all his items (so he still should have a few items in his inventory). I have previously hired Talvas as a follower and remember viewing his non-empty merchant inventory before.

I would like to buy stuff from him as the "Talvas Fathryon" UESP wiki article states that "Talvas' store contains an extensive collection of standard Skyrim Destruction and Conjuration spell tomes, as well as tomes for additional spells added by the Dragonborn DLC".

The notes of the "Talvas Fathryon" UESP wiki article state that: "if you hire Talvas as your steward, his trade inventory will become inaccessible". However, I have not hired him as a steward.

I am playing on the PC and with mods (mod list here).

How do I make Talvas sell stuff again?

As quoted from the Skyrim Wikia page on Talvas Fathryon:

Talvas may stop selling goods including spell tomes. Cause unknown but may have to do with using him as a follower. This makes any spells that can only be bought from Talvas unobtainable. This can never be resolved on consoles making it impossible to buy his unique spell tomes.

This implies that if you are playing on the PC you can obviously gain these items via console commands.

The Talvas Fathryon Talk Page over at the Unofficial Elder Scrolls Pages has the following little tidbit by the user MadAndyD:

Though Talvas fulfills all these roles, he seems to do a poor job of multitasking. He only trains and sells whilst in the proximity of Tel Mithryn, but, it seems that even when in the proximity of Tel Mithryn, as a follower he cannot sell, with the relevant window instead showing his inventory, as if you were to trade with him. However, dismissing him did not seem to instantly fix his merchant screen, nor did waiting for his stock to reset, I was only able to fix this by recruiting another follower altogether, and then visiting him.

Give it a try.

Not the answer you're looking for? Browse other questions tagged the-elder-scrolls-v-skyrim skyrim-dragonborn or ask your own question.

62
What merchant has the most gold?
2
Can you only make an 'Investment' in one merchant total?
4
How can I reset the inventory of a merchant via console?
25
The Aspect of Peryite came out of nowhere and insisted on talking with my character.. forever - How do I stop him?
4
Does the Sapphire Dragon Claw stay in the inventory of the Merchant I sold it to permanently?
6
What level do i have to be to get Daedric items from the Dremora merchant?
2
Where can I find Neloth's apprentice?
8
What's the formula for merchant price?
3
How is the merchant spending cap determined?
5
Where is Majni's merchant chest?