Why won't this ocelot do anything but breed?

I have several raw fish and have been trying to tame an ocelot. However, every time I get it to approach and feed it a fish, it simply wants to breed. I am playing on SMP, and have tried logging in/out to see if maybe the texture just didn't change, but it appears the ocelot is simply un-tamed. The wiki confirms that this should tame the ocelot.

Is this a bug or a change? How can I tame this ocelot?

Here is a screenshot of my second attempt. This time, unlike last, clicking with the fish caused the ocelot to also flee. I am not sure if this is the same ocelot or not. 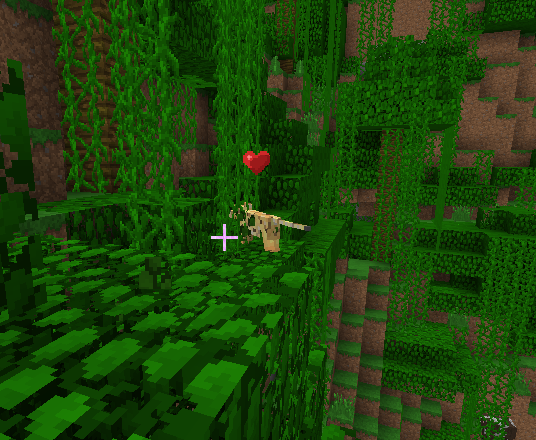 According to Minecraft Wiki > Ocelot#Taming:

If Right-clicked and nothing happens, then:

And in Minecraft Wiki > Ocelot#Trivia:

If you fail to tame an ocelot, it will still show heart particles. Dinnerbone states that it was because they like you for giving them fish, but still want more. Studying the game shows that they are actually going into breeding mode, and if there are two such ocelots in the area they will spawn a baby.

So, it is true that ocelots will want to breed. To really tame it, you shall keep on giving it fish until it is finally tamed and turns into a cat. Also, prevent moving or rotating the camera too quickly. If it is not accepting fish, it may be frightened or it is too far from you (see above).

In the screenshot you provided, it seems that the ocelot is more than 5 blocks away from you. This might be the cause of it not accepting more fish from you (since you can't give it fish when it is too far away). Also, it looks like being frightened by you. If you have moved or rotated the camera, that would explain.

Keep using fish. The fish are used for both breeding and taming, but it takes a few fish to successfully tame one. After a few fish, you should have a tamed ocelot.

In one of the most recent updates ocelots will no longer become cats and be tamed. You can find stray cats in the wild or tame cats that randomly spawn in villages but sadly ocelots will only breed if you give them fish.

This is for the PS4 version, but how I did it was holding a raw fish while in sneak mode, then waited for the cat to come. Once it was close to me, I pressed the left trigger. Black particles came from the cat the first few fish I fed it, then an eruption of red hearts, BAM! Cat. Mine was siamese.

What you have to do is put it in an area that it cant escape from. It has to be large. For me, it took steaks or fish, but after you feed it in survival (not creative. It won't work if it's on creative). I don't know why but it only works in survival. After a while, it will turn into a cat. Also, the cat gives fish back when the hearts appeared. I don't know why that happened, but it happened to me too.

I already give up, it’s so hard to do it. I tried in survival and creative but both didn’t work, they only go into breeding mode afterwards

1
Why Won't This Sugarcane Grow?
14
Why won't my villagers breed
2
Why won't my minecraft horses breed?
0
On the new minecraft it wont allow me to tame an ocelot they aren't even afraid of me is it a bug or what?
2
1.13 Turtles won't breed
6
Why won't my turtles breed?