What can I do about piracy?

Help! My games are being pirated! People are choosing to get copies of my material illegally rather than giving me large sums of money instead! I seem to be given the option to "Warn Them" or "Sue Them": 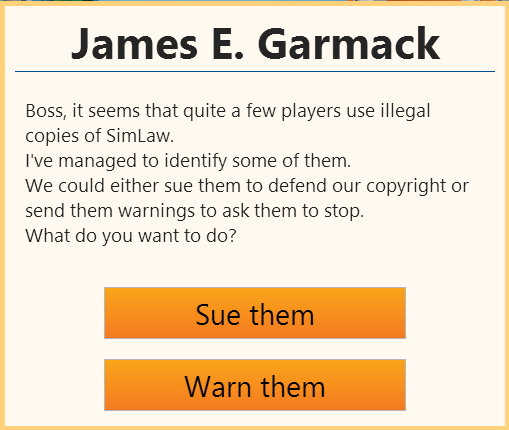 What are the repercussions of each of these actions? Will they affect the number of fans I have or my company's reputation? Will this actually increase the number of games sold? What can I do about piracy?

When you're prompted to deal with your pirates, you're given two options - warn them or sue them.

If you choose to warn your pirates, your fans will respond positively to the fact you didn't launch all out war against gamers pirating your game. You'll be presented with a brief bit of story about how piracy is rife within the games industry and that many developers are taking gamers to court over it, while others are taking a more relaxed approach to the issue. You will get some positive feedback from them and also gain some additional fans.

If you choose to sue your pirates, you'll get a backlash from your fans, who will be unhappy about you being heavy handed over the situation. You will lose a lot of fans as a result of your actions, but gain some money back in legal claims;

If you are not given two options like in the screenshot on the question, but instead receive a screenshot like below, then you're actually a real life pirate who stole the game instead of buying it; 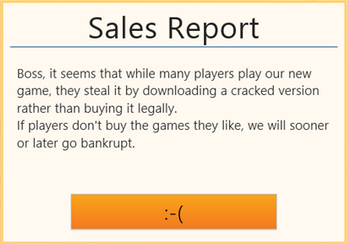 Perhaps you should consider buying the game rather than downloading it illegally!

8
Should I let fans of my game continue developing a fan game or not?

3
How can I improve my ratings?
10
What are great combinations for games?
8
How can I fix bugs that become apparent post release?
4
What are the effects of overworking or overloading an employee?
6
What are the requirements to unlock “License Game Engines” research?
12
Can I ever go back to making smaller games?
4
What effect does improving staff stats have?
2
How can I update my game?
4
What are the easter eggs In Game Dev Tycoon?