How do I set up a Cow Grinder in Minecraft?

So I'm playing on a server that lets you purchase cow spawners for a whole lot of money. I wanted to make a sort of cow collecter, like a half of a mob grinder just so I can hit them with a sword without having to move.

The obsidian is to deter tnting.

My question is, why won't it spawn cows? It spawned three so far before I added water, but all in the exact same place on the far corner in the picture on top of that grass block.

Anybody know how to make this thing work? Do I need to take the water out and run around after these things manually? Or take out the lights?

EDIT: I raised the grass up one level and got rid of the water, and that made them spawn. I'm still looking into a way to collect them all somewhere so I can afk and then smack them around from time to time. I'm going to try water on top of signs over the field and see if that still lets them spawn.

Cows only spawn on grass, even if they're coming from a mob spawner. You need to surround the spawner with a nice 9x9 field to get maximum output. If you still want water you'll have to elevate the streams on signs so that it will still push cows but the grass doesn't decay to dirt.

I scienced up some cow spawners to demonstrate this, and to test whether water streams were a viable transport method. You can see the initial results here: 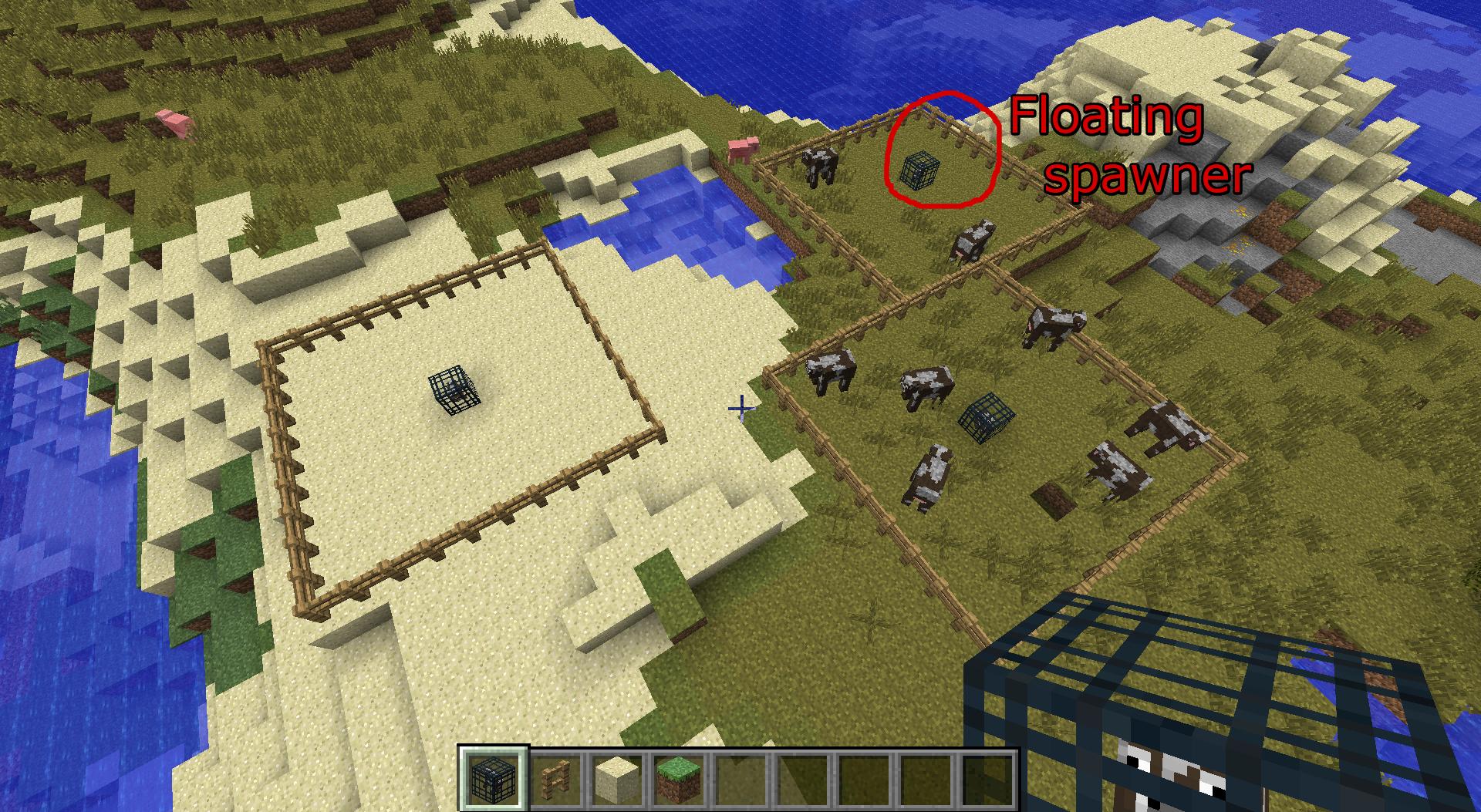 As you can see, both the spawners on grass spawn cows, but the one on sand to the left has spawned no cows, despite being created first. Note that the top-right spawner is floating 1 block in the air and it's spawning cows just fine.

Apart from the need for grass and light, the normal spawner-block rules apply:

Testing showed that cows need two vertical transparent, non-fluid blocks above a grass block in order for it to be a legal spawn location. You have have the spanwer entirely enclosed an even dark, and cows will spawn so long as there is a two-block height clearance they can fit in. For whatever reason, fluids are the exception, so flows are hard to use for collection.

Dan Rasmussen's idea to use a piston to release water flows on a timer does work, and is more efficient than waiting for cows to fall into a water-flow moat. A long timer is necessary though, since if the grass is covered in water when the spawner "puffs", there will be no cow and that spawn opportunity is wasted. The tick also has to be long enough to shuttled any cows to your collection pit. 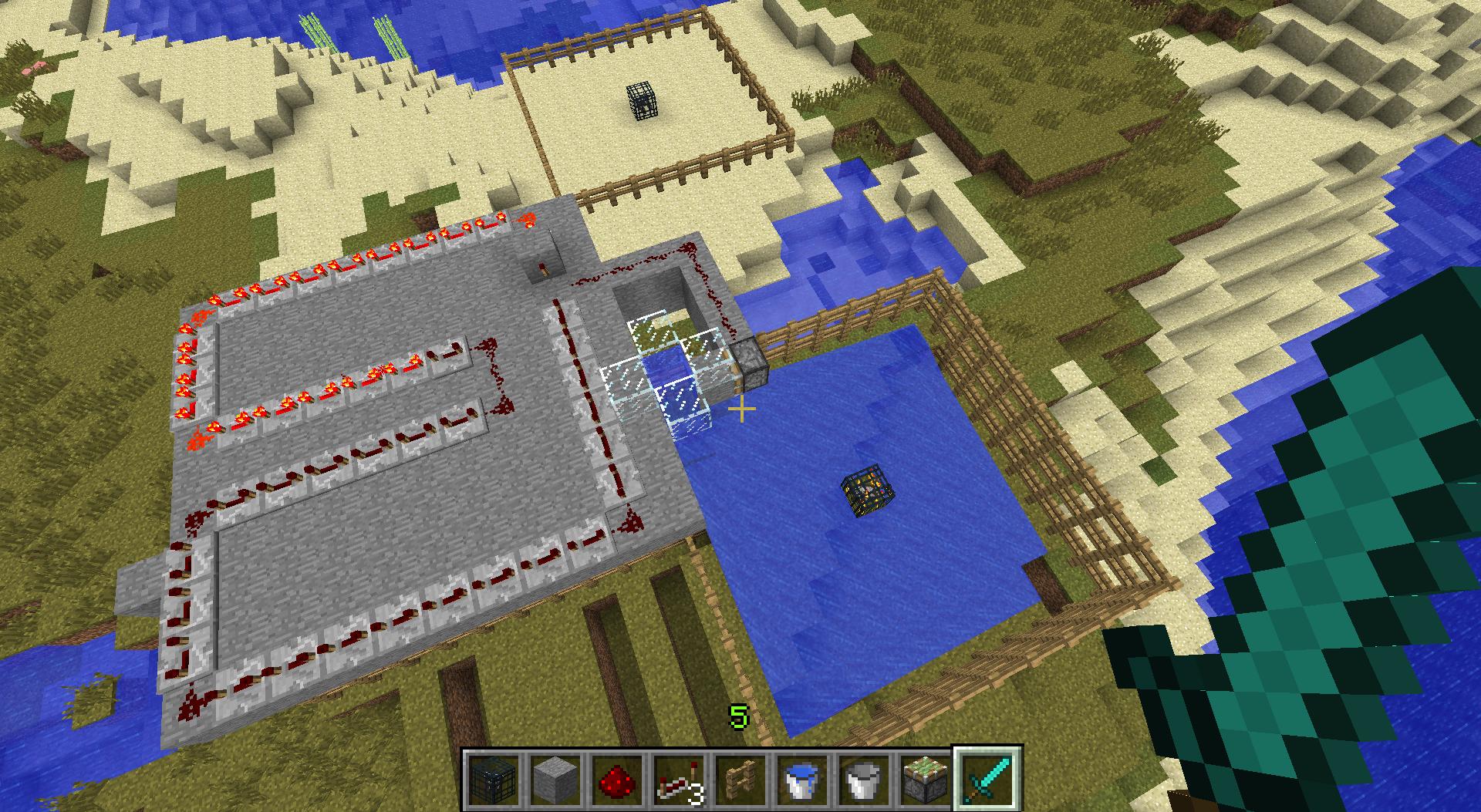 You'll notice I've made the grass paddock stepped – this is to allow the flow from one source block to continue all the way to the far corner. You can try different designs with multiple source blocks, or simply make the paddock smaller. The bottom-right of that picture is the collection pit.

The pit itself only has to be 10 blocks below the spawner to get the cows far enough away. 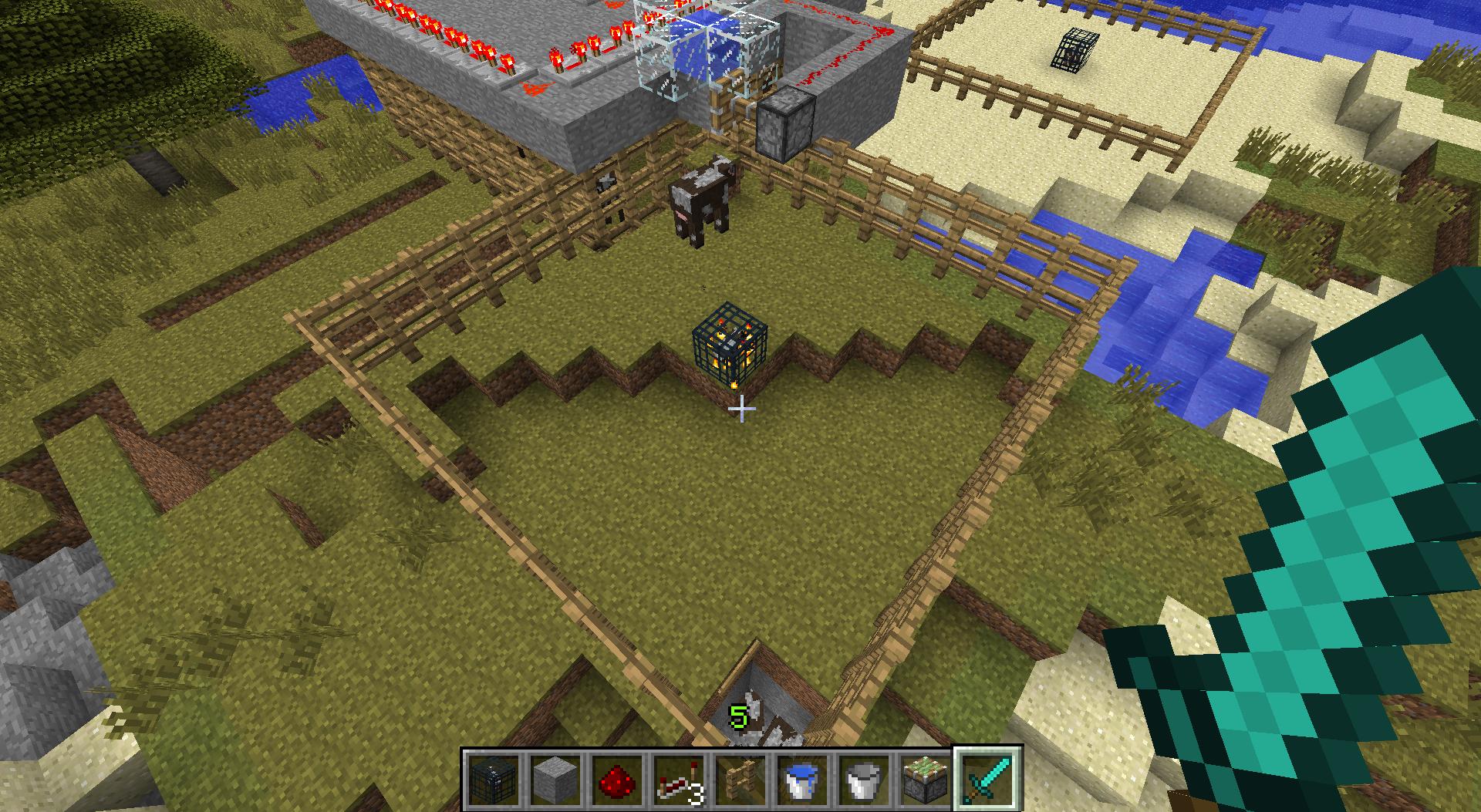 As a drop collection, they also take enough damage at 11 blocks to be one-hit kills. This design doesn't allow fast continuous spawning, but it's fast enough that you get cows faster than by breeding them, and with no effort apart from sitting AFK. I was getting a cow every five seconds or so with this design. Using an asymmetrical timer (so that the dry period is long enough to spawn all six cows, but the wet period is only long enough to push them all into the pit) might increase efficiency at the cost of complexity.

You can set up something like, you put two grass blocks with pressure plates on them and the cows will still spawn on the pixels of grass that are left, like the pressure plates up to Pistons a block higher and it will push the cow down.

8
How can I modify my grinder to harvest endermen?
15
Can cows starve to death?
4
XP Grinder Optimization
3
How to create a floating layer of signs that lets eggs through in a chicken coop?
4
Mob grinder does not spawn more than 63 mobs
2
How to force all spawner mobs to spawn on one platform?
4
Best way (mathematically/scientifically proven) to arrange spawners in Minecraft?
1
No Mobs Spawning in Mob Grinder
2
Minecraft: If you only want mobs to spawn from y = 63 and above, what is the optimal y level in the sky to AFK at?