Can you set a queue for games being installing on Steam?

So, I just bought a bunch of games on Steam. Of course, none of them are installed.

Steam, by default, installs one game at a time. If there is a game not being installed, it will eventually be according to where it's position in the install queue is. Next to those games, while showed in a yellow color, is the text "Update Suspended". Why they call it Suspended? Beats me because they have definitely not been installed.

So, out of all these games being installed, some of them I like more than others, so I want to install them first.

Is there anyway to change the queue order of games being installed?

No, there is no way to queue it at the moment, but Steam has it's pipeline for downloading changed over the last year and only like 100 Games are left with the old content system at the moment.

Once this is completly done, more features will come out on Steam that give you more control over your downloads. The current Steam Beta contains a download speed limiter for example. 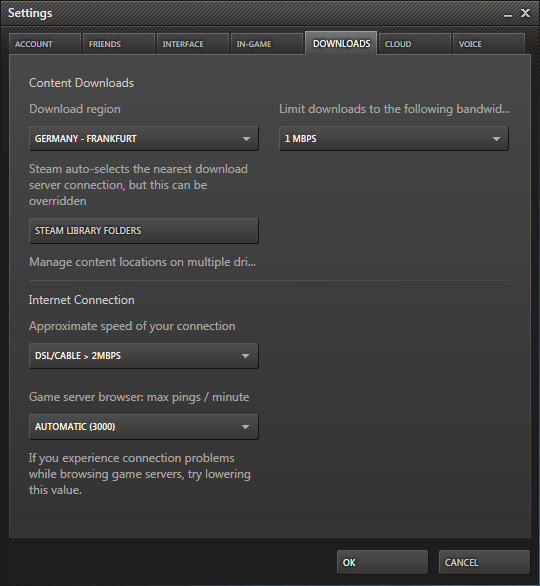 12
Is it possible to queue multiple Steam games for installation in one action?
15
Do I have to use Steam for games I bought on disc?
4
Why my Borderlands is not integrating correctly with Steam?
3
Steam won't allow Black Ops 2 to be downloaded/installed to a separate drive
7
What is the ideal setup for multiple Steam accounts on one computer, including guests?
4
How can i install and play games that require Steam without installing Steam?
4
Can you see a history of games from your Steam discovery queue?
4
Set same steam launch options for all games?
5
Can Steam Discovery Queue be fixed?
7
Play Steam game on different Windows user (Without logging in)