If you mean the Developper's Computer, it is a tab that is unlocked by beating the Developper, the final boss of the game. There will be a Computer tab along with the Candy Box, Inventory etc tabs. It lets you buy "cheats" with lollipops, most of which have random effects on random parts of gameplay: 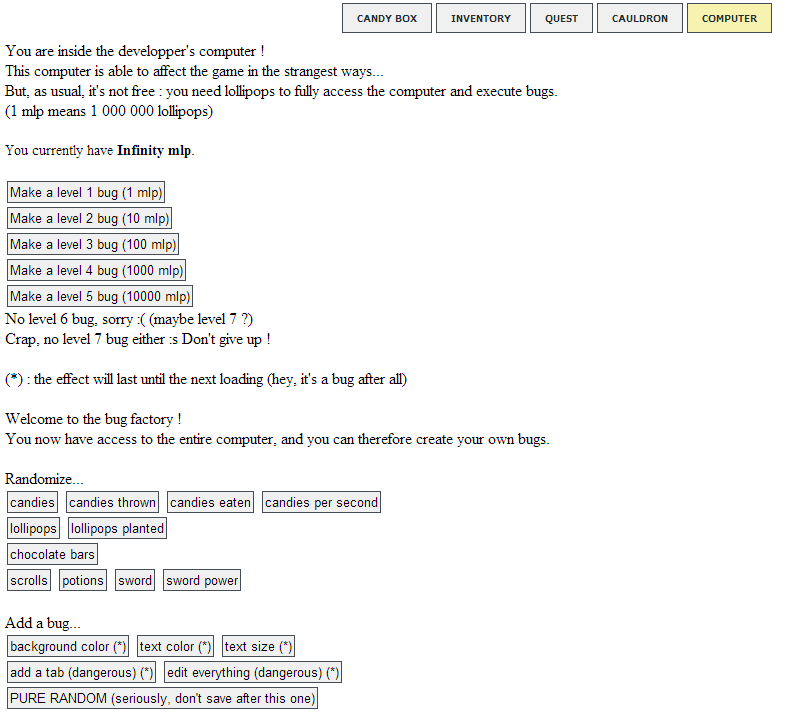 Save before you do just about anything in the Developper's computer as everything costs millions of lollipops and many things have no effects, cosmetic effects only or * negative* effects. Some bugs will however be beneficial or gamebreakingly amazing (the Sword of Randomness kills almost anything, including Yourself, in one hit)

If you mean the developer's console which is part of the browser, which many cheats use, this isn't actually part of the game as it were, it's a browser feature. But F12 will bring it up in IE and Chrome, Ctrl+Shift+K will open it in Firefox.

Not the answer you're looking for? Browse other questions tagged candy-box or ask your own question.

3
How do I enter cheats using the Javascript / Developer console?

16
What's the special key to defeat the Developper?
10
How do I get over the developper's moat?
6
How does the candy merchant's lollipop stock work?
5
What happens when I click 'Don't Click'?
6
How does the magician's hat enhance magic?
9
How do I survive the Developper's garden?
8
How do you annoy the candy merchant?
1
Computer Level 2 Bug Question
1
How do I access the original Candy Box game?