After a reasonable hiatus from Blizzard games, I have decided to reinstall Diablo 3. I used to have it installed and working on this machine and removed my previous install using Add/Remove Programs. However, now when I try to reinstall the game, the Diablo 3 Setup starts 'Updating setup files...' and then hangs; 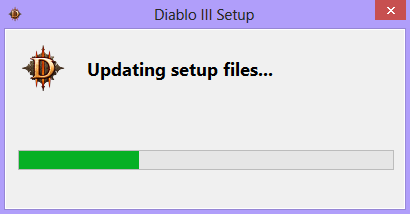 I have had a quick google for ideas on how to fix it which seems to bring up a bunch of posts when the server loads were really high last year, nevertheless I have been through the list of suggestions, making sure that secondary login is enabled, running the installer as administrator, etc.

After leaving the installer for ~30 minutes, it finally brings up an error stating it could not run the Blizzard agent; 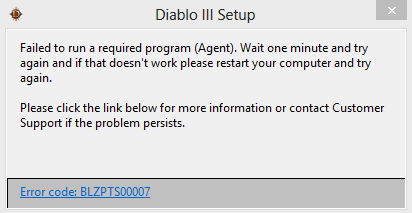 This gives me an error code - BLZPTS00007 - which gives me a few more google hits including a seemingly official guide on how to troubleshoot agent issues on Battle.net, however performing the steps listed under 'Advanced Troubleshooting' still hasn't resolved my problem.

How can I get past "Updating setup files..." when reinstalling Diablo 3, and what is error BLZPTS0007?

I disabled "work offline" by unchecking "Work Offline" in the file menu (available by pressing the ALT key in newer versions of Windows/Internet Explorer); 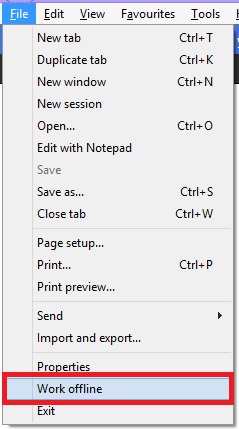 Once this option was disabled, everything worked first time.

10
My Blizzard downloader is stuck
2
Stuck on "Checking for updates..." when installing World of Warcraft?

7
Does the Diablo 3 public beta share files/resources with the retail download?
1
How to extract audio files from Diablo 3 installation?
2
Why is Diablo 3 installing slowly on SSD, no installing on drives A: and B:?
12
What goes missing when changing your quest in Diablo 3?
7
Diablo III Patch not installing automatically
2
No damage to my hero after installing Diablo 3 Reaper of souls