Does throwing Krieg the Psycho's axe when Buzz Axe Rampaging count as melee?

A lot of Krieg the Psycho's skills (especially in the Mania tree) allow him to deal bonus melee damage. I am wondering if skills that increase melee damage affect the Buzz Axe Rampage action skill when the axe is thrown (hold right-click, then left-click, by default on the PC).

Also, what about items? Will Maylay Shields still deal bonus 'Roid Damage' when the axe is thrown? Will Strength Relics and Class Mods that increase melee damage affect thrown axes?

The Borderlands wiki states that:

Critical hits in melee inflict ×2 damage. Weapon or skill critical hit bonuses do not increase this any further.

What if I have the Buzz Axe Bombardier skill (Bloodlust skill tree)? It's described as:

When thrown, your Buzz Axe now has dynamite attached to it which explodes on impact. 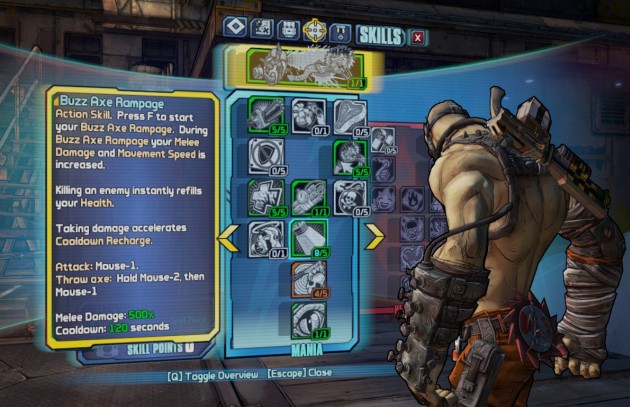 EDIT: Two of the current answers: [1], [2] conflict on how much damage the thrown buzz axe does compared to a melee'd buzz axe attack. Can anyone clarify?

yes it does... you'll notice when speccing into skills like "Silence the Voices" a thrown axe does the same amount of damage as a melee swing.

Buzz axe always deals 60% of the melee damage. That's just the cost of it being ranged. If it wouldn't be lower it would be considered op since you could oneshot enemies at extreme range if you could aim properly.

In the mission, Bad Hair Day (which requires you to do a melee attack), you won't be receiving the item if you deliver the killing blow by throwing the buzz axe.

In the 'Tina Tiny Assault on Dragon Keep' DLC mission, 'A Role-Playing Game', where you are required to punch someone (deliver a melee attack), it won't register as a melee attack if you throw the buzz axe.

If you're using the Love Thumper shield (description: when shield is depleted, in addition to normal Roid bonus the shield also causes an explosive nova every time the user connects with a melee attack), you'll release a nova when throwing the buzz axe. It'll still come from your character, not the buzz axe itself.

If you have the Buzz Axe Bombardier skill (description: when thrown, your buzz axe now has Dynamite attached to it which explodes on impact) from the Bloodlust skill tree:

Critical hit damage affects the thrown buzz axe like on guns, not like a melee attack. In general (not considering the explosive damage bonus from the Buzz Axe Bombardier skill) you'll deal two times the damage when you crit but the 'Pain is Power' skill lowers the damage.*

6
Do critical hit bonuses from the Sniping tree apply to melee attacks?
6
Does the Mechromancer's 'Electrical Burn' skill also cause burn damage effects from other skill-based shock/electrocute status damage effects?
5
Do skills or items that increase fire rate also affect melee attack speed? (e.g. Krieg the Psycho's Buzz Axe Rampage)
1
How does Krieg the Psycho's 'Salt the Wound' skill add stacks?
1
Where can I download Krieg The Psycho?
3
What aspects of Vault Hunters scale with Overpower Levels?
3
How do you do Krieg the Psycho's invincibility glitch?
4
Does splash damage count as grenade damage (to skills)?
6
Is the video 'Krieg: A Meat Bicycle Built For Two' an official part of the Borderlands Lore/Continuity?