What types of weapons or ammunition won't work with the Siren's Chain Reaction skill?

Maya / the Siren's Chain Reaction skill under the Cataclysm skill tree is described as:

While you have an enemy Phaselocked all of your shots that hit enemies have a chance to ricochet and hit another nearby enemy. Chain Reaction only works with bullets.

What are considered "bullets" by the game?

Which other weapons or ammo types won't work with Chain Reaction (or will work weirdly with it)? 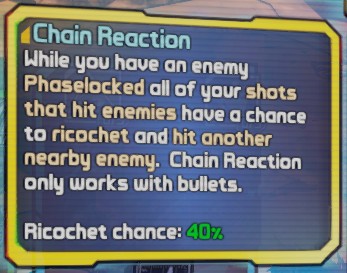 Orc JMR is pretty much correct; anything that isn't a gyrojet, rocket or e-tech gun will probably ricochet. Shotgun shot counts as "bullets" for the skill (and at least one pellet will almost always ricochet due to the amount of pellets). Elemental shots still ricochet.

Note that not all explosive elemental shots are "gyrojets", as mentioned in that question any explosive gun that shoots "bullets" can cause critical damage and can also ricochet. Torgue shotguns, pistols, some assault rifles and all spiniguns can ricochet. Rocket launchers, grenade launchers, and "torpedo" assault rifles all don't ricochet.

In testing I was unable to get e-tech projectiles to ricochet, which interestingly means that Gaige's Close Enough seems to use a different method of applying ricochet; best I can recall her skill DOES ricochet non-AOE e-tech bullets.

Note that it's never the "ammunition" that's the problem; it's the type of gun. All ammo types (except for Rocket Launcher ammo, because they're always explosives not bullets) can count as bullets, but not all subtypes of a certain gun always fire what counts as "bullets" (mostly due to e-tech and lobbed explosives/gyrojets).

Did some searching and it appears that the following will work with Chain Reaction:

4
Which explosive guns can cause critical hits?

35
What do the “red text” properties on weapons mean?
6
What area of effect does the Siren skill Ruin have?
8
What are the restrictions on assigning skill points?
3
What are the possible varieties of E-Tech weapons?
6
What are the max skill points Class Mods can grant?
3
How does The Bee work on multi-projectile weapons?
4
How does the skill Laser Sight work?
9
How do the Shadow of the Seraphs relic and the Assassin / Zero's 'Two Fang' skill work with 'burst fire' weapons and each other?
4
How does the Gunzerker / Salvador's Just Got Real skill work?
6
What feedback is given other players when I insta-res them with the Siren's Phaselock?