Why is Steam saying my friends are playing Hello Kitty: Island Adventure when I know they aren't?

I frequently see that my friends on Steam are playing Hello Kitty: Island Adventure. I know that this is not accurate. Why is Steam reporting that they're playing a game that isn't on Steam? Is Steam lying?

As Gnoupi said, it's possible to report any game you want to play as a non-Steam game.

In this case, it's a joke reference to the episode "Make Love, Not Warcraft" of South Park, in which Butters prefers Hello Kitty Island Adventure over World of Warcraft.

As far as I know no such game exists.

By the way, there's a similar exploit where it is possible to show yourself playing a game which you have pre-loaded, but is not yet released, by using a utility that reports the AppID to Steam. This means you can't even trust the regular in-game titles either. I've been known to "play" Left 4 Dead 2 and Portal 2 prior to its release.

You can make Steam say you're playing anything. All you have to do is add a non-Steam game shortcut and rename it. I heard about a fantastic April Fool's prank where someone did this and named the shortcut "Half-Life 2: Episode Three." All of his friends freaked out! Pretty classic.

To add a non-Steam game to your games library, select Add Game at the bottom left of Steam and select the corresponding menu item: 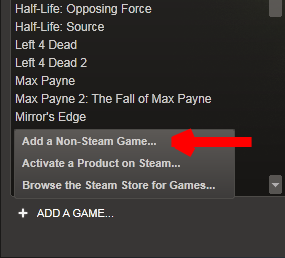 Steam is not lying on such reporting, for games in their library.

It is possible to be shown as playing just about anything, since you can add a third party game to your game list, and give it the name you want. It will be written as "In a non-steam game" under, though.

Since there is no "hello kitty" game in the Steam store, I assume that this is what is done there.

You can hook up games (or really anything) in your Steam UI. In fact, as a joke, I made it so that when I am programming it will say "Melanie Shebel is now playing Vim."

As others have said, it is possible to add any game to steam and rename it to whatever you want.

It is also possible to fake that you are playing games that aren't yet released by changing the App id in the config files. So, if you see that your friend is playing example brink before it's released, it is faked. This method also counts time towards the game.

49
What advantages are there to adding a non-Steam game to Steam?
7
How to remove all non-steam games from games library
6
Can I appear to be playing a Steam game without actually playing it?

18
On Steam, how can I see who a friend is on Facebook after they've been linked?
10
Why does Steam keep validating files?
38
Do the Steam ToS allow a single person to have 2 Steam accounts?
32
Is there a way to disable showing what your friends are playing when first logging into steam?
4
How does blocking all communications work?
0
How to stop Steam from automatically running in background
1
Are tags you add yourself in Steam public or private?