How to decide whether an attribute scales well with certain skills?

Reading several guides and build regarding Guildwars 2 characters I often come across mentioning of attributes that scale well or not so well with certain skills. For example, power, supposedly, scales badly with the Necromancer's scepter skills. It is therefore advised to take precision with scepter because it scales better.

What I've come to understand is that skills use a certain formula according to attributes to come to their final damage output, and based on this formula some attribute contribute better than others.

I would like to know how to decide which attributes scale best with an arbitrary set of skills for any given class. Is there a way to figure this out rather than applying empirical testing?

The main strategy for this is three-pronged. First, look at your traits: one or both of the attributes associated with the trait line that contains traits improving that weapon will usually be the attribute(s) that benefits that weapon the most.

Next look at the skills the weapon provides, especially the auto-attack. If it inflicts conditions, you probably want condition damage and some condition duration. If it attacks quickly, you may want a lot of precision, to try to rack up a lot of bonuses from crits. If it heals you somehow (necromancer dagger, guardian mace, elementalist water daggers) you may want healing power. If its attacks are slower and don't have any particular other attribute benefiting them, you probably want power. Usually you should be ending up with one (or both) of the two attributes you identified in the first stage; if it's not, proceed carefully, as this may mean you're not imagining playing that weapon the way ArenaNet designed it to play.

Finally, if you still have attributes you can be boosting, take a look at the attributes that synergize well or would cover some of your weaknesses. If you're boosting condition damage, condition duration tends to work well. If you're boosting precision, a little extra crit damage % goes a long way. If you're pumping power, a little precision can help noticeably. Alternately, cover your weak areas. If you're heavily invested in an offensive trait line and have pushed a bit into a 2nd offensive line, consider going relatively deep into a defensive trait line to pick up some toughness or vitality. High vitality builds also probably want healing power, so they can actually restore all those hit points.

Lets take scepter for the necromancer as an example. First we look for the traits that improve scepter; we find them in the Curses line, which boosts precision and condition damage. Next we look at the scepter's basic attack and notice a decent attack speed and not one but two damaging conditions inflicted. Condition damage will definitely be our primary damage stat, and since boosting its trait also boosts precision, we'll want to keep an eye out for ways to cause conditions on crits as well as further precision boosts. Finally we consider other attributes; with all those conditions & condition damage, some condition duration would be helpful, and some extra power, which condition duration shares a trait line with, never hurts. We may also want to grab a defensive stat, though, to try to avoid being a glass cannon; if we've got anything with lifesteal in our off-hand it may be worth grabbing vitality & healing, otherwise I tend to gravitate towards toughness.

Here's the build I use on my scepter necro (off-hand warhorn, staff secondary) in sPvP: 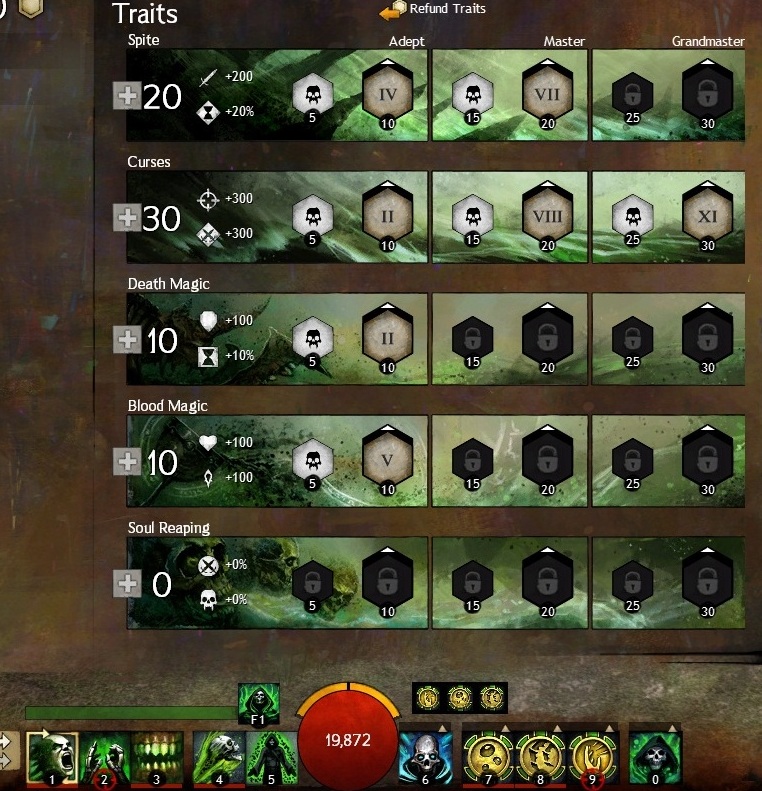 One such resource is Noxxic, but there are many others.

Using Noxxic in this example, you would simply select your profession from the drop down followed by the type of build you want (Control, Support or Damage) and you will receive suggestions on weapon types to use and which statistics you should be stacking; 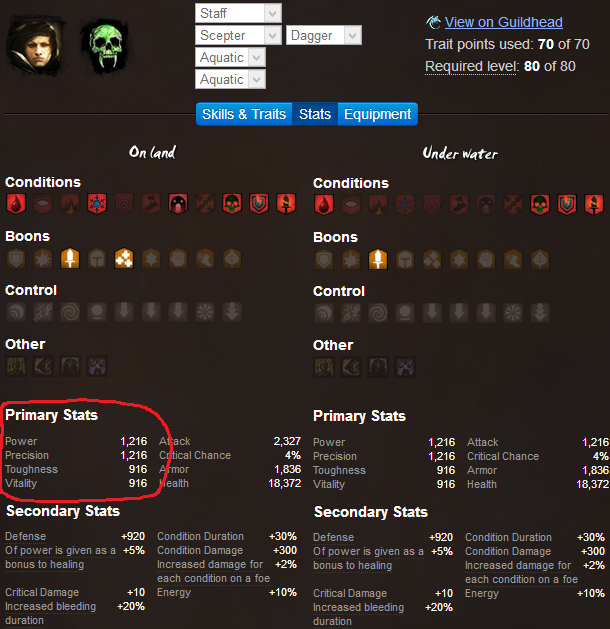 As you can see from the above, this site already contains a large amount of the statistical information you're asking for but without spending time testing and theorycrafting.

10
What are each race's racial skills and how do they work?
7
How do your 'F1, F2, ect..' skills work?
7
How do multiple combo fields interact with finishers?
5
What to do with skill points once you've unlocked all skills?
5
How can I set up my skills for use underwater?
5
How do critical hits and on crit effects work with Trick Shot?
1
How does Stability interact with conditions?
1
How do I deal with Warrior stuns?
3
How do I play with my friend in Guild Wars 2?