In Prison Architect, how do you set an area to be accessible only to staff

In Prison Architect, I heard that in Alpha 10 you can set an area to be staff only.

How do I do that? Can it be used to prevent escapes?

This requires a Warden - to unlock the Chief - the Chief, and offices for both.

Once unlocked, you get access to the Deployment tab in the menu bar, which offers a bunch of selections: 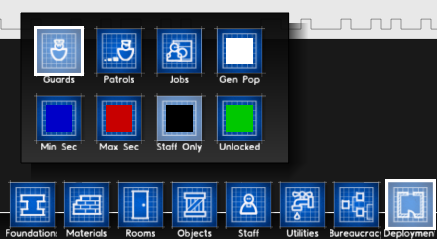 There, select "Staff Only", and click on the area you want to change:

This means that only staff are allowed to enter this area (in this case, the Chief's Office) on their own - Guards can still escort prisoners through these areas, and staff will not avoid secured areas, just because a staff only route is available.

As such, yes, it can be used to prevent escapes (hints from the Deployment wiki article:)

Also: This is not a new feature of Alpha 10. Alpha 9 introduced the new Jobs feature, but this has existed for a while before already.

it's in the deployment tab, available after you researched it in the chief's tech tree