How can I import patterns via QR code?

I've seen tons of Animal Crossing: New Leaf patterns posted across the internet accompanied by QR codes, implying that there's a way to scan those QR codes in-game to import those designs. However, I can't find any sort of import feature in the game.

How can I scan QR codes in the game? Is it something that I have to unlock?

Usage of QR Codes is unlocked at the Able Sisters clothing shop after becoming friends with Sable. If you've played previous entries in the Animal Crossing series, you might be familiar with this process: you simply chat with Sable at least once a day for a number of days, and she gradually becomes more friendly with you.

As far as I can recall, this is the first game in the series that rewards you for going through this friendship process.

Update: I've been speaking with Sable every day for 10 days, and now the QR machine has been unlocked today (which would have made 11 days if I had to continue). I spoke to her for 10 consecutive days, so I do not know if this will also work if you skip a day. Lyle and Nook had a short conversation regarding the Able Sisters when I visited them yesterday -- I'm not sure if the friendship process unlocked that but I think it is probably an easter egg.

At any rate, the QR machine looks like a large sewing machine that sits on the back wall near Sable. When you attempt you interact with it, you will open dialog with Sable. 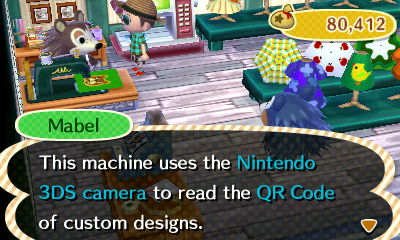 Instructions to read QR codes are as follows:

The displayed design will then become one of your 10 patterns.

QR Codes are unlocked after presenting one character out of the four main Inhabitants to Sable, the sister working alone. This must be done with 6 presentations and are not needed to be linear visits.

QR; When ever you see a QR on the laptop, screen it with the 3DS while engaged with the QR sewing machine and they will be retrieved.

-1
How do I unlock the sewing machine?
1
How to unlock qr codes?

14
Am I punished for playing with the game clock?
5
Are there still "item lists" at Nooks'?
7
Can I rotate patterns?
2
Do patterns on the ground prevent snow?
3
How to use custom patterns from Able Sisters?
1
ACNL Powersaves Not Working
1
How do I delete my town and player on Animal Crossing New Leaf
0
Animal Crossing New Leaf Random Time?
1
AC New Leaf: non-mayor player specifics