Are there any spacing rules for trees?

I want to clear out a spot for a small orchard near my train station so my visitors have immediate access to any fruits they might need. I'd like to make it as compact as possible. What are the minimum spacing requirements for trees to grow?

You always need to have at least one space surrounding a tree, so you can't plant it directly next to a wall, a house, or another tree. Doing so will just be a waste and the sapling will wilt and die.

As an easy test, make sure you can run in a circle around the hole that you dug for your sapling.

However, I have found that in this game, you cannot have a tree completely encircled by other trees when you plant them either (can't remember if this was the case in earlier games, but I don't think so), or it will not grow.

In order to avoid this happening, try to initially plant saplings in rows of 2, so you don't accidentally block in other saplings. After these rows have progressed to the first growth stage past the sapling, you're safe to plant another row (but not another 2 rows at once, as the first "new" row would then be completely surrounded again).

Note this spacing. It theoretically should work because each hole has a full space around it, including the center one. 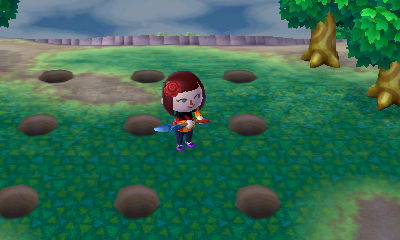 However, the next day, we see that the center one wilted and died. No matter how many trees you try to plant there in the center spot, they will die. 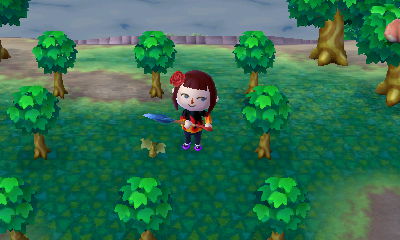 This will also fail even if you use staggered tree spacing instead of straight rows, like in the following image: 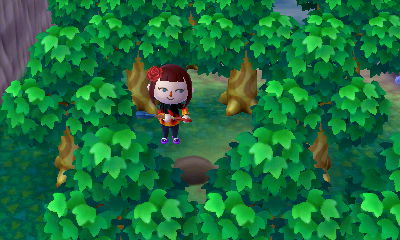 10
Is there a minimum spacing planted trees need to grow?

8
Do "acres" still matter for how I plant trees/flowers?
5
Are there still "item lists" at Nooks'?
5
Are there any bugs or fish to be found on main street?
6
Do fruit trees only ever drop fruit, even if there was no fruit to be picked that day?
8
Is there any upgrade to Shampoodle?
1
How many money rocks are there?
3
Are trees required in New Leaf to have a perfect town?
0
Is there a hard limit to the number of trees able to exist in your town smaller than what is geometrically possible by the rules of tree growth?
2
Will less trees mean a higher chance for bugs to spawn on the given trees?
0
Are there punishments for not playing for awhile?