D&D Mystara Arcade Games - What are they saying?

In light of the new re-release of Tower of Doom and Shadow over Mystara on Steam (and others) by Iron Galaxy, we have to ask ourselves one important question: What are the characters supposed to be saying in their voice clips?

The voice samples in these games are very low quality and heavily digitized. They are also authentic to their original versions from 1996, and have not been modified in any way for the remake. Some of the quotes are easy to understand, while others not so much. Most of the ones involved in spellcasting are simply the name of the spell being cast, so those do not need to be elaborated on. Here are a list of the voice clips in question, as well as the more obvious ones filled in with the uncertain ones left blank or incomplete.

The answer to this question is to fill in the unknown items. Please note that, although the horrendous quality of the sounds might seem as thought it requires some guess work and speculation to come to an answer, this is not an opinion-based question. There is a definitive, correct answer to this question that is supported by fact - the voice actors of the time were given determinable things to say in their script after all - it may simply be difficult or impossible to find out the truth. Please give guesswork if and only if you are very confident that you are correct.

Here are my types: 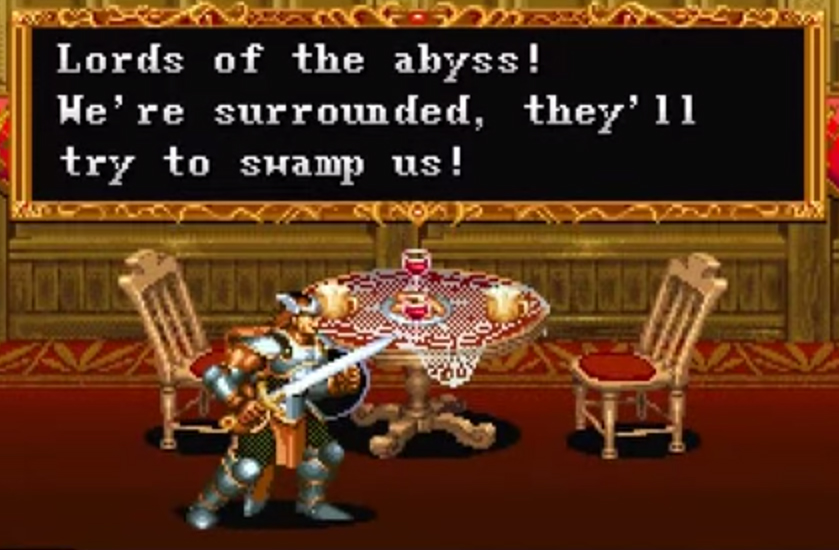 What you can really hear is "Alfic shadow!" though.

I've found an interesting discussion here: http://www.reddit.com/r/rpg/comments/2e6n6x/ven_or_vish_dnd_5e_goes_pretolkien/ which made me think that the word 'alfic' may be correct here. Please read this fragment:

[...]"The ending "-ish" evolved from the Old English "-ig", which marked adjectives. "-en" was a noun ending, so "Elven" was originally a noun, but Tolkien brought it back into use as an adjective. So, for correctness I would say "Dwarfish/Elvish*," for hyper-correctness I would go back further into Scandinavian languages and say "Dweric/Alfic [...] :D

Kinda funny curse that fit the dwarf's coarse nature. In polish language there is an idiom called "psia krew!"- which literally means "dog's blood!". It is used to express the anger (something like "Damn it!" in english). I can see the analogy here :).

She says 'goodbye' to mercy she had inside her- this is how I interpret it. However this may be some kind of an elven curse ;). I've also found the site, where this kind of phrase exist and it's related with a fantasy world, so there is a high probability that this is it: https://forum-en.guildwars2.com/forum/professions/elementalist/Bye-bye-boon-duration

If I find something new I'll update this post. This was one of my favorite arcade game in the late 90' (man, I lost a lot of money playing it in arcade saloons back then :)). Thanks for reminding me it. Was a real fun to answer your question.

Not the answer you're looking for? Browse other questions tagged dnd-tower-of-doom dnd-shadow-over-mystara or ask your own question.