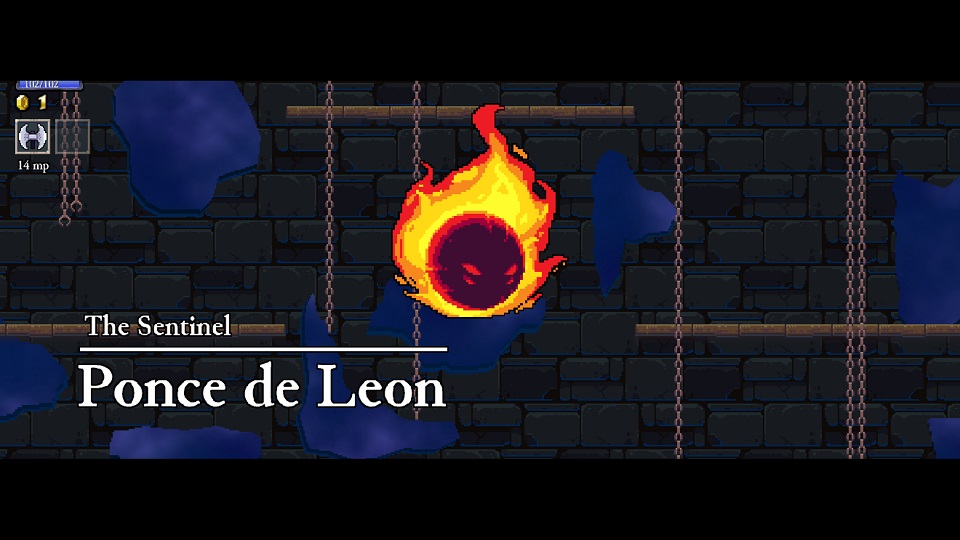 He's kicking my butt all over the room and I'm not good enough at dodging all his attacks to do hit and runs for 10 minutes. Are there any classes, spells, runes, or strategies that are well suited to taking him out?

A Sprint Rune or the ADHD trait (+30% speed) help against bosses. The Shinobi class comes with this extra speed by default. You also should take a Vault Rune (double jump); maybe even two. Two vault runes gives you unprecedented mobility throughout the game. (FYI Sky Cape gives two jumps)

Avoid Gigantism because it makes it harder to dodge flames. Also avoid Dwarfism because it makes it harder to safely hit Ponce. Vampirism/Siphon/Balance runes are great for keeping topped up before the boss fight, but in the case of Ponce de Leon, they are useless during the boss fight itself. (They however viable against the Dungeon boss, and great against the Forest boss)

If you're early in the game, a an upgraded Barbaian (Barbarian King) might be best because of his shout ability; it clears the flames if you get cornered. He also has lots of health so you have more chances if you mistakenly run into a flame.

If you have the upgraded Knave (Assassin), then you can use his sneak ability to simply walk through flames in a tight spot; his ability ALSO can be used to evade Ponce himself! With some Damage/Crit Chance/Crit Damage manor upgrades, he will make very quick work of any boss.

An upgraded Shinobi (Hokage) can also teleport/flash/blink through the flames. If you have quick reflexes, a Shinobi's Replacement Technique is the most mana effective dodge. He also does far and above the most damage in the game before you start maxing manor upgrades and acquiring gear (by then an Assassin or Spellblade are heavier hitting).

It all depends on your stats of course, but here are a few setups that helped me.

I found the archmage not to have enough attack power to kill him even if the time spell lasts longer.

I find Spellsword with the upgraded spells, preferably with the fire ring/shield, else chakram or dagger, and maybe even the sword wall can do well against any of the bosses.

Maybe get at least 1 flight rune for a bit of mobility.

Just spam the upgraded spell you have and only when you run low on mana do you have to do a few hit and runs, an Air Dash rune can also be useful for hit and runs, hit 'em once and the dash backwards, but with the fire and spikes around the room you may run into one.

Following a wide path around the whole room so you don't have to dodge as much fire helps as well, just running in a counter-clockwise square or something.

Another combo which hasn't been mentioned is Dragon + Dwarfism. The normal disadvantage of Dwarfism - the shortened melee attack-range - doesn't apply to Dragon class, since it's ranged-attacks only. Meanwhile, you're so tiny it's easy to fly around and evade pretty much everything.

I died to Ponce de Leon a few times before getting this OP combination, at which point I beat him without taking any damage.

I got quite frustrated by this one, came on here and neither of the barbarian/assassin classes worked for me (lvl 125) - disclaimer: I'm probably just terrible at the game.

Anyways, in case it helps anyone I ended up beating him with a Paladin who had conflux orbs. Spammed the conflux and I think knowing that he was always taking damage helped me focus on dodging stuff. Got some hits in as well of course and finally beat him.

I found Barbarian King (or Queen) with lots of health, a retaliation rune and double jump to be useful. Kill of the spikes by running into them and start running around the room uninterrupted. Run in as big of a circle as possible to prevent getting cornered by the flames. If you manage to get cornered by the flames, use barbarian shout to get rid of them. Hit the boss whenever he's moving slowly.

I simply got an arch mage with the flame barrier spell and moved carefully around the room, turning on the spell when Ponce got close enough to get hit. Mobility runes as suggested by others are very useful of course, and a retribution rune will kill off any spike balls you may hit. That's less of a priority though. The fight was pretty quick and painless like that.

I beat him with the following:

YOU BECOME SONIC IF SONIC GREW WINGS AND BREATHED FIRE.

All I did was get the Lich with flame barrier and sit in range. If I was about to run out of mana, I just used the health -> MP switch. I was level 158.

Not the answer you're looking for? Browse other questions tagged rogue-legacy or ask your own question.

19
Where is the save file for Rogue Legacy located?
15
What's the best way to hit the most targets in axe throwing?