I'm fairly new to league. I started playing with Warwick and really enjoyed him, but I got bored of him very quickly. I enjoy fairly high health, strong, carry champions with good CC and high kill farm and champion kill rates. I've recently been playing Cho'gath and been thoroughly enjoying it.

I've been building him as a pure AP carry. I get items such as abyssal scepter, rod of ages, Rabadon's Deathcap, etc. I sometimes swap out the abyssal with a magic resist or high armour item based on situation. This gives me tons of AP and therefore my vorpal spikes does a lot of damage.

However, I also realized Cho has one of the highest AD stats in the game at level 18. Therefore I was wondering if it was worth doing an AD/AP hybrid build on him. He already gets tons of health from feast so is naturally fairly tanky and hard to kill. Does anyone have experience playing Cho this way? Or do you guys have any recommendations on good AD items to get to go with my current AP build?

Any help would be greatly appreciated! I am thoroughly enjoying the game and playing with Cho! Also if you guys have any tips on fun champions to try based on what I've described that would be awesome too! Thanks!

In reality you can play any champion AD, ( for example i've ADC'd as ahri back when you could still random pick after the client crashed.) AD being Attack Damage is usually just based off of entirely basic attack damage. Unless of course your trying to be an AD caster which would require a high AD ratio for your spells which Cho'gath obviously doesnt have. So in other words yes you can be Chog'ath AD having a silence and knockup with a little extra AOE and a painful true damage ult, you could easily close the gap on a normal ranged ADC, if you go bottom lane try having a support that has a stun or root of sorts. Just build pure AD/AS, Berserker boots, Ifinity Edge, Bloodthirst, Phantom Dancer, etc. Might wanna rush Frozen mallet for the slow, so when you get them close they can't get away easily.

If your hell bent on trying to use Cho with AD try going more Hybrid, so items like rageblade, hextech, and trinity force.

The real trick is actually getting fed fast enough to beat a champion who is built more for AD. I would max Cho's AOE attack first to get all the CS I could and try to force him under his turret to starve him, and you'll need to ward well if you plan on keeping him under his tower. And if it fails expect harrassment for being a troll, being this would be considered a troll build.

Cho'gath has very high AP ratios (this means that he scales well with lots of AP) and investing money in AD items are wasting his superior AP/Tank potential.

Here you have table with how much DPS AP hero can deal and Cho is at 6th place! This is to damn high :) source in Polish here. 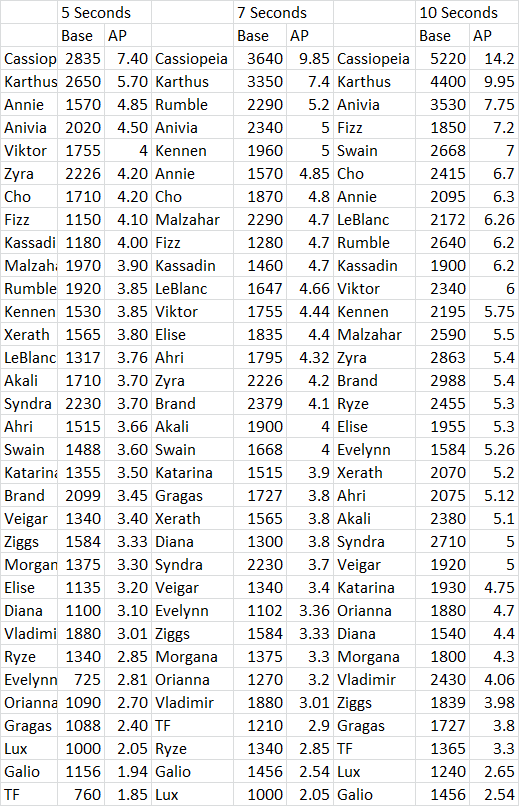 I will suggest you checking out Darius, Hecarim, Renekton, Singed and Wukong.

All this champions can carry games especialy first two Darius (or OP-early-and-mid-game-sh%#) is something most similar IMHO to Warwick kit (slow, big damage, pulling-CC skill) but he don't have so much sustain.

Hecarim on the other hand if builded (Spirit Visage + Iceborn Gaunlet FTW!) good way can carry, with his CC and sustain from his W skill, in lategame teamfights so hard that enemyes will write "heca carry" and "gg heca". That is my personal expiriance :) !

Write if I can help you with other information. Good luck!

6
Why is Akali supposed to be overpowered in Dominion?
4
Does Cho'Gath gain stacks from ulting clones?
6
I always have trouble laning Veigar against Morgana, are there any tips or tricks that could help me with this lane?
4
What are strong counter picks to LeBlanc or similar AP nuke mid?
4
Is the new Bloodthirster Viable?
3
Hybrid Damage Lux
1
Dealing with Nasus carries as support
2
Dealing with tanks late game as vlad?
1
As a jungle how do i pick/play against a tank comp?