How do I get more crafting recipes?

I decrypted a message from a console, and it has done this. 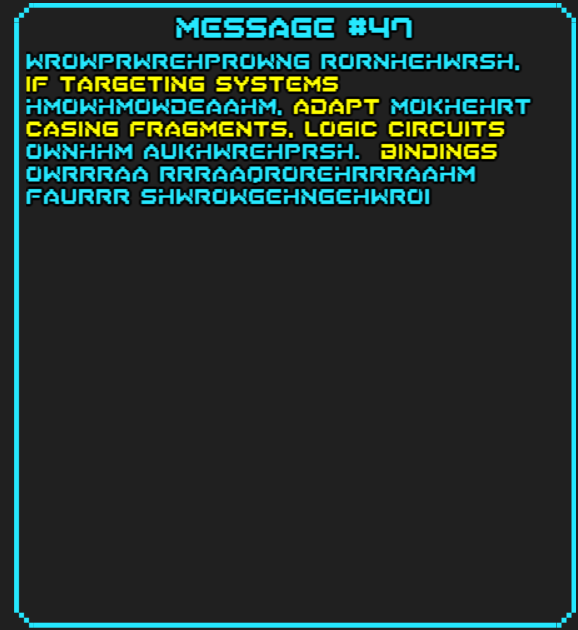 I don't seem to be able to decrypt it further, so I assumed this was a clue to a crafting recipe. But I put a casing fragment, logic circuit and bindings into a lab station and it said there is no such recipe. What am I doing wrong?

As you've correctly assumed, the recipes in the game are largely found through the messages decrypted during the course of the game. Messages, including partial messages, are recorded in your SotSPedia, and can be referred to and built up over multiple playthroughs. Having a high decryption and computer skill will increase your chances of finding and translating these messages into useful recipes. Each character can only attempt to decrypt each message once, and can only decrypt messages they have found, but they can view the other messages built up by your other characters at any time.

As you can probably guess, the yellow text is the translated message, and the blue text is the untranslated part. Your mistake was assuming that the untranslated segment between logic circuits and bindings did not have another ingredient hidden within it. Your choices are to continue on and hope you find that message again, giving you another chance to decrypt it, with either that character or another one. Alternatively, you could attempt to add ingredients to the three you know, in an attempt to discover the recipe without relying on the messages. Lastly, you could search internet resources in order to discover recipes. In that vein, the below is the spoilered, completed recipe, should you desire to know the missing parts of the equation.

The recipe in question is, as pointed out by Lyrion, the one for the Targeting Helm, which increases your skill with long range weapons. The ingredient you are missing is optics.

If you want to discover all the recipes yourself, without the help of some external guide (such as The PITopedia), there are a few options.

First, trying to combine everything you find. This is quite lengthy due to the numbers of combinations, but it can yield interesting results.

Second, decrypting stuff from consoles (having high Decypher helps). Completely decyphered messages (and recipes too) are shared across all playthroughs. However, sometimes you wind up with an incomplete recipe and you either have to guess what is the rest of the ingredients or hope that you find the message again. The recipe you found seems to be the of the not fully decyphered kind with a missing ingredient - so fragment, circuit, bindings and something else.

Not the answer you're looking for? Browse other questions tagged sword-of-the-stars-the-pit or ask your own question.