If I farm a money rock with my Mayor character, can my boyfriend use the same rock, later during the same day, on his character for money as well? Or will a new random rock be his money rock?

Or will he be left out in the cold (because he can't afford a house)? 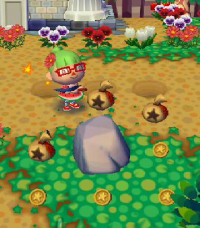 Each player gets their own random money rock. I tested this to be sure.

6
How can I best maximize my rewards for the Bug-Off Tournament?
5
Will the rocks regenerate over time?
2
Do you have to pay off each loan all at once (not including the down payment)?
9
Planting money trees?
6
Does Item luck from Feng Shui have any affect on when new items appear in Re-tail?
4
What would cause a second 100 bell coin to show up instead of an 8000 Bell bag from a money rock?
1
How many money rocks are there?
7
Where does my Piggy Bank money go?
3
Does the Golden shovel still make rocks give ore?
1
AC New Leaf: non-mayor player specifics