How far do I have to place torches so that mobs will not spawn near me?

Since torches prevent mobs from spawning, is it possible to place enough torches within a specific radius to ensure safety during the night? I'm thinking of a situation without any shelter built, more along the lines of a flat plain. If it is possible, how many torches/how far out do I need to go to make that area safe?

You can expand this to two dimensions by placing a second line of torches 7 to one side and offset by seven.

In a straight hallway torches placed on the floor can be 13 spaces apart safely. But in an open area they should be 12 spaces apart, then offset 7 spaces and then 6 spaces, not 7 and 7.

This is confusing until you draw it out. In my examples below the grid on the left is the previously recommended and incorrect 13/7/7 offset; notice how it results in squares with 7 luminance that trigger mob spawns. The grid on the right is the correct 12/7/6 offset resulting in minimum 8 luminance across the board. The green bordered area shows how both 12 or 13 spaces apart are fine for a straight line. 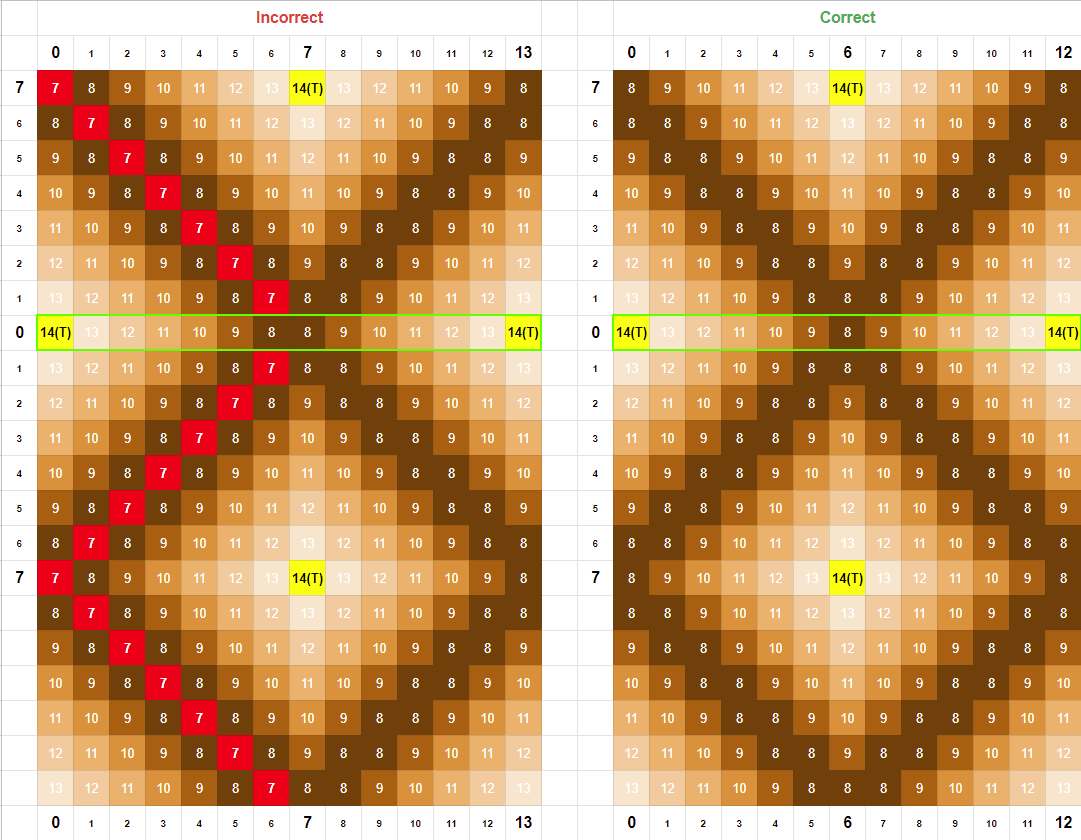 This assumes a level area. YMMV on uneven terrain or elevation changes, so you'll have to double check darker squares' luminance using F3. Once it gets level again you can resume the righthand pattern above.

For an extreme example, torch performance in diagonal/zigzag hallways also depends on where you place the torches. Torches placed on the floor are most efficient by far, illuminating their floor square at 14 and safely lighting 12 intervening spaces between torches. Torches placed on the walls are dimmer and must be closer together, only illuminating the floor squares under them to 13, and safely lighting only 9 intervening spaces! So if you're short on torches place them on the floor. 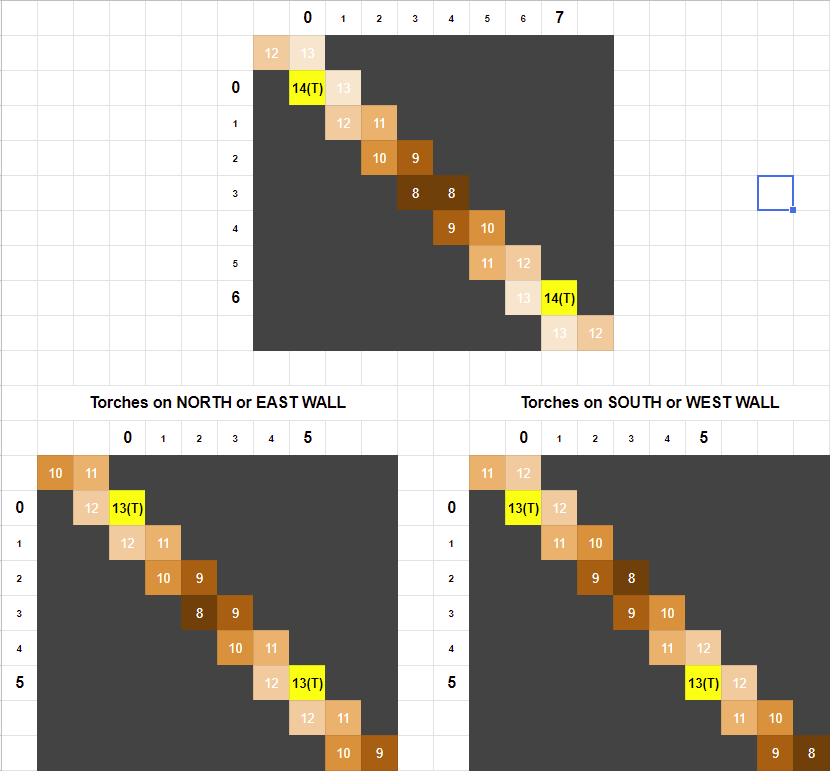 Mobs will spawn in areas of light 7 or lower. Source

Torches provide a light of 14, with the light value being reduced by 1 for every tile away.

Consider the line of light values above. The 14's are torches. If you put the torches no more than 12 squares away, you will prevent any monster from spawning in a straight line; do note however, that if you go with a strictly grid based system, you will have dark "centers" made from the torch squares. I recommend a staggered grid, each line "shifted" 6 squares from the other, so that the light values prevent the centers from getting to dark.

Using these measurements, it looks like you would have to make a grid of torches 13 squares apart that covers a 144x144 block area (excepting the no spawn circle around you, if you like).

All surfaces that are either not a full block (like dirt or stone etc),are leaves or glass of any color or if their are any redstone components that arent full blocks. There is also a "mob cap" where the amount of monsters is so great that the game wont attempt to spawn any anymore, there are ways you can abuse this(nametags, shulkers, and enderman and some others) you wont need to worry about this unless your doing some weird stuff with mob farms or something along those lines. Spawners have a area around them that they check for to see if they can spawn mobs. for example if you have a zombie spawner and their are numerous zombies within the 8x8x3 area they wont spawn. There are alternate sources of light like nether portals and mushrooms but these are mostly impractical.

55
What can I do to secure my towns/castles/hovels from climbing spiders?
15
How far should I place torches in a planar huge room?
14
Safest minecart tracks for after-dark travel?
8
How do I get monsters to spawn in a certain place?

15
How far should I place torches in a planar huge room?
10
How does Height play into hostile mob spawns?
14
What are all possible ways to stop a zombie from despawning?
6
Do amplified worlds have any flat areas?
7
Minecraft: Are light sources additive?
3
What's the best location for the player to spawn slimes in these 4 chunks?