What items can be sold on Steam Marketplace?

I'm a bit confused - can I expect to make steam money off of items which drop in game?

The Market is still under development. More items are likely to be added later.

One way to put an item up for sale is by going to the Marketplace and clicking "Sell an item".

This will show you the eligible items for each game (and steam, overall). change the game filter by clicking on the game you want to see items for. 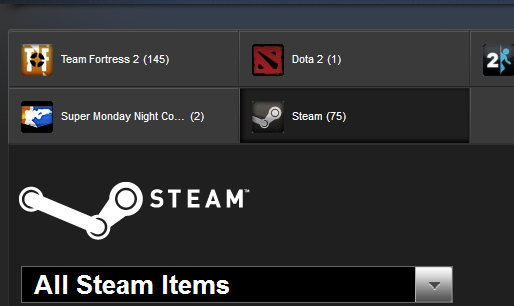 You choose the amount you want for it, then Steam will add a bit (as well as the game in some cases).

There are rules, however.

It is possible to make a little money off the Marketplace. I sold a few trading cards and had $2.50 to buy System Shock 2 with :)

It is a combination of both. It depends depends on the game. For TF2 the items can be found, awarded as a pre-order gift, or received from a crate (they key either traded for or bought from the store)

can I expect to make steam money off of items which drop in game?

People may find these items outright, or they can find Mann. Co. Supply Crates/Chests, then unlock them with a purchased key. The keys are $2.50, but the value of the item could potentially be more, so they try to sell on the market.

Aside from keys/crates/cards, most of the items sold are genuines (which you usually get as rewards for pre-ordering other games) and unusuals (which have to be unlocked from crates, which require a key, which costs real money). You can sell some strange weapons and tools as well, which are dropped, but they tend to sell for very little.

About 1% of crates contain an unusual, the rarer of which are worth lots of money. You could buy lots of keys and lots of crates and hope to make a profit in the long run, but the fact that there are others doing this, combined with the laws of economics, means that your expected net income would be very small.

(In fact, there is a whole TF2 black market where keys bought/sold using stolen credit cards. Because of this, your expected net income will actually be negative)

So yes, you can make a very small amount from some of the random items which are dropped. But no, you shouldn't expect to sell any of them for anywhere near $10. Those are typically the ones unlocked from crates (which cost keys = money), and you can't expect to make an overall profit from them (unless you get very lucky in your first few crate unlocks).

9
What TF2 items can I sell to the Steam Community Market?

6
How do I buy Team Fortress 2 items outside of the game?
10
How does the Steam Marketplace work?
29
What use are Steam Trading Cards?
12
Do Steam codes need a physical disc?
1
Do TF2 purchases make me eligible for Steam trading?
5
Time during which steam prevents the sale of items unless I buy more games
13
What is the most profitable way to sell steam trading cards: as-is, or turned into gems?
6
Is there a way to list my removed games on Steam?