What are the tiers for characters in Street Fighter 4?

What do people call the 'tiers' for characters in Street Fighter 4 and what are the reasons for some characters for being in higher tiers?

Character tiers are used to describe the strength of every character in comparison the rest of the cast. Basically someone (or a community of players) rates or defines the outcome of every possible matchup between two equivalent opponents.

This is usually done with the best players of the world in mind. This means the rating assumes you know your character by heart, you know how to play every matchup and your execution is top notch.

Then these ratings are entered into a matrix and the sum of all matchups for a specific character is their overall "strength". The characters are ordered by their strength. Then different groups are defined, based on their strength. If there are big gaps, then this is considered the border form one tier to the other. Otherwise the border is arbitrary.

In SF the tiers are usually S, A, B, C, D,... S being the highest. Sometimes people even differentiate within a tier and the best within a tier are considered for example A+ and the worst A-.

A tier only tells you how good a character is on average against the whole cast at top level.

Here is an example of a tier list for SSFIVAE2012 taken from Eventhubs. It is not considered completely accurate anymore, as new "tech" was developed that changed the ratings. 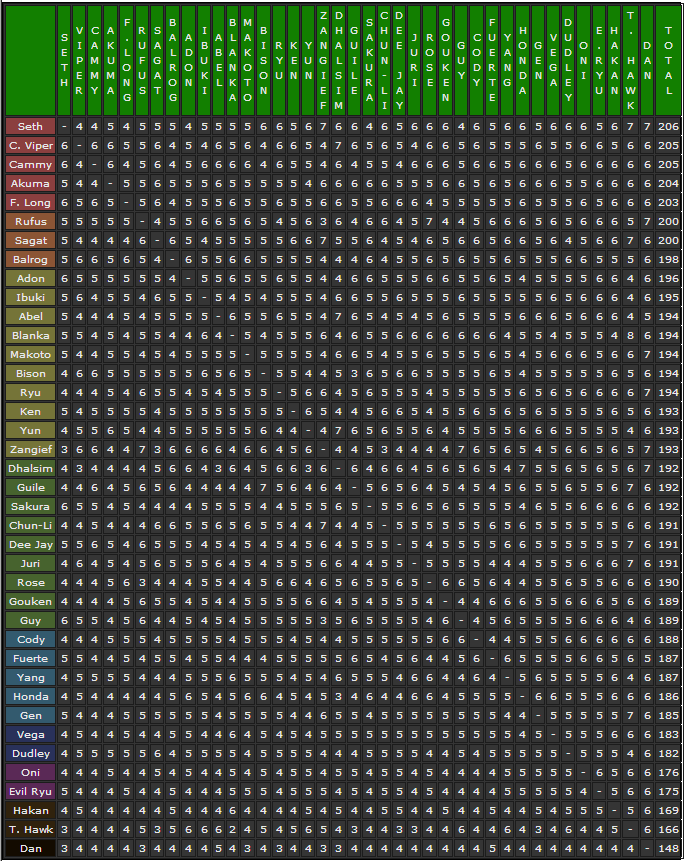 As already stated only the ratings of specific matchups are relevant for the tiers, still here are a few important attributes that most of the top tier characters have in common.

One more thing: Tiers are only important for tournament players, as they cannot choose their opponents and 1 or 2 losses mean elimination. Average Joe that plays against his buddies and online is not concerned by these. Online you can always choose not to play against your opponents. Say you are T.Hawk, you can select your opponents only to be Balrog, Ibuki and Adon then you would even have the advantage.

Just to put this in perspective: While the result for a best of one is stated in the table, the results of longer set are way more extreme. Most tournaments play best of 3 up for qualifications, then switch for best of 5 or best of 7 in the finals (or round of 8).

These lists are all wrong and no character can be scientifically proven to be better than others. Hakan is amazing and can beat Seth easy. Hakan should be near the top

3
Where can I find official data on character frame data and hitboxes?