What do Civilians do?

In Civilization 5, I noticed that all my cities have "civilians." The longer the city is well and the more food it has, the faster I gain new "civilians." What bonus do I get from having these civilians in my city?

There are a couple of similar words used in Civ5 for some very different concepts. I believe what you are describing are Citizens: 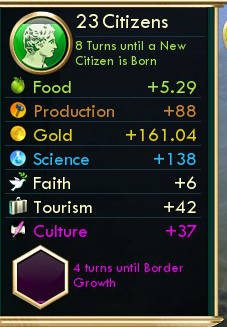 Citizens represent the population of a city. One citizen can work a hexagonal tile within the city's radius, or they can work in a building as a Specialist. Citizens working tiles produce some combination of production, food, gold, science, faith, or culture, depending on what tile they are assigned to work. Specialists will produce some of these as well, but they also contribute to Great Person production.

By default the game will manage your citizens and specialists for you, although you can manually manage them in the city view if you wish.

The citizen count increases as you produce more food than you consume. After producing enough excess food, another citizen will join the city. Citizen production is halted when producing Settler units, and severely limited when the civilization is unhappy.

The more citizens, the more tiles worked, the more productive your city is, the faster it will grow and produce buildings and units. However, citizens also contribute to unhappiness as city size grows. This unhappiness modifier depends on your difficulty level and several other factors. You can see the unhappiness due to the number of citizens by hovering over the happiness indicator in the status bar at the top of the screen.

Civilians, by contrast, are units represented by downward facing triangles as they move around the world map. Civilian units include Workers, Settlers, Great People, Missionaries, and so on. Civilian units cannot fight, and will not defend themselves if attacked. In certain situations they can be captured, notably Settlers and Workers will both become captured Workers if attacked.

40
What is the formula for city connection income?
10
Is there a way to figure out what cities have wonders?
6
What does the turns required to build a unit / building depend upon in Civilization V
23
Why isn't my city growing?
19
City specialization
8
Do Empire Cities and City-States have the same amount of health?
2
What defines the boundaries of a city?
6
What will happen if you build cities more than the built-in names
20
Is Infinite City Spam a good strategy on Immortal/Deity in Brave New World?