How do I stop a Blaze spawner from spawning blazes?

I want to make a Blaze farm but they keep spawning even if I put torches on the sides . What can I do to stop them spawning?

What blocks immediately neighbor the spawner is irrelevant, it will still try to spawn mobs across its area of influence.Spawners place mobs at three levels - one below, the level of the spawner, and one above, and can spawn mobs in the air. Horizontally mobs spawn anywhere (not aligned to blocks, just anywhere) within 8x8 meter square centered at northwestern corner of the spawner (one with lower coordinates). So you'll need to light up four blocks in every direction, and don't forget the layer above.

Torches give light level 14, so one torch blaze-proofs two blocks in every direction (diamond-shaped) on the given level, or one in every direction if it is one level below, or just the block above itself it is two levels below...

To hell with it, it is much simpler to just show: 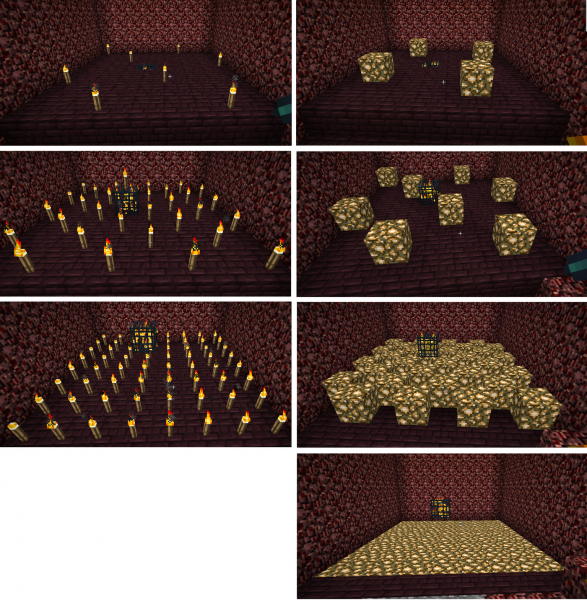 1
Do cave spiders only spawn from their respective spawners or do they also spawn naturally in abandoned mineshafts?

2
Why doesn't my technique stop spiders from spawning
10
How to prevent slimes from spawning in certain areas
6
How do I stop bats from spawning?
2
Blazes still spawning in light!
3
Preventing Iron golems from spawning outside the spawner platform?
1
How can I elevate blaze, without using lava?
2
What lava stream layout will disable a blaze spawner?
1
How to get rid of blazes near a spawner
1
Mob Spawner not spawning anything