How do the pre-signals work in OpenTTD? [duplicate]

I'm reading their Signals article on their wiki, and it's still not 100% clear to me.

I'm trying to (and failing) to understand the Entry signal, (and subsequently, the Exit and Combo signals, because Exit "Works the same as Entry but..." and Combo "Combines Entry and Exit").

So here's what it says on Entry signals:

Can anyone please provide a clearer explanation, and perhaps tell me how do Exit and Combo relate to it?

The best way to illustrate this would be to use an example. Say you have a station with two platforms, and two sets of signals A and B. 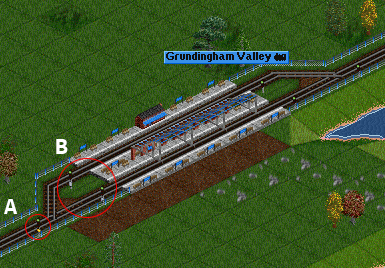 If you use normal block signal here, and both platforms are occupied, the signal at A will be green, allowing the next train that comes along to move into the track between A and B. This is bad because if the train from the other platform were to finish and move off first, the train will still be stuck behind the other train, unable to move. This is clearly inefficient, which is where pre-signals come in.

A combo pre-signal is basically a combination of the two. It's useful if you have a large station with many more branches, like the one shown in the wiki: 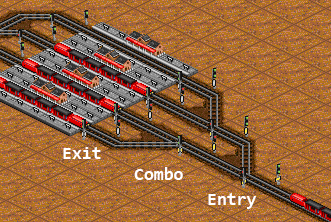 In this case, the next train will move up to the topmost platform, and the first entry pre-signal will turn red, preventing any more trains from entering the tracks between the exit and entry pre-signals until at least one of the four have moved off.

Not the answer you're looking for? Browse other questions tagged openttd .

43
Can someone explain me OpenTTD's train signals quick and easy?

7
OpenTTD Jukebox?
7
OpenTTD: Semaphores
3
Why aren't my entry/exit signals working correctly?
10
Why won't my train go to the depot for regular maintenance?
6
Pre signals are green when all exits are red - OpenTTD
7
Path based signalling with dual-sided stations
4
OpenTTD : How to save complex rail block with signals to use it on other stations
7
Why is this entry signal showing green?
0
Can you synchronize & time signals over long distance?
1
How do I close the console in OpenTTD?