Is Mario or Luigi the older brother?

I always assumed Mario was older than Luigi. However, I've heard that Japanese schoolchildren often assume Luigi is older because he's taller.

Is there any official source for which one is older Mario brother?

The Super Mario Wiki, while not an official source by any means, contains several quotes from various Mario games (SSB/M trophies, Mario Kart descriptions). Some choice excerpts from their entry on Luigi;

Bio: Mario's younger brother. Luigi is ready to race. His superb traction makes him harder to spin out.

Though often hidden in his older brother Mario's shadow, Luigi is, in reality, very popular. Taller than Mario, Luigi also jumps higher. Although he didn't appear in Super Mario 64, in Mario Kart 64 he performed to the best of his ability. For one who seems to always be in the background, he has many fans who eagerly await his appearance.

Luigi (Classic); Although Mario's younger brother has always played second fiddle, Luigi finally garnered the spotlight with his very own game, Luigi's Mansion. Things are looking up for the eternal understudy; he's even picked up his own rival in Waluigi. The day he's referred to as the "lean, mean, green machine" may not be too far off.

Luigi; Mario's younger twin brother. He's shy and quiet and overshadowed by his sibling, but he's actually quite talented. His jumping ability surpasses Mario's, and his all- around skills let him overcome any problem. He's a bit cowardly and really afraid of ghosts. Even so, in Luigi's Mansion, he was charged with cleaning up a whole house full of spirits.

Bio from The Adventures of Super Mario Bros. 3 Writers Bible;

Mario couldn't have a better teammate than his younger in age, but bigger in size, little brother Luigi, even though they approach their adventures with very different attitudes. Luigi always wishes Mario would take more time to weigh the risks before he leaps, swims, or flies into the unknown. But no matter how much he questions Mario's plans, Luigi always loyally follows him into the wildest dangers any Koopa could conceive. Luigi is your basic soft touch. A defender of downtrodden Mushrooms and Koopa-nabbed maidens. Naïve, trusting and innocent, Luigi is not a bumbling fool. It's just that he's so nice and straightforward, which allows him to be sucked into a Koopa scheme, a Toad prank, or a Mario madcap plan.

Luigi seems to be considered the younger of the two in any official material I can find. At least when there is any distinction, and they are not simply referred to as (twin) brothers.

Luigi is the younger brother; most recently this is confirmed in Animal Crossing New Leaf where the "Lil Bro Hat" is Luigi's and the "Big Bro Hat" is Mario's. I'm certain it's been referenced multiple times within Mario "canon" material but I can't think of an exact quote at the moment. IIRC Luigi refers to mario as "big bro" several times in his letters in Paper Mario though. 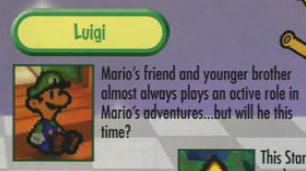 Luigi is the younger twin brother of Mario.

You didn't see the movie? On there, they referenced Mario as the elder.

Mario is older because in the dream team version mario is the older brother!

I have always considered Luigi to be the elder twin.But I did some research and Mario is in fact the older brother.

As you probably guessed already, the older sibling is Mario. They are technically twins but Mario is actually the oldest one. :8) If you have the Mario bros game on ds and wii they sometimes tell you that it's Mario.

L comes before M in the alphabet, as shown in my example above.
For this reason, I believe Mario is junior.

11
What are the Star Coins for in New Super Mario Bros. Wii?
6
Differences between Mario Bros for the NES and 25th Anniversary Super Mario Bros?
1
Are Mario & Luigi orphans?
6
How do you pronounce "Lakitu"?
20
Was Super Mario Bros. 3 all just a performance?
83
Has Mario and Luigi being plumbers had any effect on the plot of any game?
4
What was the first Mario game that featured taking down Bowser with 3 hits?
2
Is there a Mario canon, and what is the order of the games if there is?
17
What game is this red-haired Mario character from?
10
How long is a 'Mario Second' and is there a reason why it seems to be shorter than a real second?